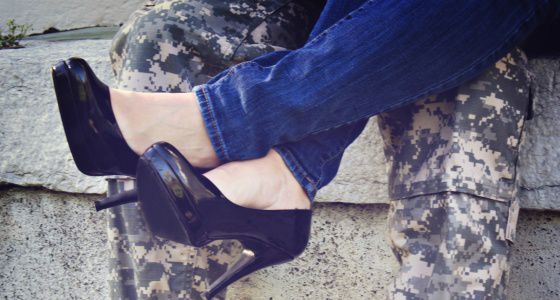 When I was a little girl, I was a die hard fan of the Indian Army. I used to think of our war heroes everyday. I wouldn't even blink whenever I saw the obituaries of Kargil heroes in the newspaper or the TV. Everybody was talking about how brave they were. It was the most inspirational thing I had experienced, and I also dreamt of serving the Indian Army one day.

I studied hard and got good results in class 10. I didn't waste any time in asking for my father's permission to join the army. But my dad laughed at me and said no. He made me pick biology and put me through the torture in Kota for two years. I didn't even get into a medical college after that. But I managed to get a BDS seat. I was doing this for my parents because they wanted a 'Dr.' prefixed to my name.

I thought at least I would find a man to love me. But all the people I loved only used me. I realized that true love didn't exist. My boyfriend was a coward who didn't take things forward until the end. We were still in a relationship when he got engaged.

I stopped trusting people. Instead, I decided to be independent and self-sufficient. I loved myself, healed myself, and focused on my career. I had always loved the army, and there is something about it that still attracts me.

There is a night that I remember very clearly- I was with a married friend on the night of Karwa Chauth. In the middle of the puja, I got a text. It was from an army officer with whom I had a mutual friend. I had sent him a friend request a long time ago and had forgotten about it.

This gentleman officer adorably asked "Ma'am, is there anything I can help you with? I would be happy to oblige," and I declined because I'm an independent girl, but I'm also a very big chatterbox, so I asked him about his life and talked all night long.

Something clicked between us. But he said that since I was single for a long time, I must be desperate for a boyfriend. I got agitated and cut the call after giving a big speech about men and their fat egos.

The next morning, I received a call from another number. It was him, and he had called to apologize for his rudeness. He had thought I was honey-trapping him. He then checked me out properly and realized that I was too cute and beautiful to harm him. Then started our eternal story.

We are both of the same caste, and in the next 20 days we decided to get married. We both talked to our parents about it but they disagreed. My father was very scared. He said that I should look for a more stable life, as the army life could bring too many unexpected jolts.

In the worst timing ever, tension began to grow in Kashmir, and tore apart my love story. I cried, but my dad did not agree. I convinced him that he was wrong but he wasn't willing to accept an army officer as his son-in-law. I never thought Indo-Pak friction could destroy my love story.

I love him and I would be privileged to be his wife. I have already dedicated myself to him and his love has made me strong. We have decided to stay together, hoping that God will show us a way some day. I'm keeping my optimism alive. I never knew that my childhood dream would bring me my fairy tale romance. I'm going to be 'Mrs. Capt. Dr.' one day.

Share this story because the army life deserves all our prayers.

I'm Still Uncertain About My Sexuality