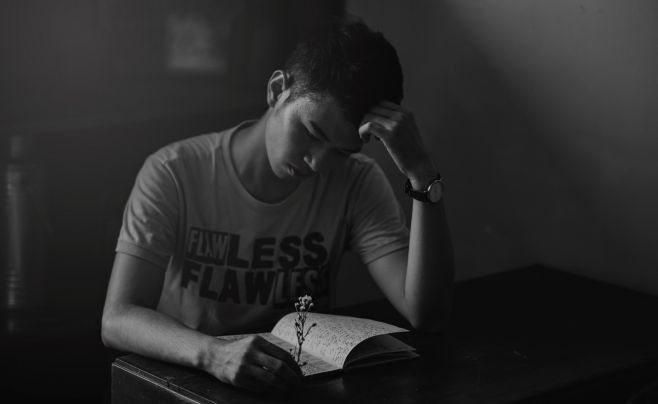 There I was, in a new place, where everybody spoke an unfamiliar language.

I felt uncomfortable, I felt misunderstood, I felt…lonely. Little did I know that this would lead to a chain of events that would lead me to Love and all the pain that comes with it!

I had a roommate who often spoke to me in English which gave me some respite from the social solitude, and I latched onto this “friendship”. I followed him around like a puppy and adopted his group of friends as my own. Although their clan never really made much of an effort to make me feel welcome and spoke to each other in Malayalam well aware that I couldn’t understand the language. Nevertheless, I was grateful for the company, and I did everything I could to feel like I belonged. I laughed when they laughed, and I was serious when the situation demanded. Keeping a keen ear, I began to understand a lot of what they were speaking, only to realize to my shock that they were bitching about me right to my face assuming that I couldn’t understand a word. Well, they were the only friends I had, so I chose not to react. I chose to keep my calm.

I did realize though that I needed new people in my life and that’s when I came across this girl Anusha. She was different from the rest. She made me feel comfortable. She even spoke English! I told myself that this was a friend I will stick with no matter what!

Anusha and I became pretty good friends, which didn’t sit right with my other “so-called” friends. All of them suddenly abandoned me. The very friends that I had sacrificed so much for had punished me so harshly. And for what? I still can’t figure what made them so act vehemently against me but whatever it was, it was not worth how they treated me.

That was IT! I needed a friendly shoulder to cry. Through this sad haze of confusion and desperation, entered Arpitha!

I had barely spoken to her before and I don't know why I vented out all my frustrations to her... maybe because she was good friends with Anusha. I really don't know, but I’m thankful she was there, and it happened.

I gradually drifted apart from the MALLU gang! My circle of friends started to change, and I was started to experience true joy again, thanks to Arpitha. Life began to make sense again. I was genuinely happy. But as we all know change is inevitable and good times rarely last, my heart started playing tricks again and...

I wasn’t sure about these new emotions back then, and we were too busy to talk about something like this, so I did what felt was natural…just continue being me. Be the friend I had always been. I would even tease her about this rich and good-looking guy to keep up the friendly façade going. During one of these chats, Arpitha wanted to discuss something serious, and I usually would ignore it or make up some lame excuse to cut short the conversation for the fear that my true feelings might reveal themselves.

But I knew had to be truthful to myself and that it was time that I acknowledged the Love I had for her, for the sake of honesty. I gathered my guts and took the leap – Told her upfront how I felt. Yep. I did it. I risked our friendship to tell her the whole truth.

This is where things were supposed to go better. They didn’t. Life had another painful twist. I expect Arpitha to understand. But she didn't. Instead, things began to go out of hand! She started ignoring me… And it hurt. I wanted to ignore her and hurt her just the way she was doing it to me. But that would have just made things worse and… I wouldn’t, scratch that; I COULDN’T be mean to her!

Anusha was worried about me and told me to give it time and that things will turn out fine. But 5 months had passed by and I asked “How much time is enough?” but she didn’t have the answer. I could never imagine a life without Arpitha, but reality has other ideas.

I also learned that she had started dating someone else... the same guy I had teased her about!
If only I had known that THIS was the SERIOUS thing she wanted to talk to me about I definitely wouldn't have said a word and would have just buried my feelings. Probably wouldn’t be writing this sad story today.

But what can I say, I really Miss her and I know I can't go back and change the things that happened. I wish things didn’t change so much. I wish she could have given me another chance (or maybe she did and I was too dumb to realize). I wish I could talk openly with her again. I wish I had just kept my mouth shut.

But then again, all I did was tell her THE TRUTH.

It's easy to fall in love. But nobody said that it will be easy. Especially, if the one you fall in love with is a friend. To choose between love and friendship is never easy but if we decide to take that brave leap, we have to understand that your object of affection does not owe you the same intensity of emotions.

Share this story because life isn't always fair. Neither is Love. But we live and we love.

YOURS GEEKLY
BAKKAR. CHAI. SUTTA
LET'S FACE IT
HOW'S THE JOSH
LIFE IN THE TIMES OF CORONA
STOLEN DIARIES