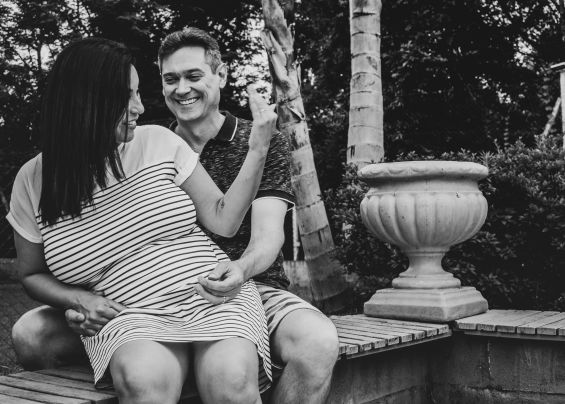 “We’re going to have a baby!” she said with a gleeful smile on that cute face of hers.

I was obviously exhilarated; I was going to be a father. Wow! It was all so new and exciting to me. I wasn’t sure how it was going to be or how I was supposed to handle it, but a FATHER? Scary, maybe but wow, again! My happiness knew no bounds, really. I did everything I was told to do by my Ma and mother-in-law, and even those scary looking books with weird diagrams in them. I don't know who asked me to put a betel leaf on her stomach, though. I thought it was a neat way to keep my excited wife in one place.

Pregnant women need rest, right? There were smiles all around the place, and Mubaraks given at the drop of a hat, but that was only initially. A month into the pregnancy thing, I learnt the most important thing about it. As it happens, "pregnancy" is not about having a baby. It's about being sick all the time. I mean it, just ALL THE TIME. It is a series of inconveniences for the husband and wife, in the name of  life-making.

One minute, you're trying to understand how on earth you created something that has a beating heart and consciousness; the next moment, there is puke. It began with the morning sickness. I knew that was coming, so I was mentally prepared for it. But soon it made me wonder- honestly, why  do they call it 'morning' sickness? It lasts all day and night! It's just... sickness. She had nausea, and it seemed like an eternity of tiredness and vomit all over the place, all the time. And guess what? It didn’t even make her feel better! I mean come on, isn’t throwing up supposed to give you some relief? I remember how good it felt those few times I threw up after I drank too much. But apparently, this wasn’t the case here. Suddenly, I didn't understand the human body any more. I didn't understand my wife's body any more.

Every time she threw up, or some new strange thing happened, I felt INCOMPETENT as her husband. I have always been able to fix any problem for her, but this one thing... I couldn't. Pregnancy kept capsizing my relationship with her and I was struggling to stay afloat.

And no, it didn’t stop there. There was pain, and those hunger pangs and cravings she had out of the blue at the oddest of times possible. She kept freaking out about something called 'pre-eclampsia' and I still don't know what it means (except that it isn't eclairs and it didn't happen to her, after all). On top of all that mess, she was on a never-ending emotional roller coaster ride! I don’t know when she cried and what she cried for. I had the last bite of the pizza without asking her and boom! The random outbreak of uncontrollable tears and sobbing terrorized me.

If men think PMS is an enormity, they haven't seen the "enormity" of pregnancy yet. The change is not just physical, but you're constantly in the company of a very vulnerable woman- a woman whom you love so much that your heart aches, and a woman you have suddenly stopped understanding.

It's the worst feeling in the world when your WIFE is crying and your arms are just not enough to comfort her any more.

There were times when I wondered if this new person was my wife at all, and if this baby-under-construction was being a villain to our marriage. Oh, and I haven't even mentioned those bitter stares that I got every time I did something that she was forbidden from doing. The stares became so painfully soul piercing that I had to hide to have even a beer; but the time she caught me with her hateful stare left me absolutely petrified. I was never so ashamed in my life. Even when my father had found out that I'd been drinking, I hadn't felt the fear and shame with such gravity. Suddenly, I felt like the rich privileged kid who was flaunting a video-game in front of the poor kid. The hurt on her face changed everything for me.

Honestly, which woman would like to put on oodles of weight, not fit in her clothes any more and go to the washroom  at least 15 times every night? "This sounds like fun," said no woman ever.

Then one day, I came home to a sight of mysterious rashes appearing and a weeping fat woman. That’s when it hit me. My pregnant wife, the love of my life- REPELLED me. I didn't know who I was looking at any more. This was NOT the woman I married or made love to. Suddenly, she had just become a presence that I had come to fear. Every time I was in the same room as her, I was instructing myself on "What not to do". You read that right. I couldn’t stand the sight of her puking or screaming or sobbing. It was driving me insane! I didn't know how to love my wife any more.

Isn’t pregnancy supposed to be a joyful process? I saw no streak of joy visible anywhere! That pregnancy 'glow' that all these movies talk about is an elaborate HOAX.

There was just a scary, bloated person who I was inadvertently bringing to tears no matter what I did. Yeah, you can think I was being a complete jerk! I don't know if I was really making her life more miserable or if I'm being a jerk for admitting that she made MY life miserable. I couldn’t help it. I did try to see beyond all the gooey disgusting mess everywhere, but I just couldn’t. Okay? Imagine living with someone who is that sick all the time. Does it sound like fun to you? I didn’t think so.

I’m just 31 and I’m going to be a parent for the first time. I like my alcohol, my sleep and my weekends. So, cut me some slack! I was new to it and yes, so was she. I don’t know how, but she seemed to be able to endure all of it without complaint. Maybe, it was just me. I don’t think men are wired to handle long-term drama and pain. Most of us can endure pain for short durations of time. Yes, I don’t have any of the biological parts required to produce a baby. But I don’t think I could have handled it even if I did.

I don’t see how I could ever deal with whatever comes with pregnancy. It is just something my brain cannot handle, let alone my body. It’s one of those woman things, I guess. They have the in-built patience and resolve to take all of that pain for nine whole months. Living normally while there is a human cooking inside you is not a joke; I agree. I feel guilty about giving her a cold shoulder and pretending all the while that this is completely normal; because it is NOT. It is nowhere close being normal. I’m just glad that her mother was there to take care of her because I couldn’t bring myself to do that. For once, I felt love for my mother-in-law. I could give her the world's biggest hug even now. She didn’t seem like the intimidating and spine-chilling woman that I usually find her to be.

That said, I was a jack-a** and a big-fat-chicken for being repulsed by my own pregnant wife.

She went through so much of it without my support. I couldn’t be pregnant with her and I’m glad about it, but we now have a beautiful baby, all thanks to her. All I did was provide the sperm. The best I could do after that was telling her that she looked beautiful and really mean it; and I did mean it.

In retrospect, I think her emotional roller-coaster was rubbing off on me too. I couldn't think of myself as the 'dad' to some person who I couldn't see. That 'person' is now called Rehaan and he pees on my shirts a lot. I am terribly ashamed of myself for being that useless wuss (that's the last time I'll admit it and I hope my wife takes note). I also have so much more respect for my lovely wife now, and I don't think I can ever stop saying that. She's going through a lot more because of motherhood. It affects her more than it affects me, and she's the one handling it. I love you. And I don't know what I would have done had it not been for the moments when you stopped me mid-rant and put my hand on your tummy. Feeling Rehaan kick inside you was often the perspective that I needed. Thank you, you lovely woman.

DIRTY PICTURE
HOW'S THE JOSH
BAKKAR. CHAI. SUTTA
YOUR STORY
The Golden Bird
LIFE IN THE TIMES OF CORONA