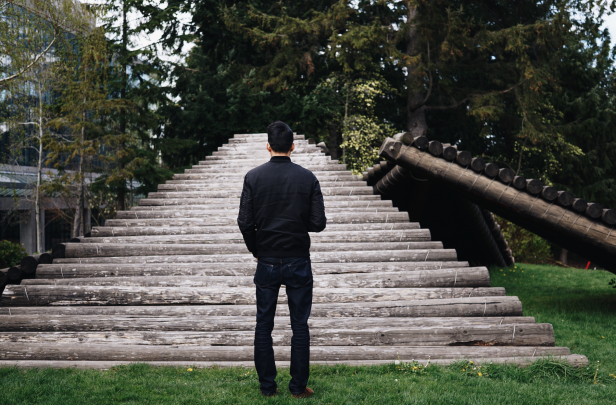 People do often talk about falling in love. I had no idea what exactly love was. I always used to think that love is just a waste of time. Well maybe because I had never experienced it, yet. I would always observe couples just holding hands and walking, but never understood the love between them.

I thought love was a joke, until love treated me as one.

In school time, I had a crush on a girl, but I don't know why, I just could not talk to girls. So obviously, I never confessed my feelings to her. In college, I thought now I should first make female friends than males ones. But I was still kind of nervous. I just didn't know how to approach girls. Speaking of boys, I approached them with ease. There was something hesitant in me when it came to approaching girls. Then, I somehow started to talk to girls who were friends with my other guy friends. Two years of college in, and I gained a bit of courage to talk to girls. Well, I finally did make some girlfriends. It felt good! I had been asked whether I have any girlfriend or not. Of course, I said no, because I didn't have any since I'd never fallen in love. As I entered my third year of college, I got introduced to one of my friends’ girlfriend. I didn't experience a spark that told me I wanted her to be my girlfriend, too. Well, I must say, she was good-looking though. We became friends, but it was all about only telling 'hi, hello' to each other, that type of friends. Time kept on passing by, and the third year got over. In my fourth year, I got her number somehow from her boyfriend, but for no wrong purpose. I just wanted to surprise her and wish her on her birthday at sharp midnight. Then, her birthday came. I did actually wish her at 00:00. She was shocked by how I remembered and I wished bang at 00:00. We started to talk to each other from that day. We would meet when we met our squad, which included my friend, who is her boyfriend. Later, we both got to know each more personally. She got to know how I was and vice-versa. One night, I came to know that she broke up. I didn't know why, which was anyway none of my business as it is. But later when I was talking to her, she didn't sound like how she did, normally. I figured this in the way she chatted with me because she usually never spoke in such a weird way. We were slowly getting closer, as friends. One day, as I was on my way home, I randomly bumped into her. She did not seem normal, and I knew why. I told her that I came to know. She knew I was trustworthy, so she told me the whole truth. I was shocked to know the reason why she had broken up.

She couldn't tell this to anyone, but she chose me. I supported her throughout during this dark phase of her life. She liked my support.

After she got over her break up, I don't know why and how but, there was some spark building within me for her. I didn't want to tell her that, thinking she'll unfriend me, because it may seem as if I supported her to get close to her but this wasn't my actual motive. So, for a while I didn't speak normally to her. She recognized this change in my voice when we talked. She told me to tell her what is going on with me. I told her that I'll tell her the truth only when we meet face-to-face, but neither on texts nor on call. We started meeting each other, just as friends. I later told her that I liked her because she was the first girl for whom I got a spark within me. I was so glad that she took it in a positive, mature way. And she knew I didn't support her to come close to her in the liking way, but I supported her in a genuinely good-willed and friendly manner, only because I wanted to turn that frown into a bright smile.

She told me straight up, that she didn't have any feelings for me. Even I accepted this with maturity and positivity.

As time passed by, we became best friends. We got to know each other inside out. With time, I started falling for her more and more, the liking transformed to love. I could sense that Cupid had hit me, but hadn't hit her yet. I needed to tell her how I felt, since we never kept things from each other, and always told each other the truth.

One fine day, I told her that I genuinely loved her. She was astonished. She earlier thought my liking towards her was just an infatuation, but she had no clue that it would change to love. She didn't accept it.

I still loved her even though I knew she didn't love me back. That day she just walked away from me. She told me not to contact her. I was sad. Even though I was always afraid of this happening someday, reality hit me hard when it actually took place. I didn't expect her to come back, but it was not easy for me as I lost my best friend. We met once and she told me that she was scared the way her past was with her earlier boyfriend, who ended up being a jerk, and she didn't want the same to happen with me. She knew I wasn't a jerk, but in the beginning, her ex-boyfriend was also nice and gentle, just like me. I told her that all relationships are not the same, but it was her choice to make. She later accepted that she also had a soft corner for me. I was on cloud nine that day! We started dating after this. Went to candlelight dinners and late night movies. We did all that a normal couple does. Years kept passing by just like this. I went ahead and found success in my career, she excelled in hers.

Then came the time when both of us reached marriageable age, according to our respective families. We didn’t mind it and arranged for our families to meet. They were happy with the alliance, too.

Everything was going on smoothly and perfectly. But then, just a week before our wedding, I felt that she wasn't being her usual self with me. Her behaviour had changed. She later confessed that she loves someone else. I was devastated! Even her parents were fake. She didn't want to lie to me anymore.

She told me the truth, that she had to marry me only because of her parents, and not by her own will. This felt like a bullet in my heart!

Her happiness was always my priority. I walked away from the love of my life so that she could be happy. I didn't want to step in her way. She left me. I was heartbroken. I now recall how I did not really understand love and treated it like a joke. The tables have turned now, not only has the love of my life let go of me, but love itself has treated me like a mere joke. I was hoping that this was all a dream, not reality. But I had to face the harsh, bitter truth that life threw at me.

Although, I was happy for the one thing that I always wanted: to see her prosper in life.

So what if it was with someone else, I was also kind of glad to see her happy. It felt good to know that at least I am not faking love or sustaining a dead relationship. She bruised me with the truth. And that scar will never ever go away. It will never leave my mind, and of course, never ever leave my heart.

This time in my life taught me the real essence of karma. I had never believed in it, but now after I had treated love as a joke, I got a taste of my own medicine.

It was a good lesson for me. I realized that we were more than friends, but it was only one-sided. I blocked her from all social media channels. I just didn't want to maintain any kind of contact with her. After a couple of months, I got a call from an unknown number. It was her. She told me that her husband had left her because he was cheating on her with someone else. I had a smile on my face as I recollected that this is how she treated me, and now she got a taste of her own medicine. But since I always wanted her happiness, I felt bad, too. She then asked to meet me, but I didn't want to meet her. She knew why I didn't want to. She had now realized how I must have felt after what she did to me because the same thing had happened to her. One fine day, we bumped into each other again at the same place where we had happened to meet, earlier. It gave me all the flashbacks, once again. A weird sense of awkwardness was there between us this time. I still cared for her and in spite of being angry with her, I asked her how was she doing. She just hugged me suddenly and said that she wanted me back.

I told her that she should not expect anything from me anymore, since I wasn't interested in her, after what had happened between us. I walked off after dropping her home safely. This time she was hurt and my wound had almost healed.

Today, I am 28 years old. I am happy that my work is fantastic, and I have attained my life goals. I am content and always show an expression of gratitude to God for giving me such a loving, understanding and caring family. I do miss her, but I have moved on now. This is my story.

Share this story because it serves as a reminder, what goes around indeed comes around.