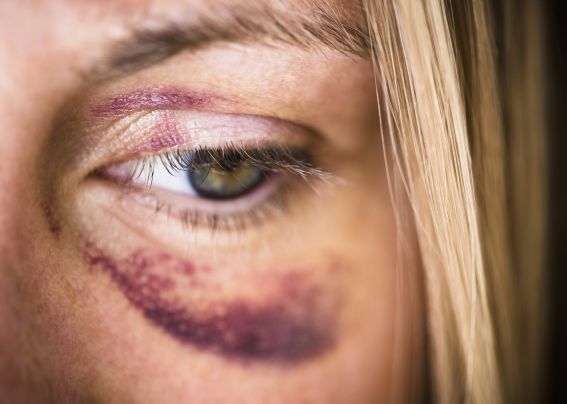 I realized that I would not have a normal childhood when I was four years old.

I realized that I would not be able to laugh freely with my family like all the other kids. I knew we did not share a strong bond of love in our family. I knew we would never gather around the dinner table and talk about how we had spent our day.

Instead, I spent most of my nights in fear and have had tears in my eyes since the age of 4.

I am a victim of domestic violence.

My father was an alcoholic and abused my mom from time to time because he was frustrated. I was in third grade when I first heard her screaming. He was pushing her around and breaking the things in the house. I was in the fifth grade when I witnessed my father punching my mother on her nose. I rushed to help her when I saw so much blood flowing out of her nose. I wanted to protect her. And from then on, he started beating me too.

He was the man who used to give me piggy back rides, read me scary stories, take me to my favourite places and cuddle me. But the very same man was choking me now with those very hands that used to feed me.

It’s hard to picture the man who was your own superhero as the villain of your life story isn’t it? From being bruised in every single place on my body, to having severe concussions and to suffering from hair loss – I went through it all. I suffered through all this for 14 years. I witnessed this for 6 years. And my mother and I were victims of his abuse for 8 years. Incidents like these happened several times and the bruises that my mom and I got increased with time.

The more the bruises on my body, the wider my fake smile would become. I wanted to show the world that I was still OK.

When this continued, I started getting nightmares every now and then. They were always about my dad. I would always visualize him hitting me or my mom. I would always wake up in the middle of the night sweating profusely. I would never be able to go back to sleep after that. I would just lie awake the whole night pondering about what I had done to deserve all this.

Because I was being physically abused, I had cut myself off from the people around me physically. I would flinch even if a close guy friend stood near me.

I became sensitive to criticism. I became very insecure to the point that I was scared of raising my hand in class. I was afraid to be myself around the people I loved. I was scared of even being with my best friends. I became socially anxious.

And because I was not getting the attention that I needed at home, I became an attention seeker in public. I would put on a facade just to get attention. I realized that this was not the best way to deal with my problem when I started losing my friends.

I had a brother who was six years younger than me. He would sit quietly in a corner through all these incidents. He knew that if he said anything against his dad, he would end up being beaten too.

And I am glad he decided to stay quiet during these times because I simply could not protect another person now.

But I knew that even though he was quiet, he was imbibing all these experiences. He may even have become numb after seeing all this. Maybe he could not even comprehend all that was going on in our house.

One day, I got tired of waiting for hope. I complained to the authorities.

I will never ever forget that day. It was the day I lost everything because I complained about what was going on at home in my school. Maybe I should have complained much earlier. But I belong to an Indian family and apparently, women here are taught to stay by their husbands' sides no matter what happened to them.

After I complained about my father, he was sent to jail but my mom, my brother and I had to shift to India. I lost everything overnight.

It has been almost 3 years since that incident happened but I have still not got over that day. I still remember the silent ride that I had when I left the school. I had walked out of the office with tears in my eyes. My classmates were staring at me and were looking at me with curious but shocked eyes. Some of them pitied me. Others had a look of disbelief on their faces. I knew they were wondering about what had happened to the girl that always smiled.

It has been three years now. I have dealt with depression, anxiety and guilt. I am still dealing with all this.

I feel depressed because I lost my childhood. I feel anxious because those nightmares still lurk as memories in my brain. And I feel guilty because my dad is OK now. He is completely sober but with no decent job because I complained about him.

He is not able to support us anymore. He cannot get back with us. And I feel guilty about separating him from my family.

I feel guilty about not giving him a second chance. It is funny that the world does not give you second chances.

When I reached India, I had expected a second chance. Not just for me but for all of us. My brother was living without a father. My mother was struggling without any support from her husband. She had not been fortunate enough to experience a normal married life.

And as for me – I think I lost the stability of my mind.

I don’t even know if I am a better person. I am an angry person who is frustrated now. I have so much bitterness in me. It has been three years since the day I made that complaint. Three years in which we were supposed to lead a normal life. But is three years enough to get over something that happened for 14 years?

Then why am I still not over it? Why do I feel like I am in the same hopeless pit? I still feel like I shouldn’t be complaining. Everything is almost normal again. The keyword being ‘ALMOST.’

We came here to escape from our past. But our past is not allowing us to escape.

I think to myself that maybe if I had just let that day go like any other day and stopped myself from complaining to the authorities, maybe we would all still be OK. Depression has seeped into my mind and is playing games with it.

Every time I see a friend embracing her father and comforting him, I can feel their love. And it stings me. It hurts me. Is this what I missed in the first 14 years of my life? Why do I still get dreams of my father beating my mom and me? Why are these dreams endless? Why do I still wake up in the middle of the night sweating with fear? Why can I still not sleep soundly and escape from those nightmares? Why am I not okay as yet? Why do I still feel like a failure?

Guilt is indeed a very heavy burden to bear at any age. Yet we often punish ourselves for other people’s mistakes. We may consciously refrain from hurting others but we should never allow others to abuse us in any way either. We all have the ability to create happiness in our lives. Let's share this touching story so that this brave young girl overcomes her challenges and learns to lead her life her way every day.