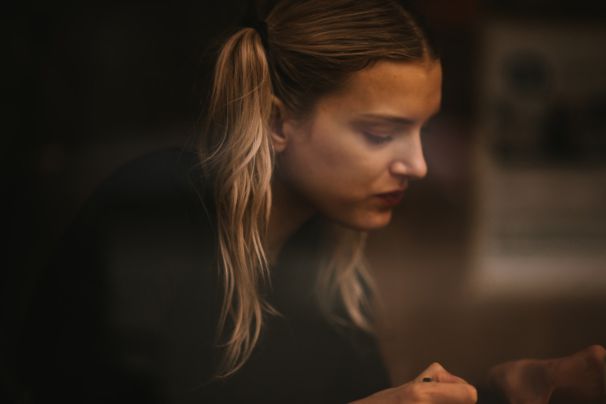 He was complaining about his wife now. How she never takes care of the kids properly and is always out with her girlfriends. She was constantly breathing down his neck to hit a gym and get six pack abs because her best friend’s husband has those and everybody is complementing it. "I work 70 hours a week, I don’t have time for that," he sighs. I widen my eyes and let them moisten a bit to show my sympathy.

“You’ve a great body for a 40 year old businessman. You know that. If I were with you I would never do any such thing and let you eat your favourite ice-cream every week.” I caressed his thigh and gave him the reassuring smile I practiced every morning.

I’ve been with men like these before, they are so vulnerable. They’re sweet but they can be tricky sometimes. We’ve been talking only for twenty minutes. It is important that he feels like we have all day to talk and that time doesn’t exist for us. But I know exactly how much time I have left with him. We have 40 minutes and I know it is plenty of time but I didn’t want to take any risks.

My job is all about minimizing risks.

I move closer to him and whisper into his ears, “I know what would make you feel better”. I tell him, "It would make me feel good too". I bend down to plant a kiss on his neck. He’s shy but he gets the signal and stops talking. Now it’s time he knows.

I was born and brought up in Mumbai. We weren’t financially well off. But we weren’t exactly poor either. We somehow made ends meet, easily. Out of all the kids in my society, I was one of the pretty ones with light brown eyes and a fairly slim body. I grew up to believe that any job is a job, that if I'm good looking and slim and not so educated, I can still be rich and happy. I was not a victim of child trafficking or child sexual abuse. I don’t have any ‘daddy issues’ either. I don’t blame my parents for my job or for the life that I chose. Whatever I did was for my pleasure and my people.

I enjoyed sex and one day I decided to just use my skills to make a lot of money and probably share it with the slums around my society, I had many friends there.

I know you're judging me right now but honestly, I see no harm in my job. As a teenager I was fascinated with sex – who isn’t at that age? More than the carnal desires, it’s the psychological factor that intrigued me. I didn’t have any pre-conceived notion about this field. Being in India, the media’s portrayal of sex trafficking and red light areas seemed too exaggerated for me back then. Although I’m obviously aware that those are serious issues, being naive and not letting media shape my opinions helped me in keeping an open mind to such work. And protection of course.

After moving to a new city for university, I had a lot of freedom from both family and friends. I had a lot of casual sex (obviously unpaid). This helped in some serious sex education. I discovered how I didn’t matter much to my partners and I felt obligated to let them not matter to me. And so the wall was built. That’s how I never got attached to any of my clients. Just to make a little money during college, I worked as a masseuse at a high-end massage parlour. Being the naive girl I was, I thought it was actually a massage parlour.

During my first massage, I assisted a girl. Half way through, she undressed. That’s when I understood why they paid her so much.

It felt weird at first, but the clients were all well-behaved men. It was during one such massage, I learnt about an escort agency. My regular client suggested I gave it a shot because I didn’t belong in the massage parlour. That’s when I started my work as a female escort. It was nothing like what they portrayed in the movies. Everybody was very professional. It actually felt like being in Bollywood, minus the fame and paparazzi. My clientele was mostly 40+ married businessmen. I’ve had a few celebrities as well. And just in case you’re curious, not all celebrities were good in bed.

As for my family, I’ll never tell them. They saw me grow up from a tiny potato with limbs into a fully matured lady. They’ve seen me dress up like a princess, twirl in my dress and tiara, I do the same now but just for a lot of bucks. I don’t want my family to go through the mental agony, if only I could tell them how respectful the men were. They’ll probably even cut off all ties with me if I told them. Because sex in itself is a taboo in my society, let alone sex work. My mom is a devout catholic. I’m completely non-religious, thanks to my dad. He has always encouraged me to question everything and be sceptical. That led to me being independent and is a major part of why sex work fascinates me.

They think I earn so much because I’m an assistant to a very famous therapist who treats rich people. They are innocent but I love the fact that I can help them financially with a job I absolutely love.

First one, if you want to make money, spend money.

I spent a chunk of my income on Make-up, clothes, shoes and everything that helps me in this field. Every time I met a client, I invested at least Rs. 10000 on myself (includes everything from the beauty parlour trips to the expensive lingerie). My dates gave me expensive gifts, perfumes, coats, iPhones etc. When a guy meets an escort, he wants to prove that he’s the best guy out there. He wants to be nice. But in real life, guys are stupid. Most of the women spend the same amount of time, energy and money getting ready for dates with potential life partners. But the guy takes her to a cheap diner or a sports bar to drink lots of beer. No wonder so many guys complain about not getting laid.

Lesson two, fit in a stereotype.

Clients know me as Priya, an exotic Indian woman who is fun, intelligent, playful and shy, passionate and never easily forgettable. Men here have certain conceptions. If you’re Asian, you’re freaky and wild in bed. Hailing from the land of Kamasutra, men expect a lot from Indian women. So to them, I was shy at first, and as time passed I blossomed into this naughty, wild woman. Men loved it.

Lesson three, working alone is the most profitable.

An agency screens your clients and sets up your appointments. They take care of you. But they also charge you for it. They take away 30-40% of what you earn. Massage parlours take away half of what you earn. Working alone is difficult at first. You really have to know the business at the back of your hand for that. I worked with an agency for the experience.

It was hard to quit. I needed a psychiatrist to help me out. He told me that the best way to quit was to think about doing this job for a long time in my future. My friends who were in the business with me never really quit. They kept going back. A friend got a job with an investment bank and earns around 75000 a month. We used to earn that much in a day. Once you get a whiff of the money, it is hard to let go. I keep going back every now and then. My shrink says it is okay to relapse.

I started dating. But it is weird because my clients used to be older than the guys I’m currently dating. I gave up most of the kinks. I’m just a normal girl now.

I wouldn’t advise girls to take up the job if they aren’t exactly curious. I was obviously very lucky in my profession. I miss the profession not because of the money, but because I could use that money to help my friends in the slums. I had a lot of money at my disposal so I just gave them some, that's all. I miss being well-kempt all the time. I miss dressing in nice clothes and going for manicures and pedicures twice a week. I do hang out with some of my old escort girlfriends sometimes, it makes me feel like I'm still a part of them.

My parents still have no clue about my past. The talk of marriage has come up a lot of times but I refused, I don't think any man will ever be able to make me feel so special as I felt as an escort to all those gentlemen. I’m moving out of India in a few months to pursue my doctorate in psychology.

I'll return to become a social worker. I learnt many ugly truths about child trafficking and young girls being forced into prostitution. I'll work as a therapist/counsellor to such children and women, I've made enough money by now to just put in my bank account.

I don’t regret what I’ve done with my body. I had some good times and some not-so-good times. I met my fair share of interesting people and also complete a***oles. It can help you get money, that’s for sure. But after that you’ve to find the world for yourself.