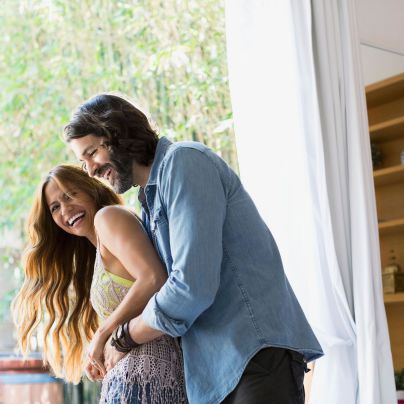 It was 2002 when my best friend in college insisted on bunking class so that she could meet her boyfriend, at his friend's place. I reluctantly agreed. We reached the destination and rang the doorbell.

A handsome and charming guy who had a million dollar smile on his face opened the door.

I was struck by his smile and friendly manners. He had a happy-go-lucky attitude. After few introductions and some group time, we were left alone in the room as my friend and her boyfriend wanted some personal time to themselves. They locked themselves in some other room, and it was just me and him.

We had lots of chats, laughter, and gradually formed a great friendship.

This became our daily routine, whenever I accompanied my best friend. And sometimes we would even meet over coffee to sort out the two lovebirds issues.

One day, I had a severe tiff with my best friend and we separated our ways. Along with this, my friendship with her boyfriend’s best friend also went down the drain. He was the charming guy who stole my heart with his smile alone.

I only had his email ID. We never shared our phone number; there was no way to get in touch with him. We finished our college and started working.

There were many things to look forward to. But one thing that refused to get off my mind was that charming smile.

So I decided to go hunting for him. Since I only had his email ID, I dropped him a mail. And every day I used to check my inbox for his reply. I tried to find on Facebook but couldn’t.

To my luck, he replied. He was in a distant country pursuing his work and studies. And after that one mail, he disappeared again. I was back to where I began from, no means to contact him.

I kept searching for him on Facebook, checking emails, but he was lost again.

It was in 2015 again, when I got an email and I reluctantly opened it expecting nothing new other than the regular promotional emails. And in the midst of those emails, I found his.

To my great joy, he was in the city right next to mine, just three hours away.

And from there, our friendship restarted.  We shared talks, laughter, and cried together. It was forming a bond which was going beyond friendship with each passing day.

Our day started and ended with each other. We shared our joys, sorrows, anger, frustration, food menu, and every other little thing under the sun. But like every paragraph has a comma and a full stop, our distance was the comma and the situations life had thrown to us in all these years, we did not want to end up with a full stop.

We never got a chance to meet in spite of being only three hours away from each other. Our friendship bloomed over endless phone calls, texting, and WhatsApp.

And then, there came a situation that took us further apart from each other. He moved to another city with a new job. He had different working hours and a completely different life. Calls and messages were reduced, and it was getting difficult to stay in touch. It felt as if I had lost him again, and I dreaded that this might be a full stop to our story.

But when 2016 came, we decided to meet at Hotel Grandview. He came all the way down only to meet me. I was struggling to park my two-wheeler when he walked towards me from the hotel gate.

And that was when we saw each other after 14 years.

All we could do was look at each other and smiled like idiots. After all, it wasn’t the full stop to our story. It had just begun all over again. I agreed to meet him in his hotel room, instead of the coffee shop.

I wanted to hug him tight and never let go of him. He was my best friend.

But there we were, sitting by facing each other and we again had distance between us. No hugs and no handshake, there was just a simple hi. That was the awkward moment when you have no clue how the other person is going to react.

Years had passed by, and we were re-introducing ourselves, our lives, and looking at each other from a different point of view. That’s when he said, “I didn’t want you to come here in the hotel, in case you were uncomfortable” and held my hands for the first time.

I looked into his eyes and replied, “Why should I be uncomfortable, it’s You!” and we hugged. It was the hug we have been longing for years and which led to our first kiss.

Yes, that was our first kiss ever. And it was mind-blowing beyond imagination.

I could feel his lips tenderly moving over mine and his tongue finding its way to meet mine. Our hands were fitted perfectly to each other.

Did the kiss lead to anything else? No. We talked, shared, and cherished our meeting. Are we lovers? No, we are just friends, or rather say best friends who stood the test of time and held onto each other. We are those friends who know each other inside out, accept each other with all faults, and who had the love for each other to platonic level.

Little did I know, what I thought was the beginning, was heading towards the end.

It's truly sad that people come into our life for a reason, and when their purpose is completed they leave. And after a few months, he left. Just like that. He didn’t even say goodbye or gave any reason. He just disappeared without ever showing me his face, leaving me hurt and confused.

It had been more than a year now, I never heard from him nor did I get the answers to my question. It feels like the purpose of my life is over. I pulled him out of the most difficult times of his life and stood by him when everyone left.

But what was his purpose in my life? Was it to hurt me and leave me alone?

And the question still remains unanswered... ‘Why did you leave?’

Share this story if you agree that life is unpredictable. It is full of surprises for us; some leave us happy and some make us sad. Either way, we survive and move on to get on with our life happily.