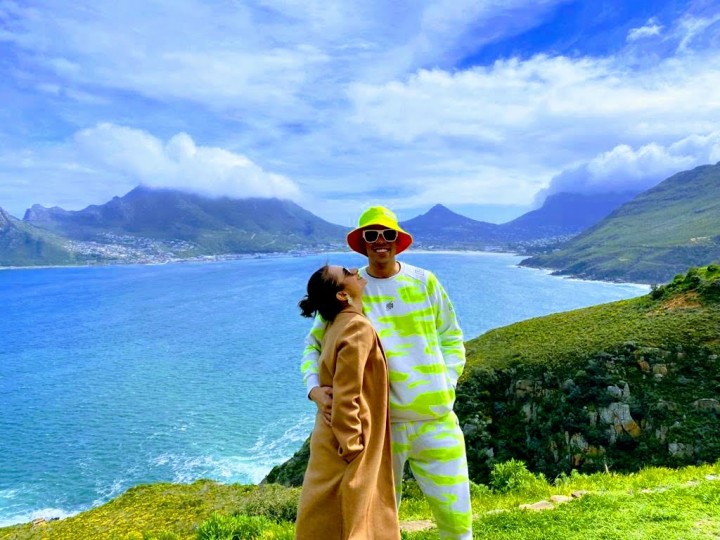 I met Hriya at a mutual friend's birthday party, and I went to university with her brother for three years, but I had no idea he had a sister because he was so protective of her. But she recognised me from Rishabh's social media and approached me, saying,

"Hey, I adore your salt and pepper hair." and I'm Rishabh's sister".

That's how we met; we were friends for six months, which I believe is the most crucial time when looking for love because it's during this time that we get to know someone and end up falling in love with your best friend, which is precisely what happened to us.

Six months later, I asked her out, and she happily accepted! Then we dated for two years until I proposed to her in an impulsive moment while sitting by a hotel pool in Goa at two a.m. with a bottle of Prosecco. Of course, she said yes! "Chhee!" she states later. This isn't the way to propose!"

I felt compelled to defeat everyone on the earth to earn her hand because she deserved it and was deserving of it.

I then had a tuxedo printed wet suit created and a small shell in which I placed a ring and proposed to her while scuba diving. She plunged in first, and I quickly changed into my wet suit and dived in about 40-50 feet, kneeling and proposing to her, and we haven't looked back since.

We have had the most amazingly beautiful 3 years of marriage since then. We have fights, but one good thing we have is that it's not just about shutting up and fighting a lot of months later when everything that's been put down comes out - it's like we're fighting once every few days and then end up lovingly with one of us bursting out laughing (which is usually me) then the other starts clapping and being like "idiot!" And then just hugging and kissing. I always give her a hug and a kiss after we argue or she gets angry; whether we just had a fight or a quarrel, it's something I do and will continue to do till the end of time.

And I think that’s what I’ll tell the people who are hell-bent on using the shortcut way of finding love on apps and sites – I think the most effective way to reach your romantic goals is to get to know someone. I'm not saying that I'm against dating apps because I'm sure many people have met their partners on dating apps and are happily married, but I'm just saying that somewhere there's a thrill in getting to know someone first and then moving on to the next step is extremely valuable to me, and those are the moments that I cherish for life.

Taking your time, I believe true love happens only once, maybe twice, and never more than once.

Of course, you love your children and grandchildren, but you're lucky to find it once with a partner. It takes time you've to build and evolve yourself.

I've changed a lot because of her, and I hope she has as well; she's made me more patient and calm, which has helped me deal with problems much better, and I think I've just made her a little more adventurous, which has made her take risks; we're both scuba divers, and one thing we keep doing to each other is inspiring each other to work harder and be better versions of ourselves every day.

The reason I mentioned we're scuba divers is that we both adore sharks, and most shark species can't survive in water if they stay still; they need to move to keep the water flowing through their gills, which is exactly what we do;

We continuously push each other to be the better versions of ourselves.