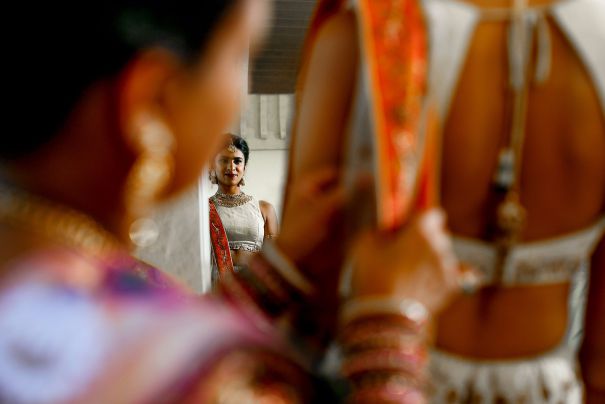 I wasn't ready for marriage. I was one of those career oriented girls who was hard working hard and was earning as well as saving up. And THEN came marriage on my priority list. But my parents thought otherwise.

I was in the third year of my engineering when my parents started looking for suitable grooms for me.

Most of my relatives supported them saying, "If you don't find a suitable guy now, you will have to settle for whatever idiot or incompetent fellow that arrives when it's too late". Yeah they said that. There were also some really great people that said "What?! She's just 21 years old! Why can't you wait?! She hasn't seen the world yet!"

But no parent listens to people like them do they? Many matches came. I never saw them or they never saw me either. Directly at least. Photographs and details were exchanged. But every "candidate" found some quality or the other that they didn't find pleasing enough to meet us.

Some said I looked fat. Some rejected me because I had spectacles. Some even said I was too short for their requirement.

I got vexed at a point and started looking out myself too. One rishta came where the family seemed nice. But the guy was a total dud and was clearly trying to impress me in a creepy way, which really put me off. He was sweet and nice but I could tell that we didn't connect well and things won't work out. My parents, on the other hand, felt otherwise, which caused a great world war situation. When I tried explaining that our mindsets didn't match, my mother tried telling me that I had to adjust and that such a wealthy and generous family won't come into my fate again. Which really had me lose hope on the concept of everything related to emotions and bonding.

My dear mother even threatened to kill herself, and emotionally blackmailed and tortured me with every possible knack out there to make me feel guiltier about myself. But I didn't give up.

There were days where I felt that if my own family won't support me in such a decision then why should I live? I worked hard for my degree. I'm almost done with my bachelor's in engineering and I got a job in two reputed companies that were waiting to offer me the best package. But no.

They were in a hurry to get me married. Fortunately when the horoscopes didn't match, things got better. But it didn't stop. I finally decided to go with the flow.

After all, I saw so many rishtas passing by before they even saw me. So I thought I shouldn't worry until it reaches the final stage. This was my first time meeting a family at my place in the traditional manner where the guy comes with his family and the girl waits inside to be called out, and once she comes, everyone has a good look and talks to her and if the parents are broad minded enough, then they let the guy and girl talk.

I was worried and nervous to the point that I got sick at night. I wasn't feeling good at all. My eyes burned and my hands shivered as I sat patiently in my room as I heard laughter and voices in the living room separated from my room by just a wall. As I got up to go into the living room, I felt light headed and had a bad feeling that I would either puke or faint before they even had a look. I looked at my mother's face which was full of concern as she knew I was sick. That moment I realised that she wanted the best for me. Maybe that's why she was working so hard to find the right man for me. So why not give it one last try for her?

I held my breath and walked out. I greeted aunty and uncle as they were the first people my sense of sight noticed. Then my gaze fell upon him. Rudra. I don't know what it was but that one glance and smile just made all my worries and pain disappear.

Just like they show in the movies during those "love at first sight" moments. I could tell that he liked me too from the way he blushed when our hands touched as I served him the snacks. We eventually got the opportunity to talk and liked each other more. We added each other on Facebook, exchanged our phone numbers and spoke endlessly for a week, turned out he felt the same when he looked at me for the first time. We met up at a restaurant where we spoke about our interests, our past, and what it would be like if I married him (all the pressure that is involved and complications that might arise as he lives in a country where a completely different language is spoken).

I was brought up in the USA, which made all those complications seem kind of less in size compared to everything I've seen and faced and told him the same. He finally took a deep breath and looked me in the eye as he asked me to think again. I didn't know why but it didn't take me even a second to say 'I'm okay' with everything. Little did I know that he'd smile and take me by the hand and propose me filmy style in the middle of the restaurant saying that he's in love with me and would like to marry me as soon as possible. I blushed and said yes.

Our parents were overjoyed to hear the news and we got engaged immediately. From then until now, we have been inseparable.

Though we are thousands of miles apart, this long distance relationship made us learn a lot and made our bond grow stronger. We explored our interests, talked, called and texted endlessly and even had a few arguments but he has been the most amazing support system in my life. And most importantly, he's a great man. I'm extremely blessed and grateful to have him in my life. He feels the same, and has never left my hand since.

We are getting married in the month of July and cannot wait to finally be together and start a beautiful life. As they say, "there's always a ray of sunshine waiting to come even after the harshest thunderstorm. And maybe a rainbow too." Well, I found my sunshine and I'm about to see the rainbow.

Sometimes, it's just meant to be. How love happens doesn't matter, what matters is that it happened. Share this story because there's no reason to ever give up on finding a partner for life.