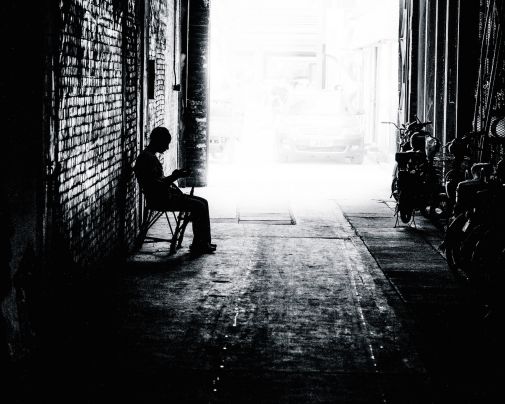 It was pouring as if the Rain God had suddenly decided to favor us with his bounty and then forgotten to turn the tap off.

I was on my way to work and was stuck in the bus for hours. I was ready to kick my own ass for being so stubborn for heading to venture out in the downpour. Half of the office and most people at the client’s end would not make it to work. Telephone lines would be a mess and so would the Internet. Why was I even attempting to reach someplace, which would have nothing of any meaning to offer me today, then?

I had half a mind to go back home except the fact that the process would be equally slow and besides, it meant leaving the already comfortably occupied seat and getting out of the bus and crossing the road (which now had ankle length rivulets snaking everywhere).

I was still choosing between the white angel who asked me to be a good girl and continue to work and do my bit today and the dark devil who kept telling me how nice and snug it would be to be back home with a warm coffee cup and watching the rain fall from my window.

However, my reverie was broken by this sight; Today, when most street vendors, (who would have very little shelter from the rains) had decided to stay indoors, there was this frail oldish man who was selling ropes and other household knickknacks on the sidewalk. He had an old tattered umbrella that had managed to only keep his head dry. His wares too were wet but still sale-able.

When I saw him I was shocked at his persistence and at the same time, I felt guilty. If he could be brave enough to come out in the rain to sell on the street, I had no right to complain when I was on my way to a workplace which, now, seemed luxurious in comparison to his.

He may have various reasons to be out on a day like this or maybe he really needed today’s wages so badly that he was ready to fall ill for them. Whatever it was, I was moved. It needed a lot of will power to brave the rains no matter what the reason. I went to work and did my bit that day. When I was returning in the evening he was still there. I think he had sold some stuff by then but he still looked cold and content.

I witnessed this about eight years ago but I still cannot get the man’s face out of my mind. Every-time I am ready to give up on something, I think of him and pray to God to give me his resolve and strength.

May he be blessed wherever he is.

Share this story because someone will get inspired reading this, I promise.