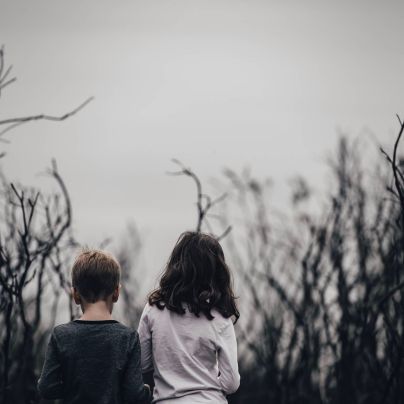 I deserve an award for being the worst sister ever. This is why: I was born to a set of parents who were happy, well-educated and rich. My childhood was pretty good and normal. God blessed me with a baby brother who's 2.2 years younger than me. We used to share an amazing bond when we were younger.

Eventually I started to boss around with him, unintentionally. My parents noticed it, but never did they once sit me down and explained that it was all wrong on my part. My dad had some financial issues plus his dad and elder brother were drunkards, hence, the entire family burden (joint family of 10) was on him and so he was always running around, he'd come home late, after we all fell asleep. So there was hardly any bond/interaction with him in those days. But he was always a good father and still is. And my mom was more concerned about when our holidays would start so that she could run away to her parents' place with us for a whole month or two.

Never were we (my brother and I) asked if we were interested/comfortable in going over to her maika for each and every possible holiday. Still, she was a good mother and still is.

They were typical parents who tried their best to give us a comfortable lifestyle even if it meant sacrificing a few of their needs. But they were also typical parents who would have terrible mood swings and get aggressive. Dad never raised his hand on me/brother/mom. But mom beat the pulp out out of my brother and me. We were constantly shivering in her presence.

We'd sometimes hide under the bed listening to the sound of her mangalsutra. I grew up to be a rebel whereas my brother grew up to be quiet and timid. That nature of his made it easier for me to dominate him as well as protect him from my mom's anger sometimes.

That phase continued till I was in my terrible teenage stage. As soon as I finished my 12th grade, I decided to go out of home to pursue my studies. I hadn't even decided where, I just wanted to leave home. My mom had sought the advice of some astrologer & he thought it was a bad idea. My parents tried every possible way to convince me to stay back at home, but I was a rebel, how could I trade my freedom for anything on Earth? So I went anyway.

There I met my Mr. Wrong. It was a whole big fat mess and my parents got to know about him and there were lots of fights happening, loads of drama oozing out from every family member of mine. At that stage it so happened that I was so busy fighting for Mr. Wrong, that I had left behind my brother to deal with all this alone.

It didn't cross my mind that he was still at home bearing the agony and drama of our family. I should have taken the clue when once or twice he had messaged me on Facebook asking me to stop giving tension to my parents. I didn't pay heed. I didn't care what he thought. He was younger than me after. He should listen to me, not the other way around! Slowly but painfully, I realized my mistakes one by one.

It took a big hit on my ego, confidence and it completely strained my relationship with my family. But parents are parents, they accepted me back, though my mom does make sure to make a few inappropriate comments about my past every now and then. BUT I had lost my brother. He is very much alive. And is very much distant, aloof, an introvert at home, complete extrovert outside home and a computer addict.

My parents haven't lost their son. He is very close to my mom. But they have NEVER EVER tried to repair my relationship with my brother, even though I have pleaded them several times.

I vowed to myself that I shall always love my brother, no matter what, I shall be there for him always. But he doesn't budge. To top it off, my mom uses and instigates my brother against me if I try to argue or reason with her for anything. It was one lonely afternoon, I was crying my heart out in the kitchen, as that is where no one could hear me. He comes, takes a water bottle and leaves.

My heart just broke that day. I mean I wouldn't, couldn't ignore him like that ever. He's my baby brother. I have apologized to him so many times, begging for his forgiveness, promising I would never make such mistakes ever in my life. He doesn't even react. He hates me now. He hates me for my past and for what I put our parents through.

He doesn't realize that I am a changed person now. If only he would give me another chance. I am fighting depression and anxiety. All by myself. No one has a clue. I'm dying inside. Before I kill myself completely with all that I'm feeling, I just want him to understand that I'm truly sorry that I failed as a sister.

Share this story because every human being deserves a second chance and very few people take the route of acceptance.