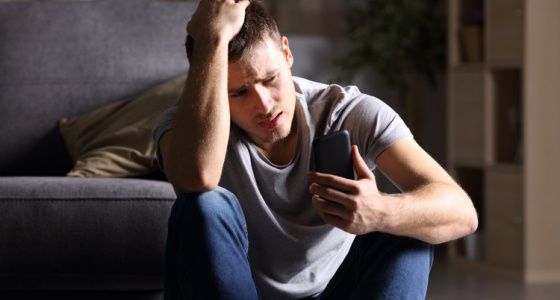 This is the story of my first love and, quite possibly, my last. It was 2012 and I was a 17-year-old boy shouldering the responsibility of my family of four alone. I was working as a salesman in a ready-made garments store and I was the sole breadwinner of my family. But I was young and desperate for a girlfriend, especially after seeing my best friend with his girlfriend. So, I asked him to set me up with someone and he discussed this with his girlfriend. She then spoke to her best friend and told her all about me.

One night I got a message from this girl which read, “Hi, (her name) this side.” I knew who she was but I hadn’t seen her yet. I started chatting with her. This was the age before WhatsApp and so we couldn’t send pictures through text. I didn’t know what she looked like and it was three days of chatting before we finally met in person.

She was studying at that time and her father was a successful businessman and her brother worked in a bank. She was from a well-off family. When we met, I informed her clearly of my financial and familial situation, not wanting to lead her astray with false information. She was fine with my situation and so we continued to meet up more often and we realized that we were getting closer to each other. She had fallen in love with me, but I had not, although we were really close and had started dating. But after a year and a half, I confessed to her that I loved her as well. During this course of time, we had broken up several times and got back together.

We were still young and immature but we fought through it together.

She was my lucky charm. I achieved many things after she came into my life. Starting out as a salesman, I then worked in multiple MNCs like RBS and Convergys before starting my own business in 2015. She stood by me through it all. Everything was good and we were happy. I’d already told my mother everything about her and introduced her to my family, fully believing that she was already a part of it.

But after a while, she started ignoring me.

After many futile attempts at contacting her, she finally responded and said that her brother advised her saying that if she was going to chose a guy for herself she should find someone who is well settled and educated. She said that that sentence struck her and made her think. On October 17, 2015, she told me that she didn’t think I would be able to settle down within the next two years and so she thought it was best to break up. I tried to convince her a lot, but she didn’t change her mind. I was sad and depressed and I tried to move on, but it was very difficult.

We were both born on the same day- November 1st, 1995. On our birthday, I got a message from her at 12 in the morning wishing me a happy birthday. I replied and we started chatting. She said she was sorry for everything that had happened and that she wanted to get back together, but I was not willing to accept it. I had trusted her blindly and she broke me from within. She tried a lot to convince me, but I would not budge.

I moved on and got busy with my life. We used to keep in touch, but we were not a couple anymore. I started having other problems in my life as my business failed and I became unemployed for almost three months. But gradually things started falling back in place as I got employed soon. She got a job as a teacher. We continued to keep in touch and everything was going smoothly. Finally, on January 21, 2017, after giving it a lot of thought, I decided to give our relationship another chance. We were both mature adult now and I was sure we would be able to work it out. I spoke to her about it and she agreed. We were happy again.

But that happiness was not meant to last forever.

A week later, on January 29, she told me that she was getting married. I can’t even begin to try to explain my situation. It took a lot of effort for me to get to the point where I could think about being in a relationship again. We were even discussing on writing a novel based on our story. I had so many dreams and plans, and then she dropped that message on me like a bombshell.

My entire world turned upside down. I messaged her and begged her to clarify the situation and tell me what was going on. Despite me reaching out to her so many times, she didn’t respond. She blocked me on all social platforms and ignored all my emails. She told me that her marriage was fixed for November 2017. Months later, today, it is May 2018. She is not even engaged yet. I don’t know why she forced her way back into my life, as I was trying to move on, only to vanish again. And now, I am so broken that I cannot be fixed; I cannot move on without knowing her reasons for her actions. For the four years of my life that I dedicated to her, she couldn’t even give me four minutes to make my stand to her family. I was left alone, again.

Nobody ever prepares you for the pain of being avoided by someone you love, despite it being experienced by nearly every single individual at some point in life. Share this story because we need to open up more about the pain being inflicted by such acts, so that people would understand the impact of their every action.