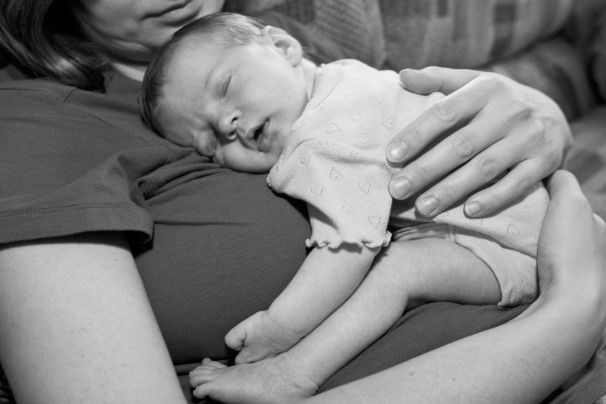 It seems like just yesterday that we brought him home and placed him in the arms of his grandma. Now, three months later, I was getting dressed so that I could rejoin my office.

With every passing second, I regretted my decision of leaving my baby. I wanted to look after him. I wanted to take care of him. He was God’s gift to me.

The circumstances were such that I was forced to leave him at home in order to earn a living. I mustered up some courage quickly and emerged from my bedroom. I walked over to my son’s grandma who was waiting there to see me off. I watched her holding my son in her arms. I kissed his tiny forehead, said goodbye and walked to the main door.

My eyes filled with tears as I left him.

I reached the office and sat there in my cubicle. I waited for the rest of the staff to come to the office but my heart felt so very heavy. All I could think of was my son. Every time I looked at the wallpaper on my mobile phone, tears filled my eyes.

I wondered if I was heartless because I had left my 3-month-old infant at home. I couldn’t help but think of him and tear up.

I saw my boss entering the office and freshened up. I had just started on my work when he called me into his cabin. He congratulated me on becoming a mother. He then began questioning me and wanted to know why I had taken my entire leave of 3 months. I was shocked and astounded. I wondered if I was hearing him correctly.

I told him that he himself had sanctioned my maternity leave of 3 months. I even had proof of it in writing. He continued with his argument and said that I should have reported for work after a month and a half of my delivery. I just stood there staring into his face. I wondered how this man could be so heartless. I thought he was worse than a tyrant. He was asking me why I couldn’t leave my one-and-half-month-old helpless baby alone at home and work in his office.

Here I was struggling to leave my three-month-old baby boy at home with his grandma and this pathetic man was asking me why I couldn’t report for work after one and a half months! I was shocked and hurt.

I thought to myself as I walked out of his cabin. I knew I had to make a decision that day. I needed to get my priorities right. I had to decide which was more important to me; my job of eight years or my helpless son.

My heart said I should choose my little boy but my responsibilities said that this job was more important.

I left after the day was over and returned home. I walked through the door swiftly and rushed to my bedroom. My husband came out hurriedly when he saw me. He sensed that something was wrong. My facial expressions said it all. I burst into uncontrollable tears as I sat on my bed. I did not have the strength to fight my heart anymore.

My heart won that day. I chose to be with my son.

Nothing else felt more right to me that day. I decided to give up that job and stay at home so that I could raise my boy myself.

Dear son, I am glad I chose you.

Share this young mother’s story because it will surely help other mothers who are struggling with issues. Sadly, whether a mother chooses to stay at home or continue working, she somehow always ends up feeling guilty. There can never ever be a right or a wrong decision here. Let us hope that they all master the art of being at peace with whatever decision they finally take.