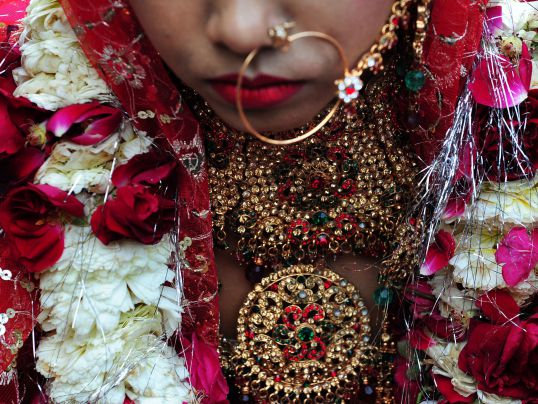 My marriage was arranged. In the most literal way possible: I wasn’t given even a day to decide if I wanted to marry him or not. Within a couple of hours of his family coming to our house, our parents decided that they hadn’t seen a perfect couple.

I denied; obviously. But no one cared about my opinion, of course.
On the very same day that we met, that evening, we were engaged at my Masi’s house.

Again, I tried to stop this from happening, but not a soul cared enough to listen to me and my thoughts. Because who was I to say anything right now? All I’m defined by is my B.Tech degree, which just makes me an independent, self-fulfilled woman- and why should anyone listen to me?

Our wedding date was decided soon after, 3 months. I had three months to figure out a way to get to know this man and his family. I tried- We spoke on the phone, exchanged messages but nothing could help me change my mind. Unfortunately, at that time, there was nothing that I could find to convince my family that he was a bad choice either. Very soon, the D-Day arrived. I was nervous and a mess: all I knew is that he was possessive and narrow-minded, two traits that didn’t seem to bother my family enough.

That night, as we sat on the same bed, he came close and whispered in my ear, “I’m just not interested in women; never was and never will be.”

With that, he shut the lights and went off to sleep. I was shocked, so much so, that I couldn’t utter a single word. Neither to him nor to his family who began finding flaws in almost every inch of my body and my personality from the very next day.

A week later, my husband told me that we were moving, he had found a place closer to work. I thought this would be a good change. But every single time I tried to talk to him, to support him, he would end our conversations with one fiery argument and silence me. He never showed any interest in talking to me and told me to sleep on the floor.

One day, I asked him to bring a bed or an extra mattress for me, he gave me a blank look and told me that he wasn’t here to provide for me and if I wanted these things, I should pay for it on my own.

I thought I should find a good, steady job. Something that not only would help me pay for these necessities, but also take me out of the house and give me a change of environment.

When he found out about this, he was not supportive, but he didn’t say a word against it either. Things just went on for a long time like this.

One afternoon, I told him that I wanted to go back to meet my parents because I missed them so much. He agreed but told me to ask them to pay for it. Finally, I booked the ticket on my own. After this, we went to the market, where possibly unintentionally, he pushed me in front of an oncoming bike. I met with an accident and I had no feeling in my right leg. Instead of taking me to the doctor, he took me home, despite me begging him to take me to a doctor.

The next morning, he woke up with a huge smile on his face and told me that today was the day I was going home. He dropped me to the airport, not a shadow of concern on his face, and that was the last time I saw his face.

Before my flight could land, he had called my parents and told them that I was “characterless” and that I wasn’t fit to be anyone’s wife. Today, I’m staying with my parents, but they think I’m the black sheep of the family and have even confined me to my room.

They’re from a good family, you see, so they can’t afford to let society find out that their daughter was asked to come home, by her supposedly gay husband.

Share this story because this would be a great time to make society stop victimizing women for its flaws.