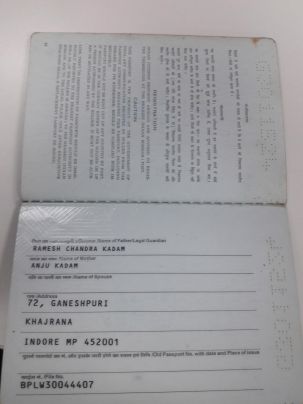 We all grow up imagining to find the perfect partner for us. For this very purpose, I and my family chose Shaadi.com as a medium.

I am 26 years old and I work for an IT company. I am attractive according to the societal standards (the reason I had to mention this is because beauty is one of the most important criteria a girl must fulfill in order to find a groom), I stand tall at 5 feet 6 inches, kind of average height for an Indian woman. But I am born with a medical condition, and as a result, I can't have biological children.

Since I am of the marriage age, the hunt for the "right" person had begun. We always wanted to be honest with the potential partner about my medical condition, which is quite justified. So during the 2nd Interaction, I used to break the news (I didn't want my parents to speak about it as I was the one getting married).

This process was very time consuming and mentally exhausting, until I met this one person. Let’s call him "Ved". Ved was also working with an IT company and took this news about my condition quite positively.

I never wanted pity from anyone for what I have, as it doesn't change the quality of life for me.

I have always been a healthy person and wanted others to identify me that way. Ved seemed genuine and fit the criteria; so we started meeting up on the weekends as both our workplaces were in Bangalore. He started introducing me to his friends, which, in my mind, validated our relationship (though it looked too perfect to be true after all the numerous rejections I had).

The initial 3 weeks were perfect. But one day, he asked me, if he could kiss me and I said yes, considering that we would get married in a few months time. Our parents met each other and Ved asked me not to share this info about my health with his family as they may not understand but I was happy that my would-be life partner knew about it.

But little did I know that he had completely different plans on his mind. After a month of courtship, he introduced me to his friend, called Ankita. Her body language told me that she was extremely uncomfortable around me, I spoke to Ved about it and he brushed this topic off.

One night, I couldn't go back to my place as it was raining heavily; hence decided to stay over at Ved’s. That day, things progressed from just a kiss to the something more.

When I resisted, he said that it was okay as we were getting married. So, I eventually went with the flow.

After that night, I sensed a sudden shift in his attitude. He stopped answering my calls as days passed. Earlier, we use to talk for hours, which turned into a 5-minute conversation once in a day. It was a very unsettling feeling, and when I asked him if there was something that’s bothering him, he rebuffed it by calling me stupid. Two weeks passed by and it didn't help me.

To lighten things up and spend some more time with him, I booked the tickets to a Hindi movie and went to his place directly. I thought it would be a pleasant surprise for him but I didn’t know that I was the one who was in for a surprise. As I knocked, Ankita opened the door and was baffled to see me. She smiled awkwardly, giving in a lot more information than I was looking for. However, Ved said that she was just passing by so thought of coming over. I took it easy but my gut feeling was telling me otherwise.

We then left for the movie, and on the way back home, his phone was with me. He got a message from Ankita that read, "had she left yet, if yes, then let's go for a drive". I still remember those words vividly. On seeing this message, I confronted Ved asking him to tell me if something was going on. He then accused me of misunderstanding two friends and also gave me an explanation that Ankita wanted to learn driving and hence the text. The excuse felt too lame. But I, like a love-struck puppy, bought his explanation.

During one of the weekdays, I fell sick and wanted some company, so I went to his place. On seeing me, he was literally furious. He kept on saying he had so much work and that I couldn't go like that unannounced. That was the first time we had a really bad fight yet I didn't lose my ground.

There I was, feeling low, and in need of a person whom I loved and thought loved to be around me, but instead faced resistance.

It was a bad feeling, but despite all this, Ved didn't skip the chance of having sex (it never felt like he was making love to me) with me. Post this, we both went to sleep. But at 12:30, his phone started ringing and it was Ankita. After the call, he told me that she was feeling lonely and that she needed him.

I was confused about this whole situation. Ved's indifference, his cold behaviour towards me during the past three weeks, and my gut feeling about everything – it all became too overwhelming. That immediate weekend, I decided that the three of us needed to talk. When I reached his place, she was there and on her neck, was a hickey, evident even to a visually impaired person. That didn't go well down my throat. But I let it be.

That day, we went to UB city to have lunch. On the way, Ankita initiated the conversation by asking me why I don't like her! I was surprised but I replied that I didn't want to be an outsider in case there is something going on between Ved and her and that they could be honest with me. I further asked her about the message that she had sent him and why she couldn't ask me to come along if she needed to drive. I also asked about the late night calls and the love bite she was flaunting so openly. I got the shock of my life when Ved verbally abused me as a reply to my questions. He said that he never wanted to get married to someone who can't have babies. I couldn't believe he actually said this to me. Even though I was being honest with him, he was not. He conned me.

With my self-respect intact, I asked him to stop the car and got down. I curled up and cried to myself. I was too embarrassed to tell my parents what went wrong but I mustered up enough courage to tell them so.

After 3 months, he called me up around Diwali, and I am glad I answered the call that day. I asked him if he was sleeping with Ankita, and that I deserved to know the truth. He replied in affirmative. All along, he was fooling me and did it with ease.

I am still happy that I got down from the car that day and didn't let him scar my soul any further.

I got to know about my medical condition when I was 15 and have lived with it ever since. I love kids and not being able to have one created a void that nothing could ever fill. But this as the harsh truth and I have learnt to accept it. I don't give anyone the right to put me down or subjugate me.

We all are unique and must be accepted that way, even with the flaws. Even after Ved, I didn't stop hoping and eventually, crossed paths with my husband. Yes, I got married 6 months ago and my husband accepted me the way I am, without wanting to change anything.

I am positive that someday if I’d have a child I would make an amazing mum.

But more than anything, I am happy that this medical disorder acted like a litmus test and paved a way for me to find my life partner.

Share this story because even though happy endings are real, the struggle shouldn't be.