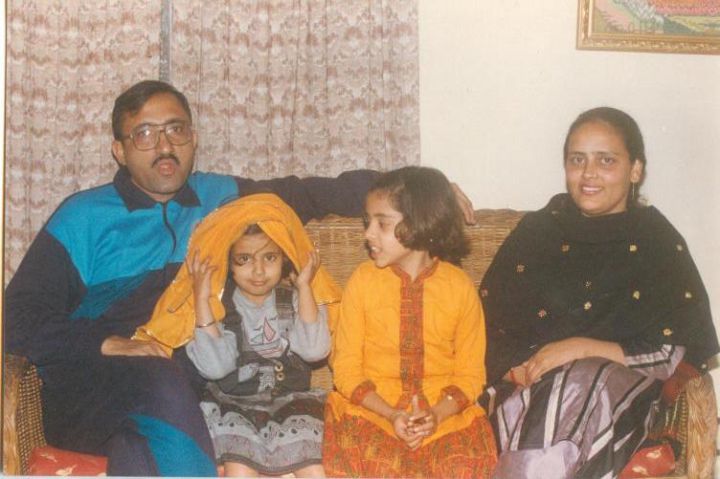 It was a normal morning in a train the next day. Except for when a co-passenger who had just learned where our father was, was introducing her daughter to us, saying, “apko pata hai, inke papa border par hain?”.. and the girl, who was actually older than us, looked at us with an expression of wonder.

I would be lying if I said, I hadn’t grown to take that look from people with a lot of pride since the war had started. People would suddenly start looking at us as if we were celebrities or related to one, the minute they would learn our father was fighting the war. Well, he was a real life hero, for sure.

So, some where between, being celebrity- like, pretending to read the morning paper and getting scolded by mummy for arguing, we reached Delhi and were surprised to see more people than we were expecting, come to receive us at the station.

After a bit of a discussion between mummy and her brother, about whether to go to his place or get dropped at the bus station to catch a bus to Meerut, which is where we stayed, our uncle won and all of us were taken to his place. Here again, there were more people than what we were expecting to see. But well, this was Delhi, it was always full of people and that was that.

To our delight one of the uncles, offered to take us kids for an ice cream treat to the nearby Khan market, soon after we’d reached.

Here is when another incident that I categorically remember, happened. Just after the ice cream, he had to make a pit stop at someone’s place. So he did that and went in before us, and called us in later. When we went and sat inside, the adults were talking about how daddy’s regiment was supposed to move out of Srinagar just now, and the war broke out. They would look at us, with these expressions that I had great difficulty in deciphering. Was it awe(which I was used to), or sympathy(which I wasn't till then)? This time it seemed to be more of the latter. I would be lying if I said that that didn't confuse me.

Anyway, summer treat over, we got back and ran straight to the TV room. I passed my cousin(sister) on the way, standing outside the washroom while my mother was washing her face inside. It seemed as if she was waiting on her. I looked at her and raised my brows to ask, "what"? She gave a faint smile and shook her head, as if to say, "nothing".

But, it wasn't nothing. However, while we sat watching TV I could sense that something was wrong. With so many people in the house right now, there seemed to be a haunting silence outside of the TV room and I couldn’t see anyone around. Why were they all huddled in one room? It made me a little uncomfortable.

I decided to go and check. While walking I thought to myself, “it’s such a good day, so many of us are here together, we had such great ice cream, I feel so good right now. I hope it isn’t anything bad. Because, nothing can make me feel bad right now”. Strange right? In my mind, at the most, this could have been about some argument breaking out between the adults and them trying to sort it and getting emotional in the process. My heart was racing.

I definitely wasn’t prepared for what came next…