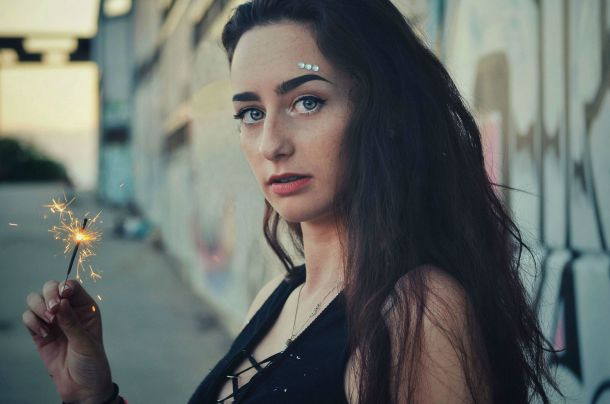 I had a huge crush on my boss from day one. My team members too knew about my crush. They would often tease me by associating me with him. I did not mind their teasing me. In fact, I even enjoyed it. My boss had no idea about the crush that I had on him. To him, I was just a good employee.

After a while, I got a good opportunity to work with another team. On my last day with him, I went to meet him. He said, "Keep in touch. Remember that we are friends." That night, I sent him a friend request on Facebook. I then realized that he was my distant relative. We started chatting over WhatsApp and quickly progressed to calling each other.

I then made the first move and said, “I have a huge crush on you.” He said, “Kiddo, I owe you a date for this.”

So one fine day we decided to meet for a date. We roamed around our city for a while and then ended up having a few drinks. I was living by myself at this time so it was possible for me to go out at any time with him. He too could come to my place at any time.

We then started going out quite often. One fine day after we had spent the day together he asked me if we could have tea somewhere. I asked him to come to my place.

Maybe that was my biggest mistake.

He had his tea and then started smoking. I don't know what came over both of us but after a while, we realized that we had become very intimate with each other.

I knew he was dating someone. But I couldn’t control myself. I just let him do whatever he wanted to do. Deep within my heart, I knew that I too wanted the same thing. We spent a lot of time together after this. We would meet every other day and make love.

A few days before Valentine’s Day, I told him that I was in love with him. He said, “I am about to get married. It is too late now.” I was shattered when he said this. But I thought I could still spend some time with him because his marriage had only been fixed. We slept together even on the day I shared my feelings with him. He would put me on a high with his lovemaking.

I somehow felt he really loved me and wanted to be with me. I would always feel so happy when I was with him.

Then on Valentine's Day, I saw his picture with his fiancée. I felt like killing myself. I hurt myself with a blade and cried continuously. I didn't eat for 4 days. He hadn't met me for 3 days. And on the 4th day, I hurt myself again with a blade. One of my friends knew all that was going on in my life. She couldn't control herself when she saw me in that condition. So she told him everything.

He came to my place again and took me out.  He made me understand that there were times when we had to do the things our parents wanted us to do. I knew he was right in what he was saying.

He had already been married before. It had been a love marriage. His marriage had not worked out so they had ended it. And now after 2 years, he was going in for an arranged marriage.

I was in tears when he told me all this. I somehow managed to control my emotions and asked him to drop me home and leave.

He dropped me home and left. I ran to my bed and started crying again. Suddenly I heard the doorbell. I was surprised to see him standing there. He had seen me crying and said he couldn’t leave me in this condition. So we ended up sleeping together again.

The tragedy of it all is that he got engaged to his fiancée the very next day.

I got to know about it from Facebook. I could do nothing about it. The only solution that I had in front of me was to cry my heart out for him. I did my best to stop thinking about him but I just couldn’t forget him. We then planned a trip to Agra.

We spent a lot of time with each other and had sex every day. I knew that he too loved me and wanted to marry me. But he couldn’t do so because of his family.

He loves me but he is going ahead with his marriage too. He said he now has to take care of two lives – his wife and me. I know I will always be his girlfriend – and never his wife. We slept together and made love at his place just a day before he got married. He has promised to go out with me again by the end of the month. I know I should stop making out with him but I cannot control myself. I know he is cheating on his wife and technically that is wrong. But he visited me even on the day of his marriage. So I know that he is not happy with his wife.

I also know that we both love each other but we can’t stay together and despite all the love that I have for him I have no one to share my pain with.

I don’t know what my future has in store for me. Will I ever be able to get married to anyone else? How will my story end? Will it have an ending?

Do share this story because often we love another person so completely that we lose our identity and sense of balance in the process. But at some point in our lives, we also realize that we need to love ourselves first. Then slowly the reality sinks in. We can never ever derive happiness from other people. Happiness and peace always come from within. So now we march ahead with determination, revamp our lives and learn to live it our way.