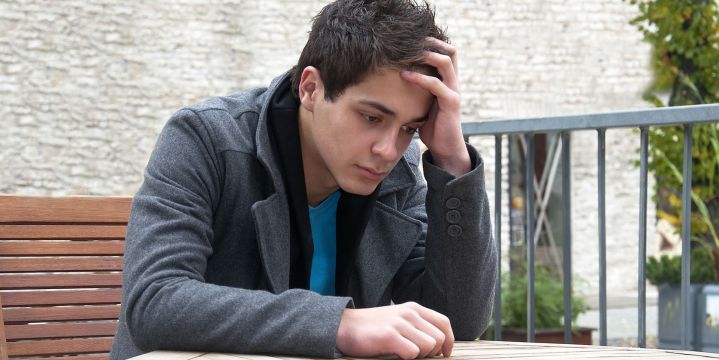 I still remember the first time I saw her, it was January 3, 2013. I was in my first year of Degree College and was at an interview for a team leader position in New Delhi. She was wearing a purple long coat and the moment I saw her, I had a feeling that she was the one for me. Though we didn’t talk much, those were the days of BBM (Blackberry Messenger) and thankfully, we exchanged our BBM Pins.

She was all that I had wanted from life and more.

There was something special between us and both of us knew it, but I had to get an approval from her best friend before I could even think of dating the girl I had fallen for. So, I spoke to her best friend and we both became friends instantly since we also had a lot in common. Having got her best friend’s permission, I finally took my girl out on a not-so-great first date. After picking her up from her college, I took her to my regular bar. I was quite anxious throughout and was making the worst jokes ever.

It was like I was driving my small car too fast. However, on March 14, 2013, I gathered the courage and asked her out on WhatsApp. And guess what? She said yes! I was the happiest person at that time. I remember calling my friends to share the good news with them.

I had always wanted to date her and when we finally started dating, I did not want to ruin it under any circumstances.

I wanted to make it work since I really liked her. She was and still is perfect. In retrospect, I was a very lazy and carefree person. I did not care about how I looked or what I wore yet she always saw great potential in me. I came from a good background and had all the means to look better, to groom and polish myself, and become smarter. She brought that side out in me.

It took a lot of effort from her side, but she knew I could be better than how I carried myself, and in the end, she got my best version out of me.

We had an adorable and sweet relationship at the beginning where we just held hands and went out to eat at various places. I wanted to kiss her, but that moment never came. She was my best friend and when we talked about it, she said that she didn’t feel any physical attraction towards me. Hence, we just held hands and talked while we were dating for the first one and a half year. But how long could a relationship survive like that? Well, not long enough.

We felt that we were just friends, with a tag and so we decided to take a break in 2014.

It was then that we realized that we were too much into each other. However, she got attracted to another guy and frequently started talking about him. She often told me that they were ‘kind of dating’. Seeing this, I decided to get out of her life for good. I started dating a girl in my college. However, I never really liked her.

It was a rebound and looking back, I still feel guilty about dating someone just to make myself feel better.

As we started to part ways, it seemed like my best friend and I could not let each other go. She realized that she was more compatible with me and I always knew that I would come back to her whenever she wanted me to. Hence, we both left our respective partners and came back to each other in April 2015. This time, we were more like a couple. We kissed and slowly started to get intimate. I was so attracted to her, not just to her looks, but her personality as well.

The connection I had with her made our bond even more special. As we spent more time together, we got more invested in each other. We did irritate each other too and had numerous breaks but we always ended back together. And whenever I was with her, I was the happiest.

Sometimes, I tried too hard to make it work and she got irritated with me for making her my priority and giving the relationship too much, but that’s how it had always been for me.

However, the one thing that I was certain about was that no one could love me or know me the way she did. I wanted to prove to her that I was working on becoming my best version and that I was worthy of her love so I started going to the gym and also applied to MBA colleges in the USA. At that time, we had broken up but I was working on myself to make her realize that I was better than the others. Her happiness had always been my priority.

She deserved the best and hence, I was working to make myself the best.

After numerous applications, I got accepted for an MBA program at a prestigious college in the USA. I had tears in my eyes and my parents were ecstatic. I called her that very second to share the news with her. We decided to meet the next day. I was meeting her after months and seeing her brought back all the emotions.

She saw the progress I had made with myself. I knew her well; she was happy that day, as she’d always wanted me to become better with or without her. We went on a treasure hunt that day and fell in love with each other, yet again.

The more times we fell in love with each other, the more special it became. This was the best phase for us.

We were so into each other that I didn’t want to leave her and go. She was always on my mind; she was my life. I had promised to spend my whole life with her and why not? We had been together for so many years and even though it was on and off, she gave me the maximum amount of happiness.

She was amazing, and I couldn't see all the times that we had motivated each other, spent with each other, hugged each other, loved each other, and just been there for each other, go to waste. I also knew that it would be impossible for us to keep up in a long-distance relationship, but I always felt that there was a bigger force that had a plan for us.

We couldn’t live without each other and the only reason we fought was that we had stopped seeing each other more often.

How could we survive in a long-distance relationship? She made my last few weeks in Delhi the most special for me. I still remember all the effort she’d put into making it a success.

We both had dreamt of settling down in the USA someday. I always told her that I would make it work and never let her down. So, after four and a half years of being addicted to each other, I left. I sat at the airport and cried. I was not at all excited; she was my lifeline and she trumped everything else. But what choice did I have? My parents had so much faith in me and I didn’t want to be a loser.

So, I went to the USA and studied my a** off. I had only one end goal and that was to settle down with her in the States. I got a good GPA and landed an awesome internship. In between, we took our habitual breaks.

I never forced her to fully commit to me because I wanted her to realize it herself, and be happy with her choice.

I always believed in us. I did well in the internship and was on the right track towards building our life in the US. Meanwhile, I wanted her to enjoy her life away from me, and concentrate on her work. The thing that she was most passionate about was start-ups, and I supported her. I was and still am willing to give up all the money that I have for her dreams to come true.

Though I was on the right track with my studies and was motivated for the future and the dream we had, I got a big shocker when she decided to move on. She had started dating someone else. This was not a new thing for me yet it broke my heart because she really liked that guy. We could not live without talking to each other at least thrice a day but since she found him, she did not need me at all in her life. She moved on in seconds and blocked me from each and every app.

It was not her fault at all but mine and ours.

Now the chapter is closed forever and it’s hard for me to digest this truth and live with it. The purpose, the motivation and the most beautiful part of my life have gone away. Her boyfriend is probably the luckiest man on the planet. With this long note, I want to say that I am grateful to have known her.

She is and will always be the best part of my life and I will always love her, no matter what happens. She has been my only source of happiness for so long and I had been hers too, but I understand that she wanted to move on. This is probably the last test I have to go through to make us work and I can’t fail on the last hurdle. I hope she lives her life to the fullest and remains as awesome as she has always been.

I am happy to have had her in my life and I believe in the fact that if it’s meant to be, no one can stop us from creating our happiness together.

There are times when no matter what you do or how hard you try, you cannot hold on to love. Share this story if you agree that if love is meant to be, it will find a way.