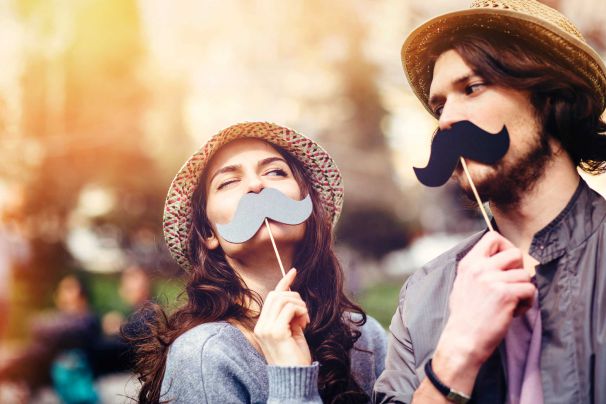 It was the second time I went to Kochi. My flight landed a little after midnight. He had spent the entire day in Calicut to get some work done, and because I was leaving the next day, he had taken the train back, travelled in the unreserved compartment, just to meet me and let me know that I was not alone in that strange city.

He'd been awake for more than 24 hours by then. It was the sweetest Valentine's Day I'd ever experienced, and he behaved like it was all his pleasure.

Very few people are capable of loving you the way you want to be loved, even without making the effort to learn you. In my life, he is that person.

So, maybe I should tell you about the first time I went to Kochi.

The first time I went to Kochi, I was on a flight that landed earlier than my boss'. I had an hour's time to kill. So I decided to check out the local sights and delicacies... on Tinder! In that one hour, I matched with a handful of people- all of them were tall, handsome, and bearded. I quickly gave them my phone number and got on with work. We were organizing an event that day and I was swamped with things to do.

One of them wanted to meet me and I gave him my coordinates. So later that day, I finished my event, and my teammates and I were getting dinner and drinks. That's when this guy showed up.

When I'm sober, I'm naturally uninhibited. But when I'm slightly drunk, I'm the queen of spontaneity! I looked around, and my boss was speaking to someone, so I dropped him a message on WhatsApp and disappeared.

This guy said that we were going somewhere "nearby" but he didn't stop driving. We went on and on and on, and I was beginning to get a liiiiitle worried. So I told him, "You know how some people get worried when they go out with a stranger, without knowing what the other person expects? And absolutely not knowing if someone is a sweetheart or a psycho?" and he says, "Yeah. So?" and then I'm like, "So, I just want you to know, don't worry- I'm safe."

I'm sure he wanted to whack my head or at least snort a laugh, but he remained in gentlemanly control.

So we went to the Kochi Crowne Plaza, which is the only place that has somewhat of a nightlife. And there I realized- this guy doesn't drink, and we weren't going to be doing any "dances", and ALL his friends were there!

'Okaaay, this is a great first date idea,' I thought. I was introduced to the third, fourth, fifth and sixth wheel, and I was sitting and making small talk with more strangers. I don't have linguistic talent with Malayalam, so I kept losing track of the conversation. I was also quite tired by then. In a desperate attempt to stay awake, I started checking out my genuinely hot date. I noticed that my date was wearing a couple of chains around his neck. One had an ACTUAL tiger claw pendant, and another one had something written in Arabic. I asked him, "What does this pendant say?" and he said, "That's my name written in Arabic."

I said "Ooooooh. So that says, that says..." and it suddenly hit me that I didn't remember his name! I was about to be caught out when his friend leaned in closer and whispered "Kabir... his name is Kabir!"

So I spent the rest of the evening trying to make it up to him. You can't beat me when it comes to cuteness, and I'm on a roll, okay? I'm all "Kabir? Kabiiiir... Hey, Kabir!" And for making it up to him, you know, I got a sweet-sweet kiss on my forehead when he dropped me back.

However, back in the hotel, my super-responsible boss was still awake in the middle of the night. I bet he wanted to yell at me. I bet he wanted to say "WHEN I ASK YOU IF YOU'RE OKAY, SENDING A WHATSAPP LOCATION IS NOT AN APPROPRIATE RESPONSE!" But he asked me to go to sleep. That's all.

The next morning, when we were on our way back to the airport, my boss didn't fail to give me an earful about how irresponsible I was and how I'd given him anxiety that entire night, and when he saw that I wasn't as sorry as I was supposed to be, he said. "Chalo, at least launde ko dikhao!" So I opened up his Tinder profile, and THEN, for the first time, I noticed his Instagram account.

I lost my head. My boss was howling. He had about 100k+ followers. Then I looked for him on Facebook. A page showed up with a blue-tick next to it. Then I googled him. Trust me when I say this, he's a pretty big deal of a man... with his own IMDB page and everything.

I don't meet Kabir very often, but when I do, he makes all the time for me in the world. And then he takes me out to meet his friends. I've met artists, actors, musicians, film-makers; in studios, in cafes, in bars. And when I sit with them, I don't realize how easily I belong with them. They're warm and welcoming, and they'll talk to me like I'm their own. It's only when I leave and I'm with other people, I think to myself that life isn't quite the same without Kabir and his friends.

On my way to the airport that day, I was speechless. I called him right afterwards and asked him why he hadn't told me anything about himself. He said that he cared about being a human first. If I was the kind of person who would forget my date's name, then he was the kind of person who loved to celebrate people's hilarious flaws. That day, he told me that whenever I went back to Kochi, I should know that I have a friend to take care of me. And he never fails to deliver on that promise.

I don't have Kabir with me every day. But I have him when I'm alone in a strange city where I don't speak the language. Each time I'm with him, I'm reminded that I'm a really lucky girl. After all, I found a man who knows how to love me the way I want to feel loved.

Obviously, Kabir isn't his real name. Apparently, that's what he wants to name his future baby. The position of future-Kabir's-mommy is still open. #JustSaying

Share this story if you've also discovered that adventures are just one right swipe away.