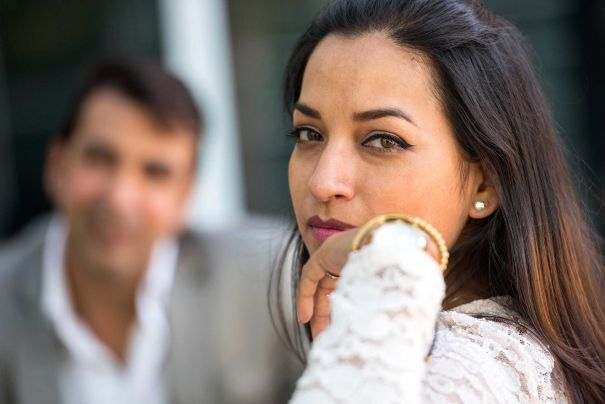 Relationships. Ah! So complicated this word is in itself. You cannot tell when you would fall for a person because love and emotions are like the uncalled-for guests in life. I too fell for someone who soon became a part of my life; a very integral part. Well, my love story is not like everyone else’s because it started with something different. I am 28-year-old girl and I have lived a life full of experiences, both good and bad. I had met him randomly on a road trip to one beautiful destination. That is when I met my man. Yes, my man, I say this with a few regrets. We had a one-night-stand.

Yes, I am not ashamed to share that our relationship started with a physical contact at first, and then our souls met. I slept with him on our second date after feeling somewhat intimate on the first one.

I found him to be the most handsome, the most charming and yes the most attractive man on this Earth! So I fell for him. But, there was something in our relationship that was hurting me. Like all love birds, we too shared everything with each other and did things together. I told him everything about me but he disclosed nothing. As it was only a one night stand, while meeting him for drinks, I asked him about his relationship status, and he was quiet. A young man of 30, I found him to be a compatible soul for me. I asked him on the very first date if he was engaged to someone else, and he kept silent. This happens at times because people usually don’t discuss their relationships easily. And I took it in that sense only. Well, as time passed, we got intimate. Sleeping with him was a different feeling altogether, because he was not the kind of man who runs behind lust. Of course, he was not that kind.

He was smooth on me and what I realized eventually was that he was looking for love, not lust.

As it was a long-distance relationship, we had ample time to learn about and understand each other. He told me more about his profession and his family but whenever I asked about his relationship status, he kept mum. This was hurting me from day one. He would be silent on the topic which is one of the most important topics, regarding our lives and relationship too. With his silence, there were many things running on my mind. Hours of talks over the phone, millions of messages exchanged but still there was a question that was there on my mind and it was about that someone he may or may not have in his life.

I asked him many times if he had someone in his life, he denied most of the times and many times he preferred to be silent. His silence was what killing me from inside, every single time.

Whenever I would discuss with him about the future, he would say, “You don’t know about me well, I am not the right one for you. My hands are not clean.” Oh, my god these words from him always fueled my suspicions and raised my curiosity as well. I tried asking him what he meant, many times, but he always denied. And, one night, I just came to know the bitter truth of our relationship. I finally gathered the courage that night, to confront him and ask him straight up about his relationship. He said that he is afraid of losing me and hence would not tell me. I told him that hiding things would hurt me more than knowing the truth. While he was silent, I was getting more curious because after all, I was planning to settle down with him. I got furious and yelled at him out of frustration because by this time my patience was exhausted.

I said, “Even if you are married or you have a kid, tell me the truth, I want to know.” Although, I had said these harsh words, I was just praying to God that whatever I had said should not turn out to be true.

And then, finally, he broke the silence with, “Whatever you guessed, is right. I am married, and I have a son.” Nothing in my entire life had hurt me more than those words. A son! He had a son. Oh my god. A guy with whom I slept, with whom I was planning a future together, is already someone else’s husband, and not only a husband, but a father too. I could not bring myself to utter a word after that because it was the most disheartening moment of my life. After this, within a moment, I was suddenly standing there as his mistress. It was the hardest truth of my life and maybe his life too. It was never his mistake and I will never blame him for the same because from the very beginning he gave me these hints, and never promised me anything but I was living in my own bubble.

Once he confessed the truth to me about his relationship, he was relaxed. Then he briefed me about the complications in his marriage. With this, he also told me that he is separated. Well, that was some sort of relief for me.

He was not cheating on me and I was sure of this because I know him that well by now. His bitter truth, of course, shattered my soul but yes, my love was not temporary. I decided to be with him regardless. People may say that he cheated because he had kept it secret and hidden his relationship from me, but I felt that there was no harm in that. He finally did tell me everything and he eventually gathered the courage to speak about it. And, you know what? Our relationship strengthened even more after this.

No longer do I consider myself his mistress because I am not one. I am the love of his life, that came after the biggest mistake of his life. Yes, there are unsuccessful marriages, but we should be brave enough to not blindly label people as culprits because maybe they are among the sufferers.

And, this was what my man was going through in these past years before meeting me. His past relationship had given him a bitter experience. He was married at a very early age and this was the biggest mistake of his life. But mistakes need to be rectified, and that is why I am continuing to stay with him. It’s been a long time that we are together and yes, we are happy, too.

Share this story if you agree that those whom we label as culprits could, in fact, be sufferers.