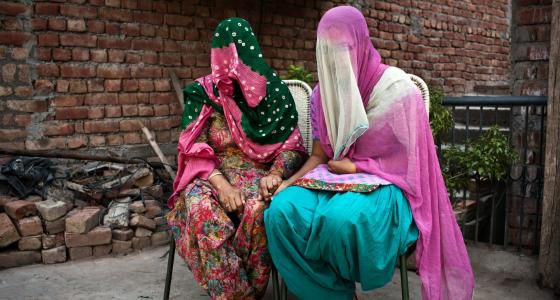 “All men should be feminists. If men care about women’s rights, the world will be a better place. We are better off when women are empowered — it leads to a better society.” ~ John Legend

I am a Feminist. Not since forever. Although I don't remember looking down upon women, I do know that I was born into a patriarchal society where man has an upper hand in everything. I learned the mutual respect between a man and woman from my own parents, but

there was always an unsaid rule in the society that said — 'man has the final say'.

I have been married twice and divorced once and so I've had my difference of opinion in close encounters with the opposite gender. But I do not believe that divorces are always a result of patriarchy. It happens when both people or one person runs out of options to be in the relationship.

In fact, the really small number of divorces is a result of patriarchy I feel.

When I was 17 my father died and we were brought up single handedly by my mother. Though it has a direct influence in my life, I don’t think that is what made me a feminist. What made me a feminist is the society and studyng the underpinnings of it. So much got revealed in the process, I saw a trait that people bear, subconsciously. People are completely unaware that they are also fueling the patriarchy in the society, aiding it if not flourishing, without doing anything to end it.

I have enjoyed sexist jokes in the past, have not just laughed at them but also taken part in making them. I don’t remember when the transition happened. I mean the public revelation that ‘I am a Feminist’. However, looking back I can remember incidents that I find unbearable today. Now when I see a movie and I see a sexist reference, I feel uncomfortable, I feel the total unnecessity of that reference in a movie. When I talk about it, many people ask me to shut up because they say, "Look at the picture and don’t heed to everything said and blow it up".

But I am sorry, it is difficult to not speak up when you're a feminist. It's true.

Movies, books, and social media messages, all have the ability to slowly but steadily infuse sexism into our minds. They say, it is not important to learn new things but more to be reminded of what we already know. We know gender equality is needed and these references only defeat the purpose. Ever since I started using Whatsapp, I have been part of many groups from college and school. Some have women in them but some are purely men. Both kinds of groups have several sexist jokes written all over them.

Hence, Whatsapp for me is a breeding ground for sexist jokes.

Recently I read a few pieces I wrote a while ago, I could even see the underpinnings of sexism in those write-ups. When I read my pieces, I take the effort to rewrite them on what my stand is today. Because it is important to get sexism out of our way, and if it allows you to correct the past, do so. I've heard many men say “Why do we need feminism?” I cannot express it better than what Mark Ruffalo said in his article "My response to the "I am not a Feminist" internet phenomenon".

The moment you ask, “Why do we need Feminism”, you are saying all is fine and we are all equal. But that is so far from the truth.

As a man, look around yourself. Your relationship with your spouse, your mother, your sister, your colleagues, your daughter. Think deep into how you talk and act with them. I am proud to say that my son who is 9 is a feminist. His actions say so, even though he has not fully grappled the essence and even the politics of that word.

In the US, there is a usual practice of bringing your parents home from India to help when your first baby is born. We didn't bother. Even a friend of mine said to me, “No need to bother your parents, taking care of kids after delivery is the responsibility of both the parents." Fair enough, I felt. But one day on a usual check up day with the Doctor, an Indian lady, she asked, “Are you bringing home someone from India”. We said a silent 'No' and then the doctor started explaining to my wife, “You can make sambhar and rasam in small containers and keep it in the fridge and so it is easy to heat and eat”. I knew where she was going with that but I was amused and asked her, “I did not know kids eat Sambhar and Rasam”.

She looked at me and said, “Not for the kid but you, why do you think most Indian families bring their folks here during delivery, because the BIG man cannot feed himself."

It is true that we draw lines in living rooms, in the kitchen, on the dining table, even in the bedroom, that is so biased towards women. Man needs to wake up and acknowledge the fact that for centuries of power, he used to suppress women.

We had a Nanny to take care of our son and it was during this time that we bought a house. When we were entering our house for the first time, our Nanny, who is a woman, pulled my daughter back and said, "first choudary" (our son) should enter. I got the hint and this was because despite being a woman she felt that man entering first in the house was auspicious. I said 'No' and asked my daughter to do the honors of entering first and taking charge.

I am not perfect, no one is but I make an effort to be rational and for me, being a feminist is a rational stand. The fact that I was not evident and public on my stand on 'Feminism' and 'Gender equality' earlier may be the reason why my daughter never told me that she was the President of the LGBTQ club in her school. When I asked her why, she didn't have an answer to that either. The most interesting bit here is that when I tell other people this, they look at me like some big storm has hit our family. Seeing their response, I tell them, "She's not gay." What I hear is a loud “Thank God!”. There are two major issues with people who say they support gender equality and acceptance. One is that you're a hypocrite if you're for LGBTQ rights but you flip of your son or daughter walks that path. Second, you do not have to be LGBTQ to be the President of a club as that one.

Supporting LGBTQ is not about your sexual orientation but about being aware of equal rights.

For men it is important to be feminists rather than saying that the need to say “I am a feminist” is pointless. Because the 'need for feminism' in our society is more than ever today and that goes on the lines of our need for "Being Human". If you don't know the basic definition yet, here's where you can start:

Feminism is the advocacy of women's rights on the grounds of political, social, and economic equality to men.

In a country where you have poems that reference ideas like “the rape victim falls in love with her rapist” and people don't understand the problem with that statement. Where celebrities and politicians and public servants openly talk down women, where actors like Radhika Apte are trolled for doing bold characters, where women are trolled, demeaned and silenced on social media for speaking their mind that some men can't stand.

A society where sexism and misogyny win presidency, where Sunny Leone's name is used always in a degraded manner, where movies use sexism to garner applause from the male dominated and anti-feminist female audience, where Whatsapp sexist jokes make the rounds among elders, the youth, and kids, where female infanticide is prevalent, where marriage is considered the final destination in a woman's life, where men go hungry if women don't cook, where sex is not considered as mutual pleasure but just a showcase of power in the bedroom, when the rape accused is given consideration over his future and the victim blamed for being a woman who is out late partying. Where even minority activists forget to talk about the women in the minority sects,

...and you say 'Feminism' is not needed in such a place?

Feminism = Gender Equality, not a myth. If anything, it is the need of the hour. Share this personal account of a man's journey towards feminism to spread the word.