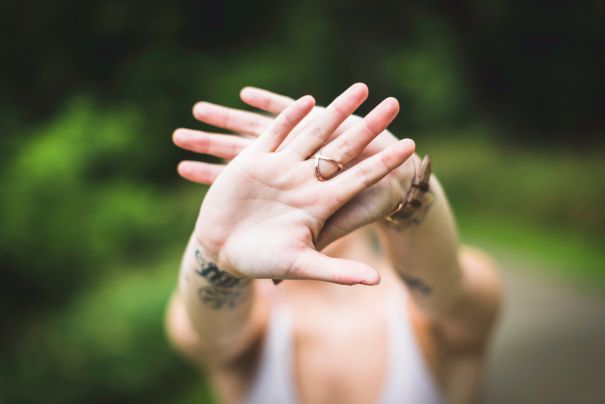 We are the new age married women. We don't wear a mangalsutra, put sindoor or wear chudiya (bangles) or anything that probably symbolises us as 'married women'. Some of us even have children. We take care of ourselves. We work hard. We are fitter (at least we try) and are fiercely independent. We go for holidays with our girls and go clubbing too. We go for office parties and even lunches and dinners (without our spouses).

That does not mean or imply in anyway that we are any less married. Or unhappy. Or anything that signifies we are 'Available'.

We, in fact are happily married and proud. We love our husbands and children as much as we also like our independent lives. So tell me dear men, why do you still fancy us even though we are clearly taken and unavailable?

For example, recently I was at a mall with my two little daughters. I had an inkling that I was being followed by a young man but I brushed it off thinking I'm being paranoid. Much to my surprise, this young man did come up to me and approach me asking for 'friendship'. Never have I been propositioned in such a direct manner even though he could clearly see my two little ones tugging at my sleeves screaming 'mama'. He didn't deter and held his ground. I, on the other hand, bluntly refused and walked away.

Similarly, another friend who runs an online business of accessories has her number sprawled on most social networking sites. So are some of her pictures. Obviously, the only reason to that would be work related and inquiries for orders. So one day, she got a call from some uncle ji placing an order for some items. She took the order and gave him her payment details and order status. But uncle ji didn't stop at that. He wanted to be friends. Being a thorough professional she didn't encourage this and also clearly mentioned that she was married. That of course didn't stop him and he began calling her from other numbers, which later she had to block. She was baffled at what lengths he could go to even though she repeatedly showed him the door.

There are many other incidents that us married women face on a day to day base. As if having kids and a husband isn't time consuming enough. We are barely catching our breaths between organizing our day between sending the kids to school, packing the husband's lunch, picking the kids from school, managing work (for the working moms), picking /dropping kids from extra classes, doing household chores etc etc. Do you really think we have the energy or the time to entertain such frivolous friendships or relationships??The answer is a big NO.

Last but not the least,

Let me tell you this. Please respect the fact that we are married. Please try and not cross your boundaries. There are far too many respectable single women out there who could be great prospects for you to be friends with. And even if they are not interested in you, try and respect that too.

So the next time you see a lady who is attractive and you approach her and if she tells you she is married, she is clearly feigning you off. Kindly leave her alone and let her be. Because that's exactly how she wants to be. Left alone.

Sincerely,
A (very much) Married Woman.