Read the first part of the story here: Meeting Her Reminded Me Why A Girl And A Boy Can Never Be 'Just Friends'

I had screwed up our first meeting but I vowed to make our second meeting fruitful and I made it count. And the rest, as they say, is history. Yes, we - Sameer and Priya - were in a relationship in college.

We had the best time bunking classes, catching up in the cafeteria or just aimlessly rambling in the college campus talking sweet nothings. We were a happy couple. However, God decided to play spoilsport then too.

Her closeness to her best friend Rahul became a bit too much for me to handle. I failed to understand why the guy could not mind his own business!

He was her classmate, her friend, but he called her for just about everything; it seemed ridiculous to me. Priya and I had several long discussions about this topic. Every time it ended with her convincing me that he was just a friend, a friend for whom she cared, her best friend.

And as always, girls have the last laugh in any argument.

Then came Valentine’s Day. I had decided to make it special for Priya by gifting her something that would become a part of her existence and remind her of me. I wanted to give her a sweet token of my love and had been saving my pocket money for it. After a lot of deliberation, I zeroed in on a silver bracelet.

For me, a ring was a bit too early at that stage. A chaste and sober bracelet seemed perfect.

We met during the lunch break on Valentine’s Day. When I tied the bracelet on her hand, she had tears in her eyes. For a practical girl like her to be so emotional was strange, I had never seen her cry. I realized what the bracelet really meant for her and the way she felt for me.

It increased my love for her and I started believing that we shared a strong bond of trust and love, which no one could break.

“Promise me,” she said. I promised her and asked her to promise me that she would always wear the bracelet as a token of our love. A tear escaped my eyes.

After a few months, we broke off.

Once again, I was jolted back to reality. She tied her hair neatly and adjusted herself on the seat. She looked even better with her hair tied. She looked at her watch. It had been almost 2 hours.

As we helped ourselves to another cup of tea, I said, “I did not leave you. We broke off because that was the best thing for us at that moment. You had lost interest in the relationship. You were more involved in Rahul’s life.”

I just wanted your happiness, so I decided that if you were happy with him, then it was better to let you go.”

I tried to sound a bit generous. I had mastered the art of faking.

“Did you try to explore the truth? Did you talk it out?” she asked. I told her that there was nothing to ask because it was evident. For almost a week, I'd tried calling her at 11 in the night but would always find her busy on the phone with Rahul.

I asked her, “What could I infer from that? My friends even told me that they had spotted the two of you together on a number of occasions. When I asked you, you said that you’d let me know when the time came.”

“So you did not have the patience to trust me?” she smiled.

For the first time, her smile did not impress me. It actually pierced me.

“I would have told you,” she added.

“Yes, perhaps you would have told me ‘Let’s call it quits’. Before you could do that, I did it and in a way, I paved the way for a better future for you.” It was sarcasm at its best.

“Your male ego!” she almost shouted.

“The truth was that Rahul had fallen for a girl but the girl was not ready for a relationship. He was really low and didn’t want to share it with anyone. Being his best friend, I was there to help him out.”

“He needed someone to stand by him and give him the courage to pursue her. All those calls were related to their relationship and all the meetings with him mostly revolved around them.” She emphasized on ‘their’.

“And guess what, the hard work paid off. She accepted his proposal after a few days.”

“You never wanted to hear anything or give me a chance. You had called it quits; you had broken the trust of our relationship.”

“A relationship is like glass, once broken, even if you try to join it, the scar remains.”

I was dumbfounded. She had explained it perfectly. Then she dropped the last bomb.

After the girl accepted Rahul’s proposal, my friendship with him went for a toss. As you know, she was not comfortable with our friendship. So Rahul started ignoring me too.” She stressed on the ‘too’.

I could sense that she was on the verge of crying.

Once again, I’d managed to make this practical girl emotional. But this time, it was not in a pleasant manner.

She composed herself, “We lost touch. He was happy with her and I was happy for him. I did not try to contact you because you had broken my trust.”

“I believe that love is worship, worship with trust.”

As she finished, I saw the train chugging into the station. The rain had stopped and the sky had cleared. The sun was peeking out. My mind felt calm; everything seemed clear and pure, as the sun slowly appeared in the distant sky.

I had a sense of euphoria as well as dejection.

I had made a mistake by misunderstanding her but she was paying the price for her belief in the purity of relationships.

It’s a nasty world! I hated myself for doing this to her. I should have trusted her. But it was too late. God was hell-bent on making my trip worse.

As the train arrived, she stood up.

“I will have to leave. It was nice meeting you after a long time. Have a happy married life.” She extended her hand. I could not utter anything and quietly shook her hand. I just managed to mumble, “Take care.”

I wanted to invite her to my marriage but could not muster up the courage. Something kept disturbing me. My mind kept wandering back to my college days. Suddenly, it struck me. I realized that while shaking her hand I had noticed something. It was not déjà vu.

It was the same bracelet that I had given her on Valentine’s Day, my last gift to her. She was still wearing it.

I felt extreme guilt. I turned around to find her but she had gone away, far away. I wanted to set things right immediately but I was about to get engaged! This enraged me even more.

I looked up at the Almighty and asked, “Why me?”

Her words echoed in my ear, “Love indeed is worship, worship with trust.”

Lack of faith in your partner can ruin the most cherished relationships. Share this story because it is important to understand that trust is the backbone of every relationship. 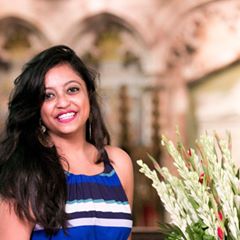 Travel Journalist and a storyteller. 24 years old Indian female who decided to Work 9 - 5 earn and explore. She planned to take a plunge towards story telling while she is on the move around India. She decided to be her own boss, when it comes to traveling. A dreamer, have always room for desserts. Loves to pen down everything that comes from within. Loves life to the fullest keeping all the darkness and sorrows away.