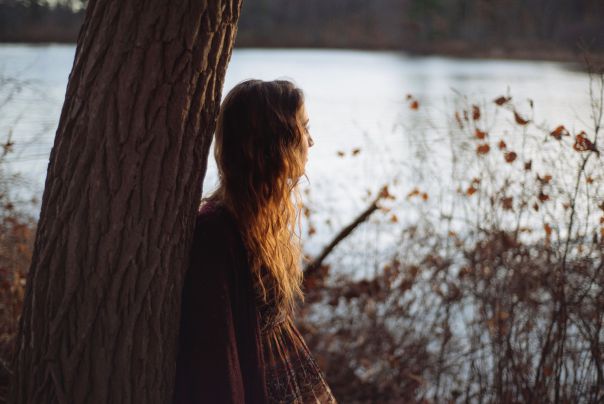 READ THE FIRST PART HERE: They Fell In Love When They Were 16 But Life Forced Them To Grow Up Like This

Even though in the last eight years I was used to having him around, I believed him. That fateful day finally arrived. We stood there at the airport, I couldn’t get myself to look at him. He smiled, he knew me better than I knew myself, "You’re thinking again. Don’t. Everything is going to be fine. I told you, I’m coming back for you, very soon."

He waved his hand towards us and gradually disappeared behind the glass doors. And that was the last time I saw him. Shristi paused. She looked at me and smiled.

I knew this smile now, there was great sadness hiding behind it. It was deceiving to all, unless one saw her the way I have. I had asked her once, how could she smile when she was in so much pain?

Her reply still rings in my ears, “It’s an art. When I know I have no control over a situation, all I can do is just wait and watch. I know destiny is playing a dirty trick on me once more. So, I smile, to let life know that I’m ready, show me what you got!”

Shristi continued, “Raj was excited about his new job. He had finally found what he had been looking for. He called me every day, just as he had promised and we spoke for long hours about both our days. Gradually though, work pressure increased and the frequency of our calls reduced. His weekends started getting busier than his weekdays.

A year passed, and he didn’t have time to come home. The distance between us suddenly felt much longer than a two-and-a-half-hour flight.

I tried talking to him about the distance but his reply was the same, "Don’t think so much. Keep yourself busy and before you know it, we’re going to be back to how we were. I told you, I’m coming back for you. I promised. You’ll be okay, right?"

Something was missing from his words, or maybe I was just impatient and wanted to find a reason to fight with him, to bring him back home. Furious, I hung up, hoping he would call me back. The landline rang the next morning, much before daylight broke.

Maa picked up. A few seconds later, she woke me up and asked me to follow her. It was Raj’s mother.

All I can remember now from the conversation was, "Raj… last night… car lost control… bridge… on the spot…" The floor below me sank.

The phone slid from my hand and that’s all I remember. I woke up on a hospital bed, everything was over by then and I knew I had to come to terms with reality but all I could think of was Raj’s words, "I will come back for you." Shristi took a deep breath.

I went close to her and whispered, “I can understand the pain you’re going through. You’re such a strong woman. If I were you, I don’t think I would be as charming as you are. I wouldn’t have been able to face the world after something like this. But it’s time you don’t think about anything, just relax and think about yourself. Love yourself and be alive, for yourself.”

I was tempted to bring up the reason we were sitting here at my house in the first place.

We were going to meet at our usual coffee shop, this time though, I had a hidden agenda. I was going to set her up with a decent friend of mine. He was new to the city and I thought maybe they would help each other. I was running late from a previous appointment, and just as I entered, I saw Shristi running down the stairs. When she saw me, she grabbed me and shoved me in her car. She was sobbing.

I saw my friend waving at me through the window, but I couldn’t do anything except call him quickly and tell him there was an emergency. We were driving back to my place but Shristi was silent through the drive. I was too concerned about Shristi to listen to anything that my friend had to say.

She was pale. I stayed quiet all the way until we reached home. Once we were inside, I got us both some tea and that’s when she started telling me about Raj.

“So what happened today… is it connected to Raj?” I asked her cautiously. She looked at me thoughtfully for a moment. And then continued, “I was waiting for you at the coffee shop. Ordered both our drinks and was just waiting for you. A guy walked in, he sat on a table across from me. I didn’t notice him much at the time, but he was on a call and that’s when I looked at him- like properly looked at him. There was something so familiar about him. The same arrogance in his eyes, similar style of waving his hands while he spoke. I realized I was staring. And he did too. He pointed at himself first, and then me, the confusion on his face was evident.

And just like that, I knew Raj was back. He got up, came towards me and stretched his hand out, "Hi! I’m Shri, do we know each other?"

I could barely say anything more than "Hi…" All I was thinking, was that Raj kept his promise. He had a grin on his face and in an almost flirtatious manner he said, "You have really brown eyes…" I couldn’t breathe. And that’s when I ran.

I knew he wasn’t Raj, of course he wasn’t. It couldn’t be Raj. And that’s when I saw you, and that’s why we’re here.” She sighed.

I couldn’t say anything.

“Sure…” She was confused, but found an old one in her wallet. I stared at the photo and smiled, he didn’t look like Shri at all. Except for the small, corner smile. This was serendipitous.

Shri was my friend, the one whom I wanted to introduce her to. This had to mean something… The start to something wonderful.

I trusted my gut but I knew that now was not the time to say anything. Shristi stayed over that night and I was left deep with my thoughts, with Raj’s last words to her.

In our lifetime, we meet so many people and while some we meet just once, some could be for a lifetime and there’s always a purpose behind every encounter. I felt that five years ago, meeting Shristi was in her destiny, to help fulfill Raj’s promise maybe?

Right now, I’m tired and not sure of what I should tell her about Shri, but I know that the right path will find them and it’s going to be perfect. Her smile, with the pain hiding behind it, will come out to be what it is, her beautiful, beautiful smile, with nothing more behind it but happiness.

READ THE FIRST PART HERE: They Fell In Love When They Were 16 But Life Forced Them To Grow Up Like This

The adversities of my life has built me stronger than you can think. My life is not that perfect circle ! Even then I believe in keeping myself happy and it is only me who is responsible for my own happiness.