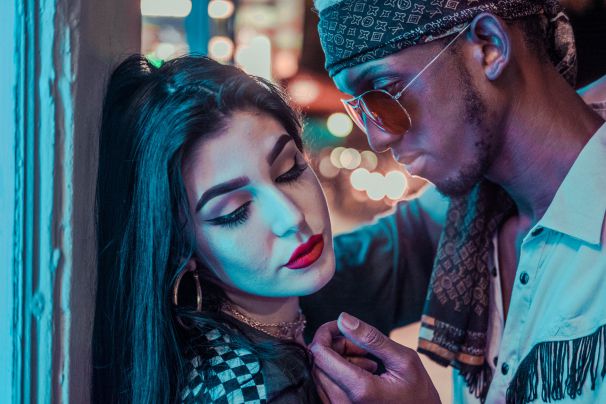 I am a middle-class girl married to a straightforward, decent, middle-class IT man. It was an arranged marriage. I don't know how this happened because, believe me, I'm not that type of a girl who just meets a guy for 15 minutes and says 'yes' to marry him.

I have my sexual needs, and I make sure I fulfil them. I've had my share of friends with benefits.

I had my first boyfriend in class 11, and he was quite handsome. My best friend liked him too, but she had no idea that he liked me. She was charming and more attractive than me. So that was how I knew that love was 'blind'. We dated each other and we used to exchange letters (no mobile phones, unfortunately). We would decide on a time to talk at night on the landline. We would talk for hours and got high phone bills and low marks. After a particularly bad report card in Class 11, his parents sent him to study diploma.

We use to bunk tuitions and go for a drive on his bike and whenever we found a lonely place or hidden area, we would stop and make out. Kissing and touching each other in the '90s was a pretty big deal, okay?

Then, after school, I went to Punjab for my engineering. I didn't have a boyfriend in college there but back home, I had a neighbour who used to call me all the time. I don't know how we started dating each other. He was at least 5 years older than me and was much more experienced. He would take me around in his car and there was a lot more of that- touching and kissing. He knew exactly how to turn a girl on.

But I was too impatient. He did finger me well, but I had to do something about it. I left college once without informing anybody, just to stay the night with him. Unfortunately, I got my period. We spent the entire night in his car and in the morning, I asked Dad to pick me up from the bus stand.

When I was still in my 3rd semester, he insisted that he wanted to marry me. So I asked him to wait until I finished college at least. He didn't/ Soon there was gossip in our mohallas that he was getting married. I was heartbroken- more than that, I hated him. For a while, my boyfriend from school used to comfort me. And then soon, BTech got over. I came back and joined my masters degree.

There were a few girls in my batch and I made friends with them. By the time we got around to the second semester, there were a bunch of boys in my group and only one other girl. We used to hang out, chat, call each other (thank God, mobile aa gaya tha). One day, I came to know that Ravi in our group liked me. I didn't like him back. It was becoming a little awkward because he would keep looking at me with some other intention.

To remedy this situation, I started talking to Rahul. He already had a girlfriend, so it felt safe. Rahul and I used to spend time together. I'd always ride pillion on his bike to avoid Ravi. But soon the situation sped up. He would deliberately ride faster than the rest of the group so I could hold him from behind. We all used to spend time at Rahul's place and even though I cooked horribly, I was the only one who could and did.

Rahul and I- we didn't know what to call our relationship. But that didn't stop us from eventually having sex with each other when our friends weren't around (and one time in the kitchen when all our friends were sleeping in the next room).

One day, Rahul didn't show up at college. My friends (not knowing about our situation) told me that his girlfriend had visited him, and they were going to "do it". I was pissed off like I had never been before. Just the day before, we had done it, and now he's in bed with another woman? I was mad. I didn't know what to think.

Exactly at that time, I got a call from Sunny- a friend who worked in the Merchant Navy. He'd had a fight with his girlfriend and she had broken up with him. He was onboard the ship and needed a shoulder to lean on. I was there. He could call me day or night and I was there. It also really helped me avoid Rahul.

Rahul and I would speak normally around friends because we didn't want to create a scene. But really, that was it. Then one night he got drunk and called me. I didn't pick up. Then he messaged me saying that he was heartbroken. His girlfriend was cheating on him with someone else. And so we talked and talked until we fell asleep. Maybe it was because we missed the sex, we were back to talking terms.

Meanwhile, Sunny and I had bonded. So when he came back for vacation (which was a long vacation, by the way), we'd be out on long drives and keep partying all the time. When he went back on the ship, he for stuck on the Mexican border due to some shipping issues. It took him forever to sort out the issue they had and he was very depressed. It cost us ten rupees a minute to talk to each other and we would speak for HOURS!

Soon, we all got jobs. Rahul went to live with Ravi, so we couldn't do much except make out in a car. And when Sunny came back for vacations again, a bunch of us went on a holiday to Manali. Of course, we got super drunk. Sunny put me to bed one time and it became more than just 'tucking me in'. We obviously wanted to have sex, but we couldn't because we were sharing rooms with other people. But that was the moment. That was the moment I knew that Sunny was the man for me. In my head, I saw myself as his wife. It was as if he was reading my thoughts when he said, "I love you."

As soon as we came back from Manali, Sunny's cousin spoke to his dad about us. But then his father said "Oh, they are just good friends. I don't think anything can happen between them. Besides, I have other plans for Sunny."

And that was it. Case closed. Sunny said our relationship didn't have a future or he would have to disappoint his family. Again, I was let down. Crushed. Angry.

I needed to take it out somewhere. I couldn't keep holding on to so much disappointment. I called up Rahul and he came over to my place (with a condom, thank God). And so, we officially became friends-with-benefits. Thankfully, that was enough to make him move to a place closer to mine. Whenever I wanted to, I could call him. We would go to each other's places in ten minutes. That's all it took for us to get lucky.

This turned out to be a sort-of love triangle between me, Rahul and Sunny. Rahul because the chemistry was unbeatable. I couldn't keep my hands off him. He kept coming back to the topic of how much he likes me but I couldn't give myself to him completely because Sunny was on my mind.

Sunny would always be away and his excuses were unreasonable. But we still spoke to each other. The next time he came back to India, we went back to Manali again (where our physical relationship reached the next level, thank God). But as soon as we came back home, his parents started bride hunting for him. Without telling me, he started meeting those girls and showed interest in them. The ultimate irony was when his mother came over to me and asked me to talk to him about a girl. She wanted my influence on him so that he would accept her.

Sunny, however, did NOT disappoint his mother. He liked the girl that was chosen for him. I asked him "What about me?", and he said that since I'm his bff, I should just be happy for him. That's when I walked out. I couldn't stay friends with him anymore. Too awkward. Meanwhile, Rahul and I maintained status-quo. Orgasms couldn't hurt me, right? I never spoke to him after that, especially when he wasn't there for me even once, when I was there for him during all those times when he was "depressed" on his ship. What a loser. I didn't even stay around for his wedding.

Eventually, I got married and moved to Bangalore. But I was never sexually satisfied with my husband. I would keep talking to Rahul (who also got married later) and we were wondering if we were just sex addicts or got married to the wrong people. Three years later, I'd had a child. Sex was at an all-time low with my husband. When I went back to my hometown, I got the chance to meet Rahul again. He was showing me his new apartment when his wife was at work. Yes, I know. How convenient.

Anyway, I fed my baby there and soon, he was fast asleep. And we finally got started! After so long, I finally had an orgasm. My husband was really no good at it and I was quite tired of helping myself. I do feel guilty about sleeping with someone else but I have always tried to spice up my relationship with my husband. It has never worked. What I did maybe wrong but it's on me to live my life to the fullest, no?