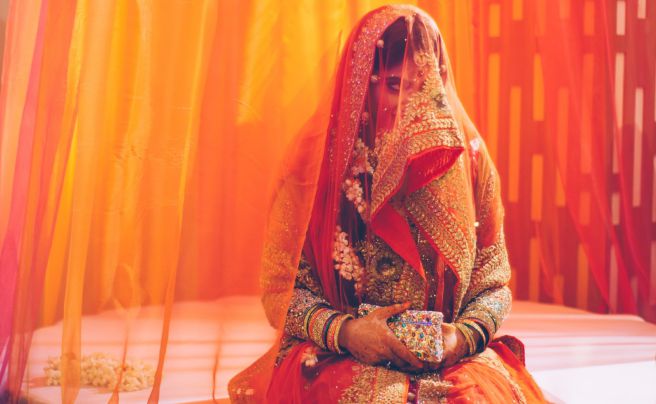 There I was burdened by the weight of the gold, wrapped in an expensive creation of a designer, sitting on a bed decorated with rose petals. Roses are my favourite but at that moment I was almost allergic to them. I was sad about leaving my home, I was sad about leaving my family and I was scared. Scared about the new life I was going to lead, the changes my life would be going through but there was one thing giving me nightmares for a month... that was the thing escalating my heart rate most.

Arranged marriages are sort of a tricky affair. They are a gamble that both the groom and bride play, which either results in new love stories or has a devastating effect on their lives. I was about to find out which way my marriage would head.

He came inside. With every step bringing him closer to me, my heart clenched tighter with fear. I tried not to look up and assumed that he was scanning every curve of my body, fantasizing about every part and feeling proud of his latest possession. "Rema," he called, in a rather nervous tone. I looked up to realize that he was as nervous as me. He had warmth on his face and not the beastly lust that I was forced to believe he would have. Wasn't I officially his? I thought he was ready to pounce on me.

I wondered if this was going to be different. My biggest fear, my first night, the night I was going to share a bed with a person I was not in love with, whom I had just met five times and skyped with twice or thrice a week for two months. That was all the connection we had developed. Oh yes, we did like each other’s Facebook pictures as well, if that makes a difference.

My maasi had found this match for me. He lived in Australia, while his parents lived in India and were part of some social group my maasi had been an old member of. I was introduced to him during his short visit to India. We met, we spoke for a little while, our parents liked us and each other’s families. We were soon bonding over the samosas, so yes it was 'Mubarak ho' time for our families.

I said yes but I knew I was not attracted to him. I wasn’t pressurized by my parents, but I said yes because I had no grounds to reject him. "Love takes time, and that is what I have lived half my life believing in," mom had said. Maybe, he was the one.

But then my friends who are married warned me of these shy and quiet guys, because they are supposed to be more dangerous on the first night. "You'll wonder why you can't forget things more easily," they said. They used the word "animal". That's what he would become on the first night. He wouldn't care about emotions at all. Why not just conquer the latest possession?

Men fantasize the first night since the time they get engaged. They make it a point to make their wife agree to whatever they command. All their sexual fantasies that were frustrating them meet reality and the wife is left shaken to tears. That newly wed wife is now an unsuspecting toy. I asked if one could avoid the first night due to the tiredness and emotional outbursts. They laughed, "The guy doesn’t care, you will be his property then! But don't worry you will gradually learn to deal with it."

I regretted that conversion because it scared me to death. Marriage suddenly became from being a fairy- tale to the worst nightmare anyone could have.

I didn’t want to be tagged as someone’s property. No that is not what I had imagined my life to be. I wasn’t a virgin bride, neither was he. We had discussed it over skype. He knew my history and I was aware of his. But trust me when he was approaching me that night, I was more scared than a virgin could ever be. I liked the idea of making love but then it has to have love in it, doesn’t it?

I don’t know how most men manage to be harsh enough to treat their bride like slaves on the first night. The women are made to do things they don’t want, and that is what scared me. I never understood the big hype around oral sex. I don’t like taking it and I don’t like giving it. For me, it feels really disrespectful.  I had sworn to myself that I would never do such things.

I don’t judge people who have such desires but for myself? I would hate myself for doing it but I was told I will have to do it whether I want to or not.

He came and sat next to me. He asked me get comfortable and do away with these extra layers that I was embroidered with. I sensed concern but it was overridden by what my friends and relatives had fed me with. I changed and came to him. Soon I was saw my worries fading away as he rubbished all my negative thoughts. "Don’t you think arranged marriages are funny?" he asked and I smiled with a sigh of relief.

Soon we were both engrossed in a conversation with fun and laughter. He told me I could sleep if I wanted to as he was a night person and was used to sleeping late. I didn't because I was enjoying my first night. We discussed everything we wanted to. He made me comfortable by saying first nights don’t usually have to be what is shown in the movies. We would definitely take time so I didn't worry. It was as if he was reading my mind.

"It is not my sex life, it is ours. There might be things you are not comfortable doing and similarly there are things I wouldn’t like. We will explore it together and set our own guidelines. Guys get aroused when girls are enjoying it too, I would never be happy making you do something that I know you don’t like. Sex is complex because people make it look like that, it is different for different people. I assure you it will be different for us, just the way we like it and not what others do or have done in the past," he said.

I think those words were enough for me to be left cupid-struck, because the man in front of me, my husband had made all my fears disappear in the first night itself. He lived up to the vows and that made me feel something for him. I was glad it was not going to be his journey but ours together.

We didn’t have sex on the first night but we did the night after that because we both wanted to. Mine wasn’t a love story every girl had dreamt about but the man I am married to for four years now has never let those first night fears come back to me.

I thank my maasi every time I meet her. My husband changed so much for me that night, he made me grow as a person and rise above the judgemental attitude we inherit from the society. I'm not saying that it is pleasant for everybody. I'm just saying that it doesn't have to be as bad. My husband and I discovered the key to communication that night. It was in a smile.

I am just another girl who was worried about my first night more than anything. I just want to say that arranged marriages are not as bad as we are told they will be. They can also be the way you want it to be.

Empower others into talking about their stories by sharing this article.

Has Holi Become A Festival Of Fear For Women?