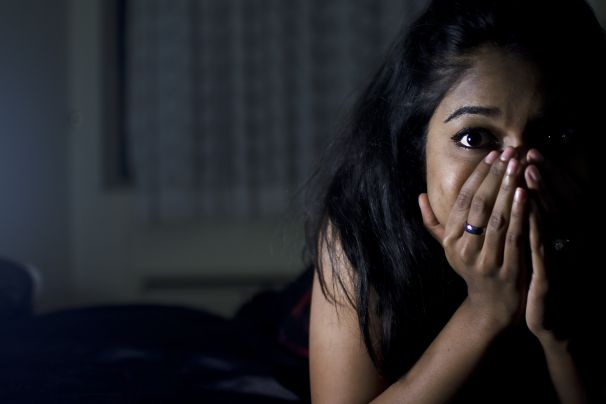 How would you feel when you go to sleep fully clothed and wake up the next day to find yourself naked in your own bed? Well, I was really very horrified when this happened to me.

I was so very shocked when I personally experienced this that I wanted to get this out of my mind and heart by writing about it.

Last night, my best friend and I had a massive fight which continued well past midnight. I was so physically and emotionally exhausted at the end of it that I just decided to go to sleep. I was too tired to even change at that time.

I just wanted to quieten my mind.

I usually get up at around 7 a.m. but I wanted to sleep for some more time that day so I set my alarm accordingly. I lived on rent with my roommate and she had gone home that weekend. Just before going off to sleep, I wondered if I had locked my door properly. I vaguely remembered locking the door but I was too tired to check it out again. So I just went to sleep.

I woke up before 7 a.m. without the alarm and realized that my hoodie was missing.  I was horrified when I noted this but was even more shocked when I saw that I was not wearing my jeans too. I was wearing nothing but my undergarments.

I started panicking now. Perhaps my mind was working at lightning speed at that time because so many things had gone haywire in my life recently. My clothes were lying on the other side of the bed. Everything else was in its place except my clothes. I called the friend with whom I had fought the previous day and told him what had happened.

In the midst of all this, I realized that he was really my best friend.

He calmed me down and tried to reason with me. He told me that perhaps I had been too stressed to recollect that I had undressed before going to sleep. He also said that maybe I had been feeling hot in the night so had removed my clothes in the middle of the night and did not remember doing this.

He was right but at that point in time I just couldn't calm down my frayed nerves.

I felt like someone had taken advantage of me or had done something wrong to me. My survival instincts started kicking in now and I told him that I was going to call the police. Now that I am writing about it I realize that I had overreacted about the whole thing.

But after seeing and reading about all the stuff that happened to women around the world, I think my mind automatically assumed the worst.

My friend asked me to check if the door was still locked. So I checked it out.  Our door had two locks on it. One opened with a key and the other one had a sliding bolt. This is when I became really panicky again. I noticed that only the door which opened with the key was locked. It was easy to tamper with this kind of a lock.

So I assumed that maybe someone had crept into the house when I was alone and had done things to me that I could not even remember. I wondered if someone had spiked my water or had played around with me. I was unsure about what exactly had happened and even thinking about the worst case scenario put me in panic mode.

I opened the door and then saw that the entrance door at the front was locked from inside. This door had a sliding bolt on it.

I was so very relieved to see this.

I realized that no one had entered my house. The only possible thing that could have happened was that I had removed my own clothes when I was in a subconscious state of mind and couldn’t recollect doing this.

But I can never forget how I felt when I woke up to find myself in that state. I was really horrified at that time.

Even today I am unable to find the exact words to describe the fear that I felt at that time. I am eternally thankful to the Lord for the protection that he has given me.

But I also want to pass on a strong message to all the people who face such fears. I want them to know that they are all brave souls because they are doing a great job by confronting their fears. I want you all to know that you are not alone when you are scared. And that it is okay to be scared sometimes.

I had experienced this sense of absolute fear only for a few brief moments but I still remember how I felt at that time. The crippling angry feeling was accompanied by total helplessness.

As for my problem, I realized that I had a sleep disorder called Sleep Strip Disorder – in which a person removes his/her own clothes when they are sleeping. The excessive stress that I had been experiencing at that time had triggered a situation like this that night.

So I am now consciously trying to be more relaxed and calm.

After experiencing this personally, I feel that all of us really need to be aware of our bodies and our lifestyle. We need to take good care of ourselves in order to avoid such stress-induced disorders and problems.

Please let me know if you have any kind of sleep disorder or if you know anyone who is going through such disorders. I just want to know if I was the only one who experienced this because I was so stressed out that day or if it is a common problem that others too face. I don’t know much about my disorder so I would love to see your suggestions about how I can overcome this problem.

Share this story if you too feel that we grow as a person only when we confront our fears and consciously work on overcoming them.