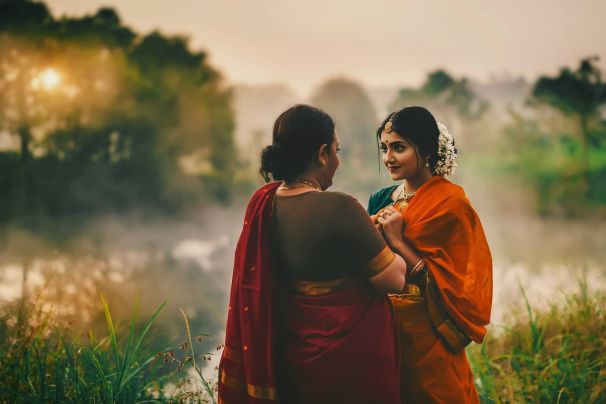 It is not easy to summarize an Indian Bahu's life but I shall try my best. Like most girls, I also grew up reading Mills and Boons novels and watching romantic movies.

So when the time arrived for appearing with a tea cup in my hands, before strangers, I did not refuse.

Things proceeded rather quickly once the tenth contender finally 'approved' of me and my relatives felt elated. There was no dearth of advice and I was given a list of 'Don'ts' rather than 'to dos' after I entered my in-laws' house.

The marriage itself was a very overwhelming experience and I was left wondering where this would lead to. It suddenly seemed like a congregation of relatives and not exactly a special moment for me and my would-be.

I am sure Indian bahus will agree with me on this point and that is where we differ from the rest of the world.

After a few days of my marriage, I relished the 'free time' since I had resigned my PR job and had married a man with a farm house. It seemed romantic until reality struck me - the city born and bred girl.

The silence seemed to kill me. It was indeed a kind of a culture shock but then I had chosen my own destiny and had nobody to blame except myself.

Thankfully, one of my sisters in law (I have six) reminded me that I used to write poems and asked me to start writing again. Another gave me the idea of blogging and thanks to them, I started writing again. By the grace of God, I have now become a writer and poet. Some of it is ghost writing, so I do not get the credit for it but it does not matter. The money does help. It makes me feel free!

My point is that no one should lose their own identity after marriage. The Indian bahu often sacrifices her ideals, her wishes and her wants for others and ends up hiding her own feelings. Her own freedom also sometimes. Try not to do that. Even if it is a cup of ice cream, why sacrifice the small joys of life.

It is easy to pick arguments but hard to love others, especially if they are against you on the basis of prejudices that are baseless.

It was hard to respect and love my in-laws because they were not so loving at all and were overly obsessive where my husband was concerned.

My late dad's advice helped me in not hating them. Ultimately, it made them love me more than their own children. Even though my mother-in-law was strict, her wise words helped me and I now take care of her because she is slowly succumbing to dementia. She was smart and she helped me become the lady that I am today. Her scoldings made me cringe in the beginning but it now helps me run the house.

She taught me not to lose my identity.

The cover image is a work of art by Arjun Kamath Photography.

Note to every Indian bahu - do not lose your identity, be yourself, and take care of yourself

It's okay to have an arranged marriage and it's okay to not love your husband's family. What's not okay is to lose your identity in the process. Share this story to change the game, it's high time!