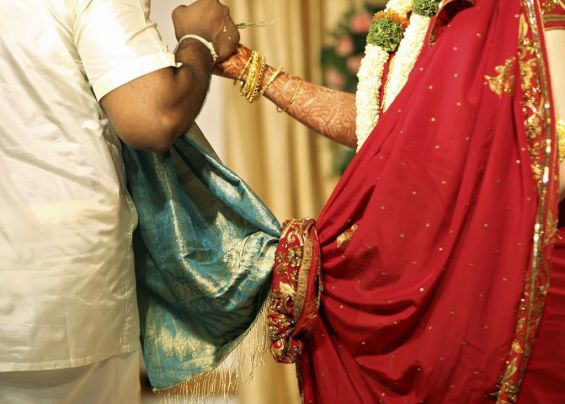 I had always wondered how arranged marriages really work. You marry a stranger and you have to spend your wedding night with a stranger (at least) in bed where he would probably not be able to resist touching you. Is it the most thrilling adventure of their lives? Or is it as scary as it seems to me? Well for me I can say, it was anything but all sunshines and rainbows.

In my head, I had it all painted ever since I understood what couples do in their bedrooms. I had dreamt of a perfect first night with my husband because I knew it only comes once in a lifetime, at least that's what we wish for.

If not with my love, I'd at least fall in love with my husband the first time we sleep next to each other.

That's what I had thought. Unfortunately, I wasn't as lucky as my friend Nandini who got married recently and she probably experienced what I only got to dream of. Of course, how could I live my dream? I fell in love with a boy in my college but I got married to my brother. My first cousin. My mother's brother's son. Yes, the one I was probably supposed to play house with as kids, I was forced to do coupley things with him that were playful only to him. And this is how it all happened.

The little town where I lived with my family was more oppressive than conservative and my mother says she had to endure a lot of hardship to bring me up in the society we lived in because apparently, I was a very outgoing and fun-loving South Indian girl. Is it a bad thing? And is it not her job as a parent to bring me up?

But, I had to pay a heavy price for her misconceptions because she was an overdramatic mother and even though sometimes I knew she was acting, her emotional blackmail almost always worked on me.

Fortunately I left home for my higher education and there I met Deepak, he was my senior in college. He respected me for who I was and not how I repeated my clothes every ten days. He kept telling me that I had potential, and I couldn't wait to graduate and conquer the world. He and I eventually fell in love.

But my mother had other plans for me. The minute I graduated, I was told that I should get married - to her brother's son, no less. No offence to South Indian traditions but this culture of marrying your own cousin to 'stay in the family' always made me question our morality. I tried to calmly reason with my mother and tell her about Deepak. She instantly flew into a sentimental rage. It began with "The boy is not of our caste!" to "Oh, how shall I show my face to my brother now?!" to "Is this what I brought you up for? To bring me a bad name?".

My uncle's family was very well off. My mother followed the logic that if I married my cousin, I would always be provided for. His wife had scorned at my un-powdered cheeks and my not-gold jewellery at every wedding we attended. But that didn't matter, like it doesn't matter to almost every conservative Indian mother.

My mother and I had the biggest screaming match at each other for days together.

In the end, she held a knife at her wrist and I was too afraid and too emotionally drained to protest any more. She did not sleep in my room that night, but the next morning, I felt the emptiness in my stomach. I had spent the worst days of my life crying out to silence.

Nobody would respond, nobody would say a thing. I was voluntarily jailed in my room for about eighteen days trying to come to terms with the fact that I had to get married to my cousin and I had no option but to hope that it's going to be nice, as it is for most South Indians. Whenever I managed to think like that, it did make me feel better temporarily.

When my mother finally informed me that the wedding had been arranged, I accepted it thinking of it as an arranged marriage and I decided in my head that I'll not think of it as an 'incestuous relationship'. Everything was done in the greatest hurry and secrecy. I was too numb to protest. I knew Deepak was gone. It was either that, or my mother committing suicide (or not).

On the night of my wedding, my mother gave me a cringing talk about my wifely duties. I was still too dazed to take it all in. But the full blast of it came to me when I was locked up in a room with my cousin. I had the greatest difficulty trying to understand the fact that he was also my husband.

The first full sentence he said to me was  - "Show me".

Disgusting. I was immobile with shock. "Don't make me yell!" he threatened. I still didn't know what to do. The next thing I knew was how he whispered in my ear, "I know all about your past. Because of you, my parents had to hush up the wedding of their only son!" and then he commanded me to be his "wife". That night was worse than everything else that had preceded it. I still shudder at the thought of how violently I was treated by my own cousin in that room, just to be my husband.

I suffered this abuse for months. For the first few months, I would hold my breath till I got my period and relief would flood through me. I wasn't allowed to interact too much with the outside world, especially my immediate family because my husband and his family were too scared of what I'd do since I was educated enough and they knew that an irreparable damage had been done. I don't know why men do this.

I don't know why they get so aggressive if you don't reciprocate in the way they want you to. But slowly, I was gauging courage every day. To get out of this mess since I fell for it way too easily, like most of us Indian girls do for their parents' honour. I probably just didn't want to be a victim of honour killing.

Five months later, I got the opportunity that I was waiting for. I went to visit my mother and stayed with her for a couple of days. I behaved properly and did not show any signs of discontent. My mother did not suspect anything. By the third night I spent at my mother's place, I had everything prepared. I needed my degree certificate and I had managed to find it, finally.

I had packed a small bag of old clothes and hidden it in a safe place. I ran away with the little money I could find in the house. I left the city where I grew up and went to an alien but beautiful city where most of my friends live, who stood with me in my worst times. I wouldn't have had the courage to leave my house otherwise.

To this day, nobody knows where I live and what I do.

However, I couldn't resist telling my mom using the same tactic she used on me for so many years and she couldn't say anything. Now I am in a friendly city, stringing words of a strange language to make a living. But at least I have my independence and I am realizing the potential that Deepak said I have.

It has been almost two years. I wonder if he is married by now. I haven't looked back ever since and I know they won't come looking for me because of the threatening letter I posted to them with love. I didn't feel the need to end the incestuous relationship that I was forced into, it didn't have a name and yes, I finally accepted it.

Every time I see my friend Nandini and her husband, a strange sorrow tugs at my heart. It could have been my life. The smile that Sudhanshu gets every time he looks at his wife could have been the smile on my husband's face.

Nandini is a happy woman. Perhaps arranged marriage is not a bad thing all the time.

But there is still such a thing as 'consent'.

I am a single 26-year-old South Indian woman who is too terrified to marry again but I can't help but hope that my love will step back into my life or I'll be able to fall in love again and no, I'm not against arranged marriages.

Share this because this should make you angry! She escaped, but the next Indian Bride might not. For that, you have to help.