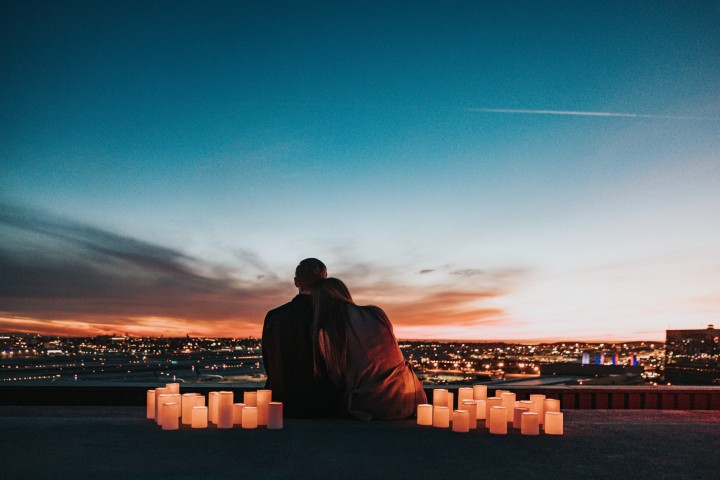 True love at 46.  That morning when he sent me his picture, my immediate reaction was..."you look so much in love"..."I am" came the instant reply.

We were just three days away from meeting and I was counting every hour. It had been only twenty days since I had known this soul who had effortlessly flown into this space with me. Even after being active on Tinder for more than three years and meeting a handful of guys, I had never felt the way I felt for him and that too without meeting. Was it just in my head or was this feeling for real? I wasn't sure but I wanted an answer to this excitement.

"Why can't you come this week?" I wrote him a message out of my eagerness to meet the cause of this feeling I was enjoying so very much. Within the next few hours he got his tickets booked and finalized the hotel.

The last time I had felt so many butterflies in my stomach was when I went on my first date. And that was more than two decades ago. I was feeling like 22 again.

I would not be wrong in saying I was intimidated by his presence when I first saw him at the airport. I had never liked to be around people who were very tall. I haven't grown taller to what I was when I was 13 years old, you see. But definitely, it wasn't just his height but the grandeur that he walked with.

My butterflies dozed off for a bit only to wake up the moment he sat in the car and said "How would you kiss me here in the parking?" My cheeks felt hot. Was I blushing? This man was doing things to me with his words that I could've never imagined anyone do to me at this age or any age.

On the way, he kept reminding me of what he had been asking for the first time we would meet. I still thought he was just playing a prank. As soon as we entered the room, the look in his eyes told me he was serious. Though I wasn't too comfortable I obeyed, as if I was already his slave.

He kissed me at a place no one had ever kissed me. And then turned me over and pulled me into the most passionate kiss I have ever had. I knew I love this guy from that very moment.

Not because of the chemistry that sparked between us in that moment but because I felt his love in my soul. This feeling was real, not just in my head. The next 48 hours were the most beautiful part of my life.

There was something about his touch, his voice and the way he looked at me. He was my 'Eros' and like he told me numerous times "you are mine". It felt we had always belonged to each other.

That night I slept like a baby in his cuddle. Melting in his warmth. Inhaling him with every breath. I knew he was here to stay.

Here's Why Everyone Should Learn How To Save Lives

A Man With A Woman's Heart

We Do Street Plays To Create Awareness: This Is Our Story

How I Discovered My Daughter's Hidden Talent Recently