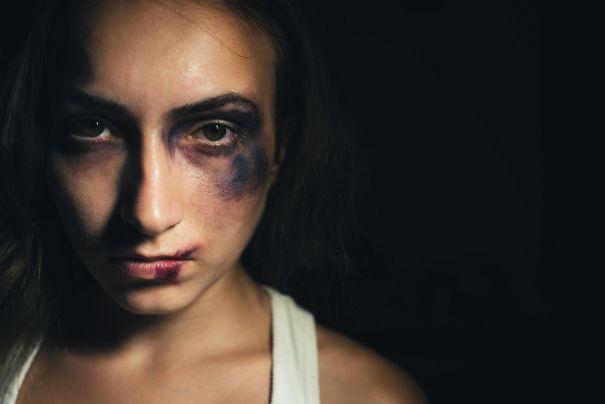 I was sitting in one corner of the hall. I was trembling with fear. I was bleeding. I was in pain and I did not know what more was to come that fateful night. Even today flashes from that day start playing like a movie in my mind.

My mind unknowingly goes back to the series of events that occurred that day before it all began to fall apart.

It had been a bright sunny Sunday afternoon. I was just spending my time in my apartment. I was making a list of all the things that I had to do that day when my phone buzzed. It was his call. I picked up my phone, greeted him with a warm smile and said, "Good morning!"

He sounded disgusted. He was curt when he said, “It’s noon. Tumhari subah abhi hui hai?”  I just shrugged and asked him how he was. He said he was going to get his bike from the service centre. He asked me whether I would like to accompany him.

I looked outside. It was very sunny. So I refused. He persisted. But I still said, “No!” He then started speaking very loudly. I could sense his aggression.

My mind quickly moved on to the next scene that was imprinted in my soul.

I had wanted to throw him out of the door. But I knew I was no match for his strength. I got up and asked him to leave.

I moved towards the door to open it. Within the next few seconds, I found myself on the floor. He had pushed me so quickly and suddenly that I let out an involuntary cry of pain. He was strong - stronger than I could have ever imagined. I could feel my heart thumping very fast. I could feel the terror rising within me. He then pulled me by my hair and dragged me to one corner of the hall. He said, “It’s all going to end soon.”

Strangely enough, I could visualize the rides, the chaat, the golgappas, the fun we had with our friends and the good times we had in the past. I wondered how I had found myself in this kind of a situation now.

I was forced to return to the present. He was standing very close to me and was breathing heavily. He asked them all - the questions that he had for me. I was too hurt to reply. I just nodded to tell him that I didn’t have the answers that he was looking for. My ears fell numb. He had stamped a hard slap on my face. I tried to reach for my phone but he picked it up and kept it out of my reach. I was alone, hurt and in a lot of pain. I had never expected him to do this to me.

I looked at him with disbelief in my eyes. I was angry and felt helpless. I mustered some courage and got up from the corner.

He pushed me down yet again. I ran towards the door of the balcony. He grabbed me by my leg and dragged me to the corner. He then gave me another blow. My head fell straight on the hard cold floor. I could feel my head spinning. The pain stopped after a while. But the tears didn’t. My face felt numb. There was no sensation in it all.

I got up. This time I tried to lock myself in the bathroom. He followed me. I grabbed my phone.

But he didn’t let me make any calls. I begged him. I told him that I needed to call my mother. The call was getting through. I couldn’t stop crying. My mother was concerned. She said, “What happened beta? Why are you crying?”I couldn’t tell her the truth. So I lied. I said, “I am just missing home. That’s all.” Mom said, “Is someone beating you?”

I couldn’t hold myself when I heard those words. I just let out a cry of pain. I didn’t tell her the truth. I just hung up.

He snatched the phone from me. I wasn’t supposed to make any more calls that night. I ran again towards the balcony. I screamed my heart out. He grabbed me by my hair and pinned me to the ground. He pressed his hands against my lips. I could feel his rough hand tearing through my lips. I was choking. He slammed me against the floor and pressed against me. He pinned me to the floor. I couldn’t even scream. Even the slightest movement of my mouth sent an acute wave of pain through my body. I fell still – completely.

A few minutes later, I thought to myself. I couldn’t let something like this happen to me. So I screamed again. The pain was excruciating. But I knew it was more important to get him out of there. I screamed and screamed.

He choked me. He pinned me to the ground and pressed against my lips brutally. He beat me up like as if I was a dead body. There was no life in me. My whole body was bruised. My face was swollen. I was bleeding profusely through my mouth.

He saw me bleeding. He came to me. He tried to look at the damage he had done to me. He sat down and said, “See what you made me do. See how you are bleeding. If only you had given me my answers – I would never have done such a thing to you. I could never hurt you.” He then tried to wipe the blood around my face.

My heart was full of disgust for him now. I resisted.

I got another deathly blow on my face. So I let him wipe the blood. He wiped it gently. I didn’t have the courage to say, “No!” to him or to even look at him. After a few seconds, I finally looked up. I saw him crying. I looked at his face and angrily asked him, “Why are you crying?” He stamped another tight slap on my face and said, “I loved you.”

I didn’t utter a word again. I was crying. I was bleeding. I had lost all hope. I had no energy to fight. I just sat there and cried because I was feeling helpless. Suddenly, I heard a familiar sound outside in the alley. The guards were on their night rounds and they were blowing their whistles. I tried to get up. He slapped me again. I heard the whistle sound getting closer.

I somehow got up. I warned him and said, “The guards are coming. I am going to complain. If you don’t want to be dishonoured, please leave.”

He sat there. He was crying. He looked at me. He didn’t move from where he was sitting.

I opened the front door. I could feel the anger, the disgust and the pain building up. That was the moment I decided that even if I died that day, I would not let him beat me anymore. I warned him again.

He stood up. I could sense something going on in his head. He was moving around like a mad person. He stood by the door. I was about to slam the door on him. Thoughts flitted through my mind randomly. I looked back on our friendship and on the moments that we had shared together. I remembered all the good times that we had shared together. Everything made me feel more miserable now. I could feel the pain piercing through my heart and body.

The guards had gone. He looked at me one last time and said, “I want my answers. I came for my answers. You didn’t give them to me.”

I told him to get out. I tried to close the door on his face.

But he pushed himself into my house again. He grabbed my hand and pushed me on to the floor again. He then grabbed both my hands inside and tried to pull me inside the hall.

I stretched my legs and stuck them against the door to keep it open. I didn’t want to be alone with him again.

I kept struggling and he kept trying to pull me inside. I could feel the skin of my legs peeling. It hurt. The pain was acute. I don’t know what happened after that. He got tired. He wore his sandals, threw me on the floor and rushed out.

He was gone. Finally.

I was left there – bleeding, bruised, hurt and hammered to near death against the cold floor of my apartment. I lay there for a few minutes, trying to accept all that had happened to me just now.

He had been a very dear friend of mine and he had done this to me. I didn’t cry anymore. Every part of my body and my soul had been ripped apart. I lay there in disbelief – in complete helplessness. I tasted the blood that was oozing out of my mouth. I lay there…. I could hear my soul crying loudly. I wanted to scream. I wanted to kill myself that day.

It’s been a few months now. A cold shiver still runs through me whenever I enter my apartment. I have my nightmares every day. I wake up with cold chills suddenly in the middle of the night. I look behind my shoulders every time I am out. All these things have become a part of my life now. Yes, I live in fear every second of my waking hour.

I am scared. But I am fighting my way out of it. Someday, I might win this battle. But I will never forget all that happened that night. I can never ever tell you how exactly it changed my life forever.

What right do we have to resort to physical/mental/emotional abuse when people are unable to/ refuse to live up to our reasonable/unreasonable expectations? Why are we so hell-bent on gaining control over others? Why do we manipulate situations all the time to suit our whims/fancies? It’s such a bloody shame that we do all this and then call ourselves “human beings!” Let’s share this story and learn to say, “NO” to abuse from this extremely brave girl. May her tribe increase!