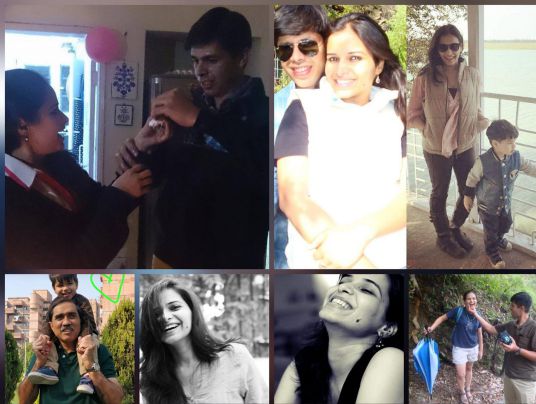 It was in August 2015 that I started looking around for a cozy, cute, sturdy cot for our little bundle of joy. After much deliberation, I did pick one and it was very close to what I had in mind. Perhaps a little bigger than I had thought, but it was still a big tick on my ‘to-do’ list.

Things, however, didn’t go as planned. All the little bits and pieces I had been collecting in the months leading up to the baby’s birth, lay forgotten in the wake of the tumultuous turn my life took on 22 September 2015 – my husband, Major Dhruv Yadav gave up his life on the line of duty.

Our baby came to this world on 15th November 2015, barely 7 weeks after I had lost Dhruv. And when we got home on the 18th, I saw the cot in one corner of the room. It brought back lots of memories, our countless discussions of how we would send it across to Jaisalmer, how it will be placed in our little room, whether the baby will sleep in the cot always or between us. We even had a bet over whether the cot would be reduced to space for dumping stuff. As I put these thoughts aside, I realized how beautiful the cot looked with its little mattress, it's adorable baby bed sheet, and an array of soft toys in full attendance in one corner. And then I saw the string of teddy bears hanging from one end to the other. It was something that Dhruv and I had bought together even before our baby was in the picture.

We were exploring Landour in Mussoorie, singing and strolling our way to Sisters Bazar. The street was narrow and the shops were tiny. I had the urge to explore the quaint market. It was one of the shops where we saw this string of bears made out of blue and pink check cloth. I was pretty excited and I said to Dhruv, “This looks perfect for my room.” He gave me the ‘You are not 13' look, and said, “Let’s pick it up for the baby’s room.” And we did. There it was now brightening up our baby’s cot.

For me, it was Dhruv telling me "I'm around" in his numerous ways always.

The Cot was right next to my bed and had Rehaan’s toys, nappies, sheets, change of clothes. One nap during the day used to take place in the cot. Even though a lot of people insisted that the baby must sleep in the cot, I somehow could never agree to that, I loved him next to me - curled up and cuddled.

Yes, the nights were long but as they say ‘the years are short’. So I had decided that I will make the most out of Rehaan growing up.

In the months to come, the cot was filled with books and toys. Rehaan would look at me and say “Baby jump cot”, a cue for me to place him amongst the stuff cluttering the cot. And after he was done with the jumping, the place was unrecognizable. Oh, but what fun!

On 31st January 2018, I decided to pack up the cot and have something else in place, for all the books and toys. Initially, it seemed like a mundane task to me but as I emptied it one last time and began to dismantle it piece by piece, I did so with a heavy heart. It was a reminder of how fast my little swaddled baby was growing up. It was a reminder to cherish even the most ordinary things in our lives before they are put away or their time is up.

After it was reduced to seven pieces of wood, I even suggested putting it back together and to use it for as long as we could. As my suggestion was knocked back, I began to dust, clean and scrub the piece of furniture that was replacing our cot. I wasn’t feeling too great but as I was fixing things, it dawned upon me that this was the same piece that Dhruv had got made when he was commissioned. He took immense pride in the same because he had designed it and had got it made himself.

There he was, in his numerous ways! Asking me to remember that the end of one thing is the beginning of another. I took a deep breath and smiled.

It’s amazing how we can at all times remind ourselves of the positive side. There is always something that will make your soul light up and it’s right there inside you! The idea is to be aware, cherish and nurture the sparkle.

Just like Surbhi's stories, we are showcasing 6 stories of motherhood coming Sunday, in Mumbai. For more information, go to Story of my Life #MaaHoonNaa 2.0.