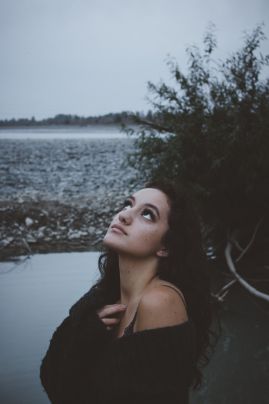 I went to one of India's most popular private engineering colleges. I was just an average student there, got an average job during the placements and started working in Chennai, where I was staying with my Aunt and Uncle. I would see them so much in love and always wanted to have that with my then boyfriend. I wanted to marry him and have kids together. We had been in a long distance relationship for almost three years and we broke up because he wanted me to wait for at least four years before he could even think about marriage.

It had been a year since I had spoken to my ex, I was doing exceptionally well in my average job and was to travel to London for a year, for an assignment. I was so happy and a few days later my parents found the perfect eligible bachelor for me, my future husband. I was over the moon and I was ready to give up on all my aspirations. He was handsome, educated, wanted me to have a career and apart from all this, his parents were a gorgeous couple. The family was forward, modern and after meeting them for the first time, I was blown away.

My to be mom-in-law wore a pair of jeans with a chic top and high heels and being a Marwari, that is forward. I could see myself wearing skirts, jeans, dresses and everything else that I was freely wearing as a single girl.

I thought anyone would be lucky to be married to this guy and into this family. I should have realized it was just too good to be true. The time between our engagement and wedding day just flew. During this time, my fiancé and I fought a lot, made up, met a few times and made out a few times too. I told him a month into the engagement about my past relationship and I told him clearly that if this bothered him then we could call off the wedding, but he was just so perfect and said the perfect things.

He said that my past didn't bother him at all and it was our future that he cared about. I fell even harder for him.

I have thyroid and I told him about that too during one of our conversations and he wasn't bothered by that either. We got married and went on our honeymoon, during which we attend a wedding of one of his cousins. I was exhausted by all the travel, meeting hundreds of new people and trying to remember them. On our first night there, the sangeet was followed by the casino night. After the sangeet, it was already past 12 and we got back to our room and he wanted to go for the casino night and I didn't, after which he said he would go alone and I didn't like that as I wanted to cuddle and sleep with him. He got angry and pushed me on the bed and abused me.

He threatened to call his parents and my parents back home and ask them to take me back. I was scared and didn't want anyone to know about our fight, being married for just 7 days then.

I have been married for a little over two years now and they have been the most tormenting years of my life. A lot of girls write about how life after marriage has been difficult because of their in-laws or their husbands or both and like them I wasn't spared either. I compare my life to getting a 2 and a 7 in a hand of poker, the worst set that one can be dealt with, and the chance of ever winning with such a hand is close to zero. And the chances of me having a happy life is close to zero, too.

Share this story because it is a reminder that sometimes things are too good to be true. Remember, if you ever had to bet on anyone to make you happy, place all your bets on yourself.