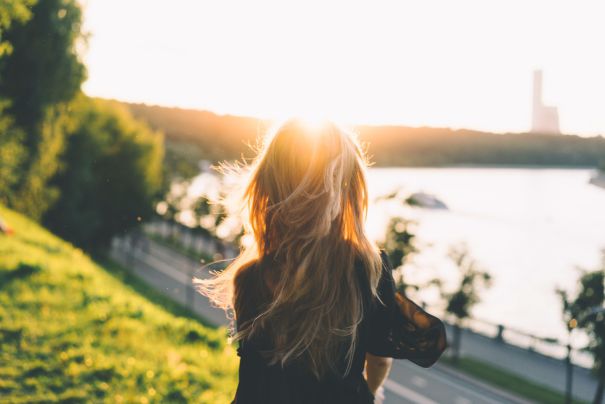 I cannot exactly tell you when it all began- I would like to think I was too blinded by love, or whatever that was- too elated with the notion of somebody worthwhile in pursuit of me.

In hindsight, it seems a bit funny actually, to be so caught up in flattery, and infatuation, that I refused to acknowledge the fact that this could be something so toxic. And so, I cannot tell you when it started- maybe it was always there.

But to me, it definitely were the little things that piled up one over the other like sh**** books that you read halfway through, and then procrastinate until there's an Empire State Building in the corner of your room. You choose to forget about them until they topple over, and scatter on the ground.

The little things- like the way he used to pick out my flaws bit by bit, until he had covered ever inch of my body. My skin was never smooth enough, my hair never the right length or the right cut- I wasn't ever poised enough, not thin enough, not beautiful enough.

Sure, he told me I was smart, and pretty, and intelligent, but I don't think he considered me smart enough to notice the glint in his eye, like he had trouble believing my words. Or maybe they were just mere words to him, maybe intelligence never mattered to him.

I almost wished that he would tell me that I wasn't smart enough because I'm pretty damn sure that if he did, I would have dropped him off like last season's Michael Kors' bag.

I used to think, in the beginning, that maybe this was him- he never sugar-coated, and gave everybody his honest opinion. Maybe honest opinions were supposed to make you feel so small.

I never let compliments get to my head, but insults have a way of probing and getting inside your skin. But to him I was always too sensitive or of course, the classic, "tujhe toh sab offend karta hai (everything seems to offend you)", and it got to the point where I stopped voicing my feelings out loud in the fear of being shut down by some lame a** half-hearted apology and a random insult.

To everybody else outside, it seemed like we were finally getting along, not arguing anymore like we used to, back when we were friends, but little did they know.

I remember how I would fail to elicit a response out of him whenever I showed him one of my poems, unless it was about him. It was like, everything was always supposed to be about him. I got so good at writing about him- twisting his s*** of a personality into beautifully etched words on paper.

I was lying even when I was writing. And I think what infuriates me most was how I started believing in all these lies he fed me. I was constantly living in a state of turmoil and denial.

I think what I hated the most was when he would read one of my compositions, and like an automated response, he would go, "yeah, I've read better", like that was all this was- words, meaningless words. It didn't occur to him that I was penning down my feelings here, and he was comparing my soul to some other poem he had read once.

I find it funny how we broke up so many times, but ended up always coming back together, to the point where I started to believe that I was fated to be with him, this major level douche bag- I wonder how I lived with that idea in my head without choking on air. But, it all had to topple over at some point.

I had it bottled up for so long, God knows it had to go over the brim at some point. And, maybe that is why my penultimate break up with him happened because he didn't properly wish me on my birthday.

He made such a big fuss about being torn and shriveled and broken because of me, but it didn't take him more than a week to get together with another girl.

In retrospect, I kinda feel bad about hating the woman (even when she was an unconsolidated bi***, and hated me with passion only because she couldn't acknowledge the fact that exes can be friends) because the only person who should have been truly despised had to be him.

I think, at first, I was trying not to judge him- not jump to conclusions about him and her, because maybe they were in love, and what business did I have in it, other than wanting him to be happy?  And, perhaps they were, who knows, but that didn't stop him from toying around with my feelings, sending mixed signals my way, telling me he still loved me.

And, maybe that's why if there is one person who needs to be hated more than him, it was me- I could have warned that girl of the impending danger. But I didn't.

I think that's what hurts the most, knowing that I could have prevented another heartbreak that culminated from getting caught up in the crossfires that resulted from our love-hate war. But, they did eventually break up, and it's funny how we got back together, because I would like to think that by this point, I was already holding the lighter that would later burn our bridge down.

I think he just assumed that after he broke up with her, we would get back together, and it was this presumptuous demeanor that finally drove me to hating him.

To him, we were together, but I was too busy avoiding him, ignoring him every step of the way- his one text would drive me insane. It was this hate, combined with the growing paranoia that if he could leave her in just the drop of a hat, what is the guarantee that he wouldn't do it to me too soon.

You may ask, why I didn't end things right after our penultimate break up, but I guess that's what happens when you fall for somebody- the sparks turn into fire without you even realizing, and by the time you smell the smoke, you've already been burnt.

But, by the time, the end began, I was staying only for the sake of staying- waiting it out until he would come home, and I could finish things in person.

But, I think, somewhere along the line, my patience gave in, and I threw every ounce of civility I had decided to maintain, into the trash, and broke up with him over text.  And, f*** you if you think am petty, because I am past the point of caring. God knows that douche bag doesn't deserve anything more than petty.

On days when the memories of us together, laughing, smiling, in love come to mind, I wonder if we were really in love. I would like to believe we were. In spite of everything.

I am not the same person as I was before I got into this relationship, and I'm not trying to be either. I refuse to hold grudges, and the only reason I write this today is because every one of us needs a reminder that love is sometimes not enough.