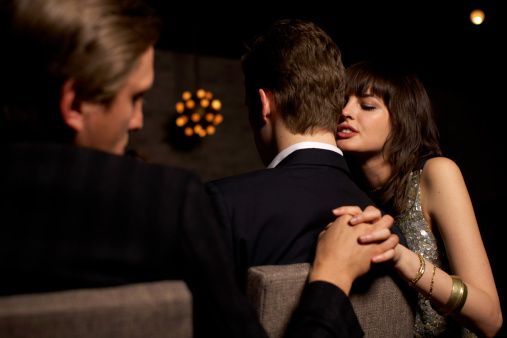 When I first met PB, my marriage had nearly ended and I was going through a difficult time. I was working in a senior position in one of the IT companies in Chandigarh and she was a trainer there; married with a daughter. We started interacting during one of the training session and didn't realize when we started hitting it off. We then went for a movie together and also for uphill drives on her bike.

That was when she told me about her life and how much pain she had been through because her husband had cheated on her and about how she tried to commit suicide and ended up in the hospital. We continued to meet at and off work and watch movies together and hang out. It was all like a dream.

I had finally met someone with whom I could connect and talk for hours together.

I remember, one day we went drinking and she got drunk and couldn't go home. She wanted to go over to my place to sober down. That was the first time I held her. She was tipsy and had trouble walking, so I held her by her waist to prevent her falling down. That night I watched her sleep like a baby, so peacefully, and when she had woken up, we went to grab breakfast before she headed home. The next time we went to watch a movie and have a few drinks, she got drunk again and we went back to my place. On the way there, she spoke to me about making love and I dismissed it, thinking it was the alcohol speaking. I let her rest and when she had awoken, all sobered down, we kissed and made out and eventually ended making love. That day is engraved in my memory and I will never forget it.

After that day, she started opening up more to me and told me how she had been in many meaningless relationships and that she had never told me about them. She told me about how she was in a relationship with my boss and that they were intimate every time he visited CHD. I couldn’t bear the thought of seeing her with him and ended up leaving that job to avoid such a sight.

She shared all the conversations she had had with him and was honest with me about everything.

I finally confessed to her that I love her, and she reciprocated saying the same. Earlier, she had mentioned to me that her marriage had ended and that she was moving out of her house in few days and was searching for a PG somewhere closer to her workplace. I knew it was wrong to be involved with someone’s wife, but she convinced me that her marriage was over and that she was moving out. And I, like a fool, kept believing her.

I then found a job in Bangalore and left the city. During this while, we would talk over the phone and message each other constantly. We did have our share of fights like all normal couples did. But I had started to notice drastic changes in her behaviour. She would spend a lot of time talking to other people and this would often make me angry. Soon it was Karvachauth and she told me she was keeping a fast for me. Moved by this gesture, I decided to fast with her that day and I did. Little did I know then that she was fasting for her husband and my ex-boss. We had a huge fight when I came to know about this and she promised me that she had stopped talking to him. To validate her point, she sent me the screenshot of her conversation with him and I believed her and was pacified.

I booked her ticket to meet me in Bangalore. I cannot express the joy I felt when I was at the airport to receive her. Finally, I could spend time with her for a few days. She told me how she was looking to move to Bangalore in search of a better job. This made me even happier. But I don’t know what came over me later that day, while she was asleep, I checked her phone.

I dread that moment to this day.

She was still talking to my ex-boss and had even slept with him whilst being in a relationship with me; that too, just a few days after I had left CHD. Her call recordings and chat conversations killed me from within. When I confronted her, she didn't say anything and walked off from the hotel room. After a lot of crying and sobbing on the day she was to leave, I told her that we could part ways. She was sad and kept crying all the way back to CHD and for the next few days would call me and cry, asking me to forgive her. I was so blindly in love that I forgave her, little did I know that this was the beginning of a new chapter of betrayal, cheating and hurt.

This is proof that men are as gullible as women when it comes to relationships. Share this story because we must all do away with the stereotypical notion that women are the only victims of folly.