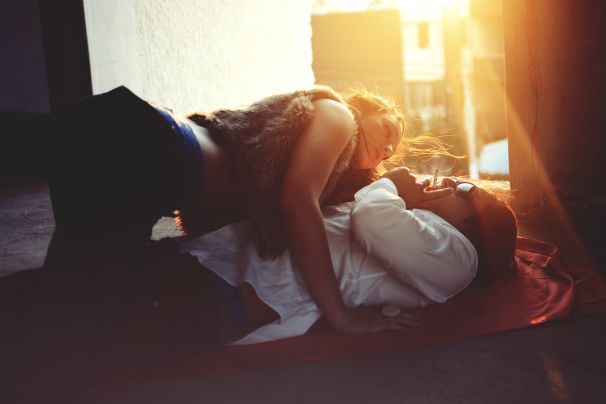 I don't really want to reveal my name. This is for the person whom I loved truly. Many say love happens numerous times but I believe that true love happens only once. That's what happened to me. I used to be a girl who loved every little thing, who always knew how to have fun. I never really felt for somebody but I am a very horny person and I am not ashamed of it. I wasn't like this earlier but I became thirsty for physical love, rather I would say, I was made like this. I had sex at a very young age when I was only fifteen years old and I loved it.

But then I didn't have it until I found the guy for whom I felt love. He changed me into a one-man woman.

I used to smoke up like daily. I have been smoking up since I was in 8th grade. Through a friend of mine, I met the guy, let’s call him Y. So when we met for the first time I thought I wanted to have a fling with him. But seeing him daily made me like him, especially his tattoos. I had noticed from side glances that he would stare at me the whole time. I felt good and special. Day by day, we became closer and I wanted to get physically close to him. I wanted to feel those warm breaths. One day he requested me to dance for him. And I did, a seducing one. Later, our friends went outside as he told them that we had something to talk about privately. After they were gone, he came to the room where I was sitting on the bed and made me lean. He leaned on me.

And we had an intense makeout session that was better than sex. He made me go crazy for sex.

We used to make out daily. And then I finally had sex with him. He said that I am amazing in bed. Yeah, I am, and the reason is him only. He said that only I could make him lose control. I became lusty for him. He did it on purpose. Sex became a daily routine for us. I even had to use I-pill once. Some months passed. We started drifting apart. He started ignoring me. One day, I saw naked pictures of girls with whom he would converse even when we were dating. He would ask for those pictures himself. And then I broke up with him.

I gave everything to him. I loved him both physically and mentally. Later, he said he wanted me back. But it's too late. I am now happy with my husband-to-be :)