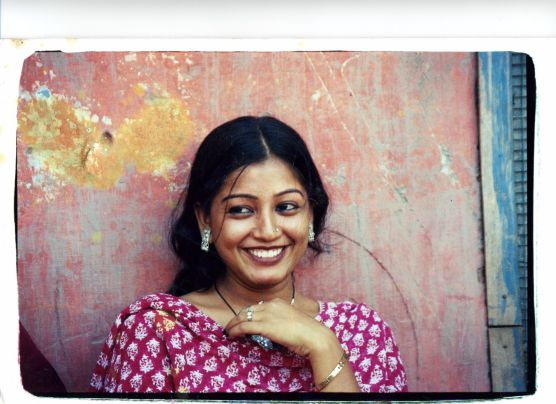 I was making a story on bold women. A women’s day campaign you might say. Let me introduce myself. I am Tanvi, a journalist working for a leading English daily.

It was 3 pm. I drove down to meet Ms. Niharkana Ganguly. Holi, being round the corner, streets of Kolkata were painted red. Even the narrow lanes, unwanted traffic seemed not so bad this sunny afternoon.

After much effort, I could locate the calling bell written "Mrs. Ganguly" under it. Let me tell you, there were at least 20, which might be connected to other rooms of this gigantic house. An old woman opened the door for me. I showed her my identity card and told her about the appointment I had. She took me inside. It was a 10/12 room house approximately. I can not say it was a living room exactly with the presence of a tiny dining table, a 3 seater sofa, a single bed and what nots of a lower middle class household chores.

Niharkana Ganguly offered me a glass of aam panna (a sweet and sour drink made of raw mango) and 2 rosogollas (famous Bengali sweet). I had a late lunch and was not in a mood to eat, but she insisted and fed me like a mother. I noticed her white cotton saree, grey hair, wrinkled skin. She must have been beautiful in her younger days.
Before I started my interview, she looked straight in my eyes and asked, why I had chosen her.

Instead, I smiled and told her that she is an inspiration. The interview began. In 20 minutes, Niharkana Ganguly narrated her story of getting married at a tender age of 14 to a landlord’s son in Faridpur, now in Bangladesh. Life seemed perfect with a caring husband and affectionate in-laws. She was treated like a queen. Her world shattered during the East Pakistan partition of 1947.

Her in-laws got killed in the riot. Some local people helped Nihar escape with her husband and 2 infants in the darkness of the night. She lost her husband at a camp near Dhaka and could never find his trace ever.

20 year old Nihar started her journey of refugee life along with her 2 kids. Acres of properties, a close-nit family seemed was like a dream now. The only thing she could get with herself was some of her ornaments.

At every check post she bribed the police and government officials with those, pleading them not to touch her body.

Her relatives in West Bengal were not very welcoming. She was also not ready to become a burden on anyone. After staying at her brother’s place for sometime, Nihar got an offer to become a model for the painters. Isawrda, a friend of his brother came up with this idea and told her, there is nothing wrong in it as she was contributing towards art.

To save the sinking boat, Nihar agreed. Society had it’s own judgement and verdict. She shifted to a tiny one room flat with her children. Things were not easy. Her 5 year old son took care of his 3 year old sister during fever, while she had to sit in front of the painters for hours. She was made to change her house a few times due to her profession but she could never make people understand that painters respected her.

Her body, covered or bare, was only an object for them to reach their creative goal. Iswarda was the only moral support. He told her, contributing towards art is like worshipping goddess Saraswati. However, the social stigma was persistent.

Life shocked her again when her son graduated and managed to get a job in an engineering firm. Immediately he moved out with his sister as it was shameful for him to stay with a model mother. He had earned respect in the society and did not want his sister to suffer either.

Nihar was stoned. She did not cry, did not utter a word. She confined herself within her room. Few days later when her neighbours admitted her at a government hospital, she was unconscious in high fever. A young lady doctor there connected her to an NGO. She started working there. Life gave her another purpose to live. She still works there.

I was sorting myself to ask her question. She stopped me. With a low but firm voice, she said, “We did not celebrate Women’s Day in our times. Now it’s a craze. You are doing it as it is your job. Once my story is published I will get loads of sympathy. Some club or political party might want to congratulate me for publicity. But I don’t want any of these. Till date I have held my head high and will continue to do so. I do not think I have done anything wrong. When the society will treat me like a normal human being, without discussing my past, when ladies will not gossip about me, gents will not try figuring out how I looked in my youth, I think that will be women’s day. I am not learned like you. But to me, women liberation is to accept her how she is, till she harms anybody.”

I returned to my office with the thought — are we mature enough to celebrate women’s day? The answer is yet to be found.