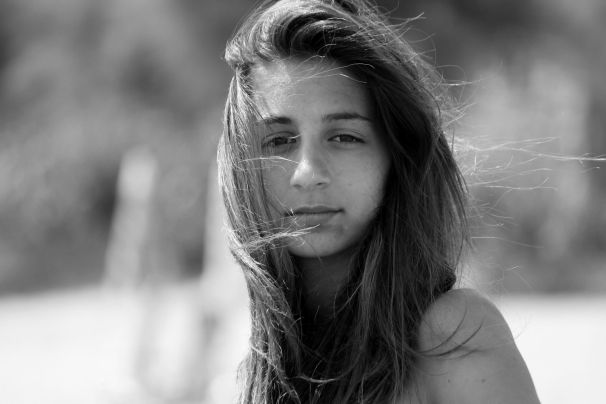 Dear Man (who tried so hard to break her heart),

Hope you remember her. The girl who loved you more than herself, the girl who made you her entire world despite knowing that she was just another contact on your phone who you texted whenever you got tired of your busy life.

May be she was good for your ego, maybe she was some kind of an achievement or a trophy that you could brag about in front of your friends, maybe she was a placeholder, maybe you liked knowing that someone was always available to answer your calls regardless of the time and situation, may be you liked seeing someone trying that hard for you.

There is a whole sea of ‘maybe’s where she is standing right now drowning in her thoughts, questioning her own identity. And she is the only one to be blamed for this because she decided to continue swimming even after hearing the forecast of the coming storm but her mistake was that she considered you as her life guard. You can call her insane for doing what she did, just like what everyone else is saying about her.

Her friends shouted, "Are you blind? He doesn’t love you and never will, why can’t you see what he is doing to you?" Little did they know that she was not blind. In reality, she was a coward, coward enough to accept her mistake.

When you entered her life, she was so terrified to let her guard down, she used to build some kind of a wall around herself so that no one could hurt her, you came and promised her that you will be there to help her and slowly you broke that wall brick by brick. She started to believe that you were her savior.

She finally told you her darkest secrets and let you see her deepest wounds. She told you that she was getting addicted to you, to your presence, to your company, your words and she didn’t want this addiction to turn into love. She suggested that you guys should maintain some distance. But you denied and she trusted you and the timing of her life. You remained at the top of her chatting list. From sweet morning messages to good night texts, you shared every tiny detail of your day with her, you discussed new songs and the lyrics you loved the most, you two talked about sweet nothings all day, all night.

By holding your hand she let you in, without realizing that you were slowly becoming her life. You shouldn't have made her fall for you when you knew that you weren’t going to catch her.

She tried her best to not fall for you but her destiny tried it’s best to make her do exactly that. You always said the right things at the right time till one day she finally realized that you were literally the person she always wanted to be with. With this realization, she switched on her self-destruction mode.

Soon you started changing and she stood there puzzled about your behavior. Your long texts got shorter by the second. Everything about her that you previously admired now irritated the hell out of you. You didn’t have time for her anymore and she started blaming herself, thinking that she may have done something wrong.

She kept waiting day and night to hear from you and you were too busy to hear her break down on the phone.

She kept losing herself every time you didn’t answer her call, every time you chose someone else over her. She was always available for you and that bothered you so you chose your plans over her always. She fought with everyone who said anything bad about you, losing her friends she kept defending you just to be called a "fool" by the end of it all.

Today she is feeling sick and really tired, tired of finding reasons behind everything just to stay with you. You made her believe that she could be 'someone’s sometimes' but could never be ‘someone’s forever’.

The journey of loving you was never easy for her, she kept giving up on her self-respect because you were too stubborn to let go off your ego. Finally the day arrived when her biggest fears turned into reality. You decided to leave her by saying, "It’s my mistake, I am sorry." You know what, your 6 words were enough to tear her apart in a thousand pieces. Nothing can be worse than being called your lover's mistake, that the best thing that ever happened to you is guilty for you. She still wondered if it would have hurt any less had you just left without naming her pure love as some unforgivable sin of yours.

Every night she cried herself to sleep trying to figure out what went wrong, she still blamed herself for everything. She screamed, why wasn’t she good enough, shouted your name out loud but you were nowhere to be seen. You made a soul die. She loved you, she still does but now it’s time for her to close this chapter and burn the entire book.

One thing I can promise you, you will look for her in the people you love. One day she’ll be the one not answering your calls, one day she’ll just scroll down your post and status because they’ll not matter then or maybe she doesn’t even have to do that because you’ll be in her block list. You’ll search for her hand whenever you feel lost. You’ll miss her voice when you badly want someone to listen to you.

One day you’ll miss her, her texts, her attention, her efforts, the way she apologized after every fight even if it was not her mistake because for her there was no point in winning an argument over you. You will miss how she cared, her love because it’s rare what she had offered you.

There are a lot of people like you and the day you’ll meet another you, you’ll want her the same way she did.

One day you’ll hear songs that will make you miss her and you will change it as fast as possible. You’ll regret everything and you'd wish you could apologize. And she’ll not be there looking at her phone screen for hours and hours, waiting for your one text to fix everything.

I promise, you’ll realize it but that will be too late because till then she'd have unloved you with every fibre of her being. She'll walk past you not even noticing your presence. Today she realises her worth, she knows she shouldn't have  to cry herself to sleep. She doesn't deserve it.

Now she’ll not settle for mediocre love, for one-night stands or friends with benefits. No not again. She’s worth so much more. She wants someone to love her the way she loved you. She wants to be the reason for someone to want to be a better person, the best that they can ever be.

Now she knows you can never be that someone. So losing you is not actually a loss for her, she had lost someone who shouldn’t be there in the first place but you have lost someone who did everything to keep you in that place.

I'm sorry for your loss, my friend.

There's no compulsion to make someone believe you're their forever just to make them your 'someone' for sometime. Share this letter with everyone who needs to stop trying hard to break someone's heart.