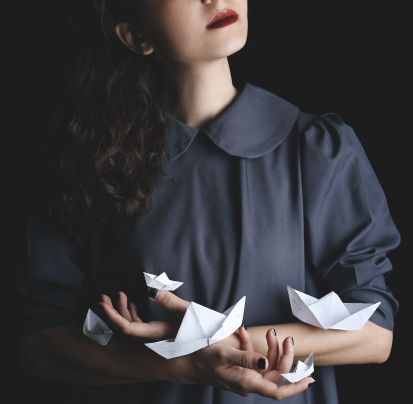 I was the eldest daughter in my family. So I always had to behave in a more mature manner than all my other siblings. Somehow all my younger siblings became my responsibility. I would feel burdened because I had to shoulder this kind of responsibility all the time.

I found a way of doing all that I loved pretty soon. I became a woman at the age of 12, a month before my 13th birthday.

I now started craving for attention from the opposite sex.

I enjoyed flirting and chatting with guys. And I always got positive vibes from all the guys who chatted with me. I knew they enjoyed chatting with me too.

I was around 14 years old when a second cousin of ours started visiting us. He would live with us whenever he visited our hometown because he was getting his house renovated. He would come every now and then to supervise the work going on in his house.  He was a lot older than me – almost in his 30s.

But he was tall, dark and handsome. He had a smile that made me go weak in my knees. His eyes smiled too. The best thing about him was that he had a great sense of humour. He was just my kind of a guy.

I never believed that he would speak to me. I was junior to him by 17 years. But I was a girl and I had my own fair share of dreams too.

We always had problems with our generator. My grandma, this cousin of ours and I would often sit out on the verandah in the dark and watch the night sky which was full of stars. We would chat to our heart’s content. My imagination would run riot at such times. I just loved to listen to him. One day, I needed to go to the loo urgently. There was no electricity so I asked him if I could borrow the torch that he had with him. He obliged.

I don’t know if he did it deliberately, but our hands touched. I felt as if I had got an electric shock.

I blushed in the darkness and scurried to the bathroom quickly with his torch. I thanked him while returning the torch to him. His hand was steady when he took the torch back in his hand and he continued to smoke his cigarette.

I went to bed carrying the sense of his touch in my heart.

I spent the whole of the next day agonizing about whether he had deliberately touched my hand or not. I just knew that I had to find out more about it. I knew I would be taking a risk in order to do this. In case I was wrong we would all be terribly embarrassed about it and there was this extremely strong possibility that I might land into trouble.

The next night, my sister was with me. Again there was no electricity. So I mustered the courage to ask him for his torch again. He handed it over to me. This time there was no touch. I was bitterly disappointed. I went to the bathroom with a lump in my throat and thanked him again while returning the torch to him. He was sitting all alone in the dark night.

Just as I was turning to go back inside, he grabbed my hand and gave it a sweet squeeze. That’s all it took for me to understand that he too felt and thought of me in the same way.

My grandma returned just as he let go of my hand. I was on cloud nine! I just cannot find the right words to describe my happiness. My heart had come alive in a whole new way.

He smiled at me the next morning. It was the same great smile but his eyes had a mischievous and naughty look. He then winked at me. My heart skipped a beat.

We spent many nights like this. He would hold my hand in the verandah and caress it. He would then lovingly squeeze my hands and play with them while my grandma told us stories. I would always go weak in my knees whenever he smiled or winked at me. Our entire family and extended family were always around us all through the day and night. So we were never able to spend more than a few moments alone. Our conversations too were restricted.

One day we got an opportunity to spend some time alone. It had started raining and none of our clothes had dried properly. So I was hanging them around the house so that they would dry under the fan during the night. He came in and asked me what I was doing. It was pretty evident. But I understood that he just wanted to initiate a conversation with me. So I told him why I was doing what I was doing.

Before I could even finish my sentence, he suddenly asked me whether I liked anybody in particular. I was taken aback and blushed. He smiled that same killer smile again. He said he wondered if I was involved with anyone. I shook my head. I was struggling to fold a saree at that time so he helped me fold it. He said he just wanted to make sure there was no one else in my life at that time. I handed him the end of the saree that I was holding in my hand.

And he pulled me into his arms and gave me a tender sweet kiss.

I was absolutely surprised by it because I was not expecting this at all. I felt as if I was in dreamland.

It was our first kiss and he had initiated it with such ease!

He pulled away first and smiled at me again. He then skipped out of sight within a heartbeat. My heart was pounding in my ears.

I felt dizzy with glee.

I knew this was the beginning of our romance.

Read the next part here: I Loved Him But I Knew That I Could Never Be The Other Woman In His Life

Do share this story if you too feel that such special experiences can really bring a smile on our faces all through our lives. Time can change many things in our lives. We may not have the same feelings for the same person a few years later. But we will always cherish these experiences. Such precious memories fill our souls with love. Always.