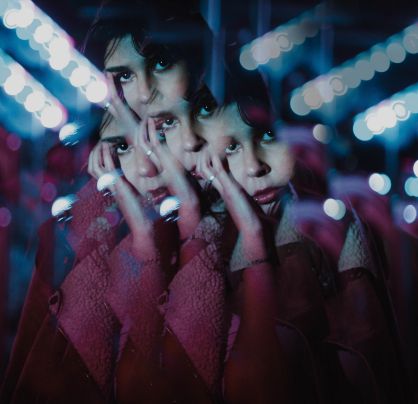 I saw them together again today. I don’t remember where I saw them or how exactly I met them. I think I met them only a few days back. I checked again to confirm if I was right. It was him and he was with her. I remembered the times I had shared with him. It was now almost a year since we had broken up.

I had not yet moved on. There was no one else in my life as yet. But I had made my peace with our broken relationship.

It had been a dirty separation because a third person had entered our relationship. I still remember how devastated I had felt when I came to know about it. It had eaten me up completely. I remember how I had first lost weight and then gained weight.

I still remembered crying my soul out. An empty feeling had plagued my heart at that time. I remembered the days when I had wanted to die out of happiness when we were together. But now I no longer knew what it meant to be content and secure.

I brought my heart and my mind back to the present. I saw them hanging out with each other again. They have moved in together. The girl was pretty average in looks but had a beautiful feeling around her. She looked like a calm girl. Like him, she too did not speak too much. She had freckles on her nose and this made her look cute.

I seemed to be living in a daze these days because I did not remember how we decided to meet today. But here we were – sitting together. He had already told me that she didn’t know that we had broken up with each other earlier.

He introduced me to her as an acquaintance. I was okay with that.

She smiled at me and gave me a bag. There was something in it for me. I didn’t understand why she was giving me a gift but I accepted it. We started talking. All of us were talking. And I kept slipping in things about him in our conversations. These were very personal details. I knew I was wrong in doing this so I became very careful about what I was disclosing.

It ripped my heart to see them together like that. But I put on a brave face in front of them. I remembered the day he had asked me for forgiveness. I had promised him that I would move on. After all, it was not his fault that I still loved him.

We promised to meet each other again the next day. And this time we met at their place. It was a small place. It had a room and a kitchen. Their bedroom spoke of their intimacy in a subtle manner. I had the urge to ask him if he still slept in the same way.

I smiled without knowing that I was smiling.

His girl called me inside. She then whispered and said,”I know you. I know who you are. I know what you shared and what you have lost. I know all the crazy things that you did together.”

“I can see the love that you still have for him in your eyes. I know you are still searching for him.”

I looked at her. I was terrified. I couldn’t understand how she could remain so calm despite knowing so much about our past. Her eyes had a playful twinkle in them.

And suddenly I did not know whether she was revering my pain or mocking me.

He then came into the room and wrapped his arms around her. Then she said, “I am expecting. But have no fears. I will not lose the child. He kissed her when she gave him the news. Suddenly I felt like throwing up. I felt angry. The pain that I felt was indefinable. I felt suffocated.

I remembered the lone trip that I had taken to the gynecologist. He had refused to let me go ahead with my pregnancy.

The memories were so painful that I just blanked out for a while. I could feel the rage building up within me. I felt like destroying everything around me. I just wanted to shatter every single thing in their house. But I could also sense their calmness.

I felt as if they they knew what I was going through but were simply staring at me with amusement. I suddenly felt like a clown who was giving them some kind of mild entertainment.

And I suddenly woke up with a startle. I was completely drenched in sweat. It was 5 a.m. and I had been dreaming. I could still feel my heart racing rapidly. I remembered every detail and the pain seared through my heart. I remembered meeting the new girl in his life the night before. I remembered the good friendly time that we had together.

He had apologized to me again and clarified things to his new girl again in front of me. He had told her that he did not have even an ounce of feeling for me anymore.

But I knew that I still loved him. I know we had separated in a very ugly manner. I looked down at my abnormal figure. I realized that I had an abnormal figure because I was stress eating now. I looked around my house now. It looked very pathetic to me after he left. I sat down with my head in my hands.

I made a promise to myself. I was determined not to feel all that I had experienced in my dream. I was going to become a better version of myself. I had to leave my old self behind with him. I had to forget his smile – his sweet smile which had melted my heart on the first day that I met him.

But my heart had a will of its own. It refused to listen to my mind. I got up from my bed in a trance. I looked at myself in the mirror. I thought of my parents and my brothers. Then I just followed the dictates of my heart. I walked out. I filled a bucket of water. I made a drink for myself. I had my drink and then put my head in the bucket after taking one last breath of air. I was sure that this would be my last breath.

When we experience extreme emotional agony we automatically remember what our seniors said. We start chanting. We start praying. To any God. To all Gods. We are enveloped with a sense of peace immediately. Let's allow the moment to pass. Let's allow time to heal us. Let's learn to nurture our faith in ourselves by connecting to a higher force regularly. Let’s share this story and light up this young woman’s life with hope. Let’s all pray for her well-being.

Also Found in Love , Relationships , heartbreak , pregnancy , the other woman .