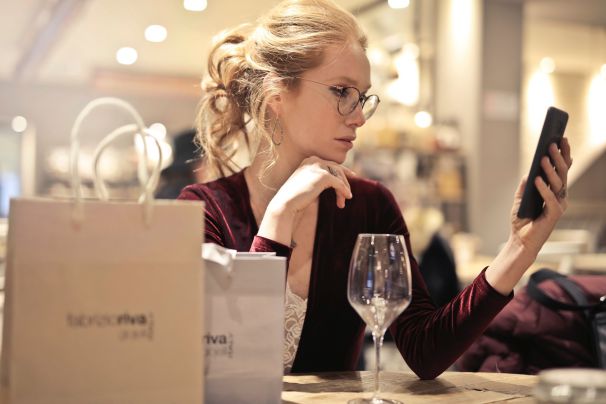 I still clearly remember that beautiful November evening. I had opened my account on Facebook that day. I was hesitant to put up my display picture and was thinking about it for a long while.

I am an introvert and I didn’t really want to show off my pretty face on all these social networking sites. But I have always had this desire to live my life like all those hot gorgeous women.

I am a lecturer in a reputed college. So I guess I was thinking quite seriously about whether I should put up my display picture there. It was against my work ethics too. But I decided to follow my heart just this once and finally put up a really cute display picture on my account.

I wanted all the people on the internet to see my face and appreciate me. I wanted nothing more than appreciation – seriously!

I didn’t open my account for a few days after I put up the picture. But when I opened my Facebook account, I found a friend request along with a message which said, "Hey! Can we be friends?" I went through his profile. He seemed to be a twenty-three or twenty-four-year-old guy. He was tall with an average build. He had strong arms, a wheatish complexion and a dimpled smile. He was cleanly shaven. I don’t like clean shaven guys. I knew he was 3 – 4 years younger than me.

I have this habit of scrutinizing things and I decided that I was not interested in him. After all, he was just a young college going lad and I was a lecturer.

I taught guys his age. I am a strict teacher and no male student has ever dared to take any liberties with me. So, I rejected his request saying that I was not interested in him. He replied and said, "OK. No pushing around! I just couldn't resist being friends with such a cute girl." I said, "Girl? No. I am a woman. I am a 27-year-old assistant professor." He was a little zapped by this. But he said, “No way. You don’t look like it.” And that was the beginning of our conversation.

I don’t remember exactly how long it took him to win over my confidence but I do know that he eventually succeeded in getting what he wanted. I ended up accepting his request.

I was lonely and new in the city. I wanted to discuss my fears and insecurities with someone and I realized that I needed a friend like him. We started chatting frequently. In the beginning, our chats were friendly but slowly they started becoming flirtatious. I enjoyed chatting with him.

I knew I was getting hooked to him.

One day he asked me to video chat with him. He said he wanted to see me. We started video chatting quite often after this. A few days after this, I got a friend request from a guy who seemed to be his classmate. When I told him about it, he immediately asked me to delete his request. I followed his instructions after which he told me that the guy was a lecher. He said he might end up harassing me.

Wow! I was touched because I thought he really cared a lot for me.

Our relationship slowly turned into a romantic one. We would talk and video chat for long hours in the night. I felt really very happy in this phase.

But I doubted if anything good would materialize out of our relationship.

I was older than him and we had to factor in our cultural differences too. We lived in different cities and I had never seen him in person so far.

But I continued with our relationship because I somehow believed that unusual stories too would work out well in reality.

I knew I was a diehard romantic. I loved it when he pampered me so much. He always said that he would ensure that I never cried. Later on, he told me that he was an aspiring actor.

He would put up pictures from his portfolio on Facebook and I would ‘like’ and comment on all of them. I slowly realized that I was not the only one who ‘liked’ his pictures regularly. There were several other girls who did the same thing. I noticed that one particular girl also ‘liked’ and commented on all his pictures.

I was curious about this so I once asked him why he had so many female friends.

He said, “They are just followers!” I then realized that he was either online with me or on the phone with me all through the day. So it was quite obvious that there could be no other woman in his life. I shook my head and thought I was really being very silly to think like this.

One night, we were talking on the phone when suddenly his chats became sexual in nature. I did not mind it. I knew this is what both of us wanted because our relationship had now become mature. So that night we had phone sex. I was 27 but that day that guy taught me so many new things. We did the same thing the next night too. But it never ever happened after that.

Suddenly he just started avoiding me. He stopped picking up my calls and did not reply to my messages.

He picked up my call just once and said he was shifting from his current home and that is why he was so busy. That was the last chat I had with him. I called him and messaged him several times after that. He would see the messages but would not reply. I noticed that he continued with his practice of uploading his pictures on Facebook. After a few days, I saw that he had updated his relationship status on Facebook.

He was now in a relationship with that very girl who would ‘like’ and comment regularly (like me) on his pictures. I ‘unfriended’ him on Facebook and blocked him on other sites too. But not once did he reply or express any kind of emotion when I did this. I sent him several abusive messages and emails but he remained silent.

A few days later, he deleted his old Facebook account and created a new one. All his old girls were now gone from his profile except that girl. He looked like a completely different person now. It looked like he had developed an interest in poetry and blogging now.

I would read his blogs about ‘love’ and a ‘broken heart’ and laugh out loudly.

I was a broken person when he left me. I felt guilty for falling for a guy like him. I could not face myself. I wondered how I had fallen for an immature college going, boy.

It took me a while to get over him but I don’t repent anything now.

I had loved him. He has given me some beautiful memories. He noticed several tiny details about me and I still cherish all these things.

Life is not perfect. Only when we interact with such people will we make mistakes. And only when we make mistakes will we learn from them. I have decided to retain all our happy memories. But I continue to look for answers to the questions that haunt me.

Sometimes we have to invest in a relationship – physically, mentally and emotionally – to make it work. At other times, even our best efforts to make it work prove to be futile. We struggle with our relationships because we don’t know when to invest and when to let go of a bond. Let’s learn not to cling to people who have moved on with their lives. Let’s share this mature woman’s story and learn to cherish the special moments in all our bonds.