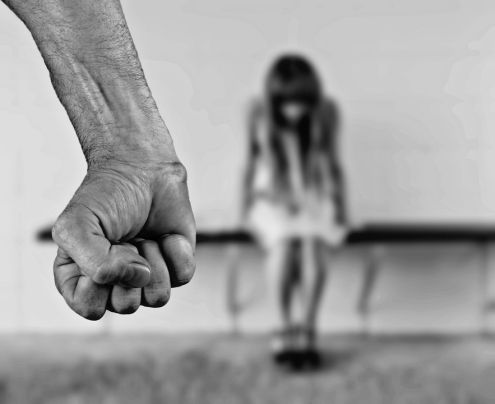 I am a girl and even go through hormonal changes such just like boys. I have had many boyfriends but it was always just casual fun with no physical intimacy. Ok, there WAS a time when I and one of my boyfriends made out. As luck would have it, I was caught by my sister so I had to stop seeing him.

But then, the guy who was going to change my life into hell entered the picture.

I had started liking him because I had heard nice things about him from my friend's friends and some other folks. He was kinda popular in our area and also had a nice personality. He was the guy every girl would dream of. We got casually introduced to each other at one of those social gatherings. We got talking and within a month or so we were in a relationship! He had told me about his ex who had cheated on him who he left. To be truthful to him, I told him that I had boyfriends in the past and also that I made out with one of those guys. He didn’t say much at that time.

Another month passed and our relationship was going well until I started noticing the little things that made me realize that I had made a terrible mistake by being with this guy. He used to get angry about the tiniest things like if I was able to pick up his calls or if it took me a little longer than usual to reply to his Whatsapp message. He started doubting me even if I went out to get groceries for home. He never allowed me to leave the house. He kept track of everything I did. Where I would go, What I would do, Everything. My social life was over as he took all that away from me.

Things took a dark turn as he started beating me. He would say that he was hearing bad things about me from his friends. Because I had told him about my past boyfriends he had started calling me a slut and a lot worse. He abused me physically and mentally.

He alienated me away from my friends and anybody who could support me. He wouldn’t even spare my family and spoke about them in a manner that I can’t write here. I  was deep in depression. His mood swings meant that he also claimed to love me very much. But he fought with me each day and insulted me in front of people and also forced me to sleep with him. I had lost my virginity with him in a very unpleasant.

I had become like a living doll to him to do whatever he pleases with. He would try and get physical and whenever and wherever he felt like it. When I tried to stop him, he claimed that I was cheating on him and hit me. I was in a forcible relationship where I felt trapped, humiliated and abused. This went on for a year and a half. Then, One day, a thought struck me and I started talking to one of his friends secretly to get to know about him. Discover his past and everything. I came to know then that his ex had never cheated on him he did the same thing with her as he was doing with me. Slowly, all his secrets were tumbling out.

So I planned my escape plan to leave him. I had tried before to leave him but his physical and mental hold on me was too strong. He had said that what he was doing was for my good so that society would treat me well. I had come to realize that his views on relationships were very regressive and cruel for reasons I still don’t understand. I had no courage earlier. But this time, it was different.

Because of him, I had failed as a daughter, as a friend, as a sister and as a human being. I had even flunked my 12th standard exams! But now, I decided to pursue my academics and career seriously and ignore him. And that’s exactly what I did.

I blocked his calls and messages. I changed my email id, My FB account and anything he could use to contact me. I blocked him out of life and I didn’t go out of the house for over a month. He tried to contact me through friends but I had told them of my decision as well and all my friends supported me. And Just like that, suddenly it all stopped and I had nobody to abuse me anymore.

I had suffered enough but it was all in the past and the only option left for me was to look forward. It’s been 2 whole years now since I lost contact with him. I have been living in Mumbai with my parents and my sister and now, I am an artist. I am a survivor

Guys if u think there is something wrong with the guy leave as soon as possible don't be emotional for that you all deserve better. Even if u had slept with a guy or had many boyfriends that don't make you a bad girl till the time you are honest. Be proud of yourself, stay happy and don't fall into something which is not meant for you. And yes u can make boyfriends till the time you are comfortable with one. But just be sure that guy loves you and is capable of your love to.

GIRLS WE ARE EQUAL TO BOYS LET PEOPLE THINK WHAT THEY WANT TO THINK YOU KNOW YOURSELF BETTER THEN ANYBODY IN THIS WORLD. TRUST YOURSELF AND ALWAYS BE HAPPY.

If you think there is something wrong with your relationship, leave as soon as possible. Don't be emotional because you deserve better. Be honest with yourself and don't be ashamed of your past.

Be proud of yourself, stay happy. Comfort with the person you are with is a very important thing. so seek that. Just be sure that your partner loves you and is also worthy of your love. GIRLS, WE ARE EQUAL TO BOYS. LET PEOPLE THINK WHAT THEY WANT TO THINK. YOU KNOW YOURSELF BETTER THEN ANYBODY IN THIS WORLD. TRUST YOURSELF WITH RESPECT AND ALWAYS BE HAPPY.

People often wonder why the abused partner in a relationship doesn't just leave. It's got to be easy, right? Hardly. In these relationships, the abuser often does their best to strip away any self esteem and independent thought the other person has. The victims often feel themselves attached or dependant on the abuser and the cycle of abuse continues.

To escape such a situation takes courage and the story of the author is brave and commendable. Share This Story to help lend strength to other victims of abusive relationships