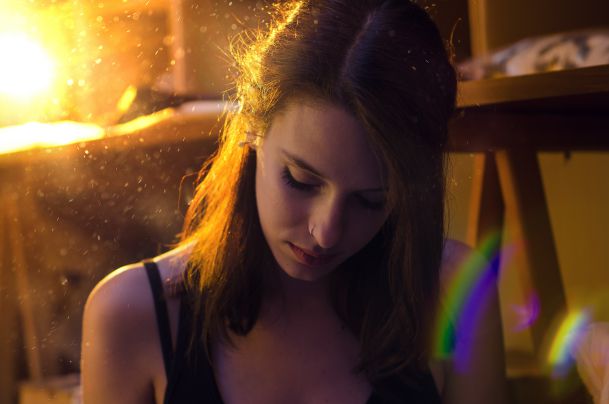 I was listening to songs while walking on the way back to my flat, and a thought occurred to me, that people always need company when they travel, whether it is in the car or trains or even while walking, but for me, it’s the most learned time I spend. Sometimes I look at people around me and just wonder. I have realized something profound:

Each passer-by is living a life as vivid and complex as my own—populated with their own ambitions, friends, routines, worries and inherited craziness, resulting in their own individually epic story that parallelly continues, around me, like an anthill sprawling deep underground, with elaborate passageway to thousands of other lives that I will never know existed and some in which, I might appear only at once, as an extra – maybe sipping a cup of coffee somewhere in the background, or as a blur of traffic on the road, or even as a spec of light from a window at dusk.

And I reached home with this thought. I kept my bag down on the bed and rushed to the toilet because I had to pee badly, then I heard a ping on my phone. I came out and saw a text message: “Who is the guy in the DP? You have a boyfriend and you didn’t even tell me? I mean this is the most exciting thing for you!” One of my good friends had texted this with a laughing smiley. It was supposed to be funny, but I didn’t feel like it, so I called him up.

Usually, I hate talking on the phone and I rather prefer texting but this was way beyond me.

“Hey,” he said, as soon as he answered. And I didn’t even say “Hey”, and asked him, “Why did you think he was my boyfriend? Because he held me by the waist in the photo or the fact that he is standing so close to me? I want to know what made you so sure that he is my boyfriend without even having the courtesy to ask me first?” “Hey it was just for fun that I asked and I didn’t know it was such a big deal, I Apo…” I interrupted him in between, “No, no. I want to know what if I smile at you or let you hug me or touch me by the waist or wink at you or share sex jokes with you, does this give you guys any type of signal that you are free to think that you can get into my pants? If I can make a sex joke with you, I am ready to have sex with you? I want to know what type of signal am I sending out, that makes such guys fall for me who just want one thing out of me.

And what do you mean by ‘this must be exciting for you’, like I have no other excitement in my life other than to celebrate the fact that finally I have a guy in my life? I mean, why is the world around me so obsessed with the fact that I don’t have a boyfriend, or I never had one?

Why is it so surprising for people when I say that I have spent my twenty-one years of life without ever getting into in a relationship?

I mean this idea of finding a perfect love life or a match seems absurd to me. The idea that we can only be complete with another person that the society puts upon you, is pure evil to me. I think you are complete with yourself, a lover just fulfils a part of your need to be with someone. Maybe I am an old soul who does not want to believe in the idea of a time-pass relationship or just entering one for the sake of it, but I’d rather be happy on my own instead of sitting with someone with whom I feel lonely. I cannot have someone in my life 24/7, just like that. I will suffocate. I mean you like to have the idea of romance and hope with you but when you have been screwed over, time and again, you forget about all your delusional ideas. I cannot even say ‘screwed over’ because maybe it is my fault that I am emotional or care or give a fuck. Maybe I have been heartbroken too many times and I always come back, so from now on, I don’t make an effort. I know the phrase that says ‘don’t perceive everyone from the same angle’, but really these are just words. I am a human being and the most obvious response I have for pain, is to never try, to not get into things. Love and reality are contradictory to me now.

Every human being is made with such intricately beautiful details, that if one loses someone, they just can’t be replaced. What is lost, is lost.” I finish and sigh into the phone.

“Hey, breathe you know, can I say something now? I am just happy to hear your voice you know, even If you sound like a maniac-depressive person, I didn’t mean to hurt you in any way, but I guess when you are going through rough times, a small thing can also instigate you. I did not know anything about all this, I just saw your DP and I thought you were happy and you always were the kind of person who was romantic and wanted to love and be loved. What happened?” He asked. “Well, I guess life happened.” I said and laughed into the phone. “I am also happy to hear your voice after a long time, I am sorry for lashing out but maybe I just wanted to let it all out.

I pretend to be detached but I feel nothing, I feel no excitement, or pain or even bitterness. Most of the time, I don’t even know what I am feeling. I guess memories should be there, but just without the past they carry.” I laughed out loud.

“I guess the whole concept of profile pictures or these social media stories, is to show other people how much we are enjoying life. Whether we are or not, we don’t know ourselves.

I think now, that magic in this world only exists in the moment of understanding someone, sharing something with each other. I think love should happen with someone you know everything about, things like how he/she does their hair, or what they love wearing or eating or knowing the exact made-up story or lie they are going to tell in a particular situation.

I think that, we have lost the concept of love because, for something as pure as love itself, why do we need to attach the prefix “true” before it?”

“Hmmm maybe you are right,” he said. “Don’t give up hope and wait for things to turn around. And if you feel like blaming yourself for why some bastards behave with you, in a certain manner, don’t. It is not you. Somewhere there is something wrong with the majority of our gender’s behaviours, that has led you to believe this.”

I reply, “I know you all are not assholes. Some of you are known for the respect and broad mentality you have for girls. But if it happens again and again with someone, you tend to draw yourself towards this illogical thinking. Because, hey, I am only human.”

All the old souls in the house, share this story if you can relate.