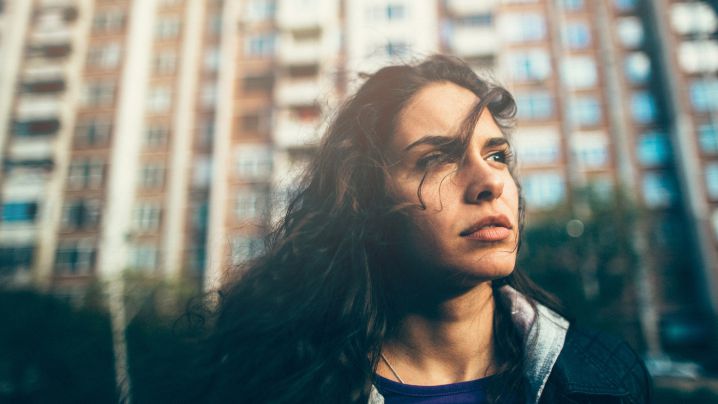 I was born into a lower-middle-class family but we were a very happy family. I have an elder brother. We faced a lot of financial hurdles. But with the help of some good-hearted people, I somehow managed to do my master's degree. I was the only girl in my class who belonged to this kind of a background. The girls in my class treated me very differently.

I would get deeply hurt when they did such things but these painful memories have faded over time.

I managed to get a job too. I wanted to do research and pursue my doctorate but I couldn’t do this. My family thought that it would be difficult to find a groom who matched my qualifications.

But I was happy because I now had a dream job.

My parents then found a match for me. After the engagement, we had six months to get to know each other. We would talk to each other over the phone because I was living in another state at that time.

I always had a feeling that something was not quite right in this relationship.  But I brushed aside all my doubts and got married to him.

We went to a nice place for our honeymoon. Everything was perfect in our lives till then. But after I returned from my honeymoon I got the biggest shock of my life.

My father-in-law said that I should give him my entire salary every month.

He knew we were not very financially sound. I had taken out a loan before getting married. He spoke to me very harshly and used bad words because I had taken a loan in my name. We had been married only for a week when all this happened. My husband did not utter a single word at that time nor did he stand up for me. It was an emotionally draining experience.

I felt very bad and was heartbroken to see all this happening soon after the wedding. I told them that I will not give them any money because they were treating me like this. So they stopped giving me food.

We had been through several rough patches before I got married but none of us had ever slept on an empty stomach.

My mother-in-law would keep picking on me and we ended up fighting all day and night. I started choking in this kind of an atmosphere.

But I refused to pay attention to their tantrums.

So they called my parents early in the morning one day and started narrating all that was happening in the house. My in-laws then called them to their house to settle the matter. Both our families started arguing with one another. His parents started accusing my family members and my brother’s family members too. Finally, my family decided to relent and asked them to give me some time to recover from this shock.

My husband did not utter a single word when all this was happening. He was quietly watching the whole thing and pretended as if all this did not matter to him.

He then said that it was a norm in their family for both sons to hand over all the money that they earned to their father. And whenever they wanted some money to meet their daily expenses or even if they wanted some money for a haircut they had to ask their father for money and give him some time to fulfill their request. They then made me show them all my financial statements and asked me to disclose my assets.

But they wanted me to work because their son was not making enough money to run the house as yet.

All this physical and emotional turmoil was becoming too much for me to bear. I ended up getting into trouble with my job. I was being manipulated at home.

Sometimes I just wanted someone to listen to me and give me some emotional support. But I had no one with me at that time.

I ended up getting a low rating for my work and was treated badly by teammates too. I don't blame them at all. A year later I convinced my husband to move from the joint family. It was as if we were eloping from the house. No one came to help us settle into our new house.

But I didn’t bother. I spent all my savings to get all the household items for our house. My husband did not give me a single penny.

He was still emotionally connected to his family and I was tired of trying to get his attention. He would drop me to my office and pick me up from my office every day. One day he couldn’t come to pick me up. I told him that I will reach home by myself. It is difficult to find a share auto near our office but that day I was lucky enough to find one. I asked the auto driver to drop me to a central point. I had to take another share auto to reach my house.

But he did not believe me.

I was devastated. I told him I couldn’t bear all this. I was willing to move out of this relationship because there was no trust in it. I called my father and told him about all that had happened between us that day.

My father just asked me to be patient with him.

My husband started shouting at me and asked me how I could ride with someone else. He made me promise that I was not lying and asked me to confirm that I had come in a share auto. Then he started fighting with me over silly things. He started finding fault with my cooking and the way I dried the clothes.

I started getting upset too now.

I told him it would be better we parted ways rather than suffer like this. Both of us were suffering. He immediately called his parents to settle the matter. I said there was no need for him to do such things. I told him I would go away if he did this. But he called my parents too. Both sets of parents came to my house and started discussing the matter.

His mother told him that I was wrong. She started referring to all the messages that I had shared with my husband when we had courted each other. She also said that if I had taken a ride with someone else today, then perhaps tomorrow I might elope with someone else.

My father in law said that I should always behave the way his son wanted me to behave.  How could my father in law even think of saying this to his daughter-in-law? I just couldn’t tolerate all this anymore. I started fighting with him.

I told him that his own wife behaved badly.

I told him how she would stand outside our bedroom and listen to our conversations. I told him that his elder daughter-in-law too had the same complaint.

My husband then told me to go back to my parents’ house. I told him that I will go whenever I feel like going there.

I went to my parents’ house the next day but when I called him to inform him about it he never picked up my call. So I just informed his mother about it and left it at that. I told my parents that I didn’t want to go ahead with this kind of a relationship anymore.

But they are trying to convince me to go back to him. I feel as if I don’t have a home of my own to stay in. One of my husband’s colleagues got to know of this incident and told him that he is making a big mistake in his life by not being with his wife. He then called his parents and asked them to call up my parents and ask them to send me home. His parents called up my mom and said that they will inform all their relatives if I did not return home.

My mother told them that they could not do this because we both had to decide what we wanted to do with our lives.

He came to pick me up after that but he never apologized for the remark that he had made the other day.

My family said that I will feel secure if I maintain my relationship with me. They asked me to give him a second chance. So I gave in.

Even today, whenever I feel stressed out, my stomach starts aching. I even had to get admitted to a hospital once for this. But the doctor said that this pain is due to the stress that I am experiencing.

He asked me to face the challenges in my life calmly and advised me to take care of myself properly so that I could recover completely. My husband has changed his ways a little.

I still face a lot of emotional abuse from his family. That is why I am not conceiving. How can they expect me to conceive when there is no emotional connection between my husband and me? When I discuss these things with my husband he doesn’t understand my feelings. So now I have just decided to brush off all these things and be strong.

I am just about able to manage things in my life now. I don’t listen when he talks to his family. I feel I am still leading a lonely life but I have become stronger as a person.

I am just living with him. But I have just one question about our relationship. Is this guy still with me because he feels stressed by society? Or is he with me for my money? His money is still safe with his parents. I don’t know whether to trust him or not. He still listens to his parents. Their first daughter-in-law too got divorced because they treated her in the same manner.

Let’s give ourselves a lot of mental and emotional space to discover our own selves and our partners after getting married. Perhaps we know what we expect from ourselves and from our loved ones only after being married for a long time. We will then surely learn to create our own happy space. Let’s share this story because all a woman yearns for is love and her own special place in her marital home. She deserves the love that she earns for herself.