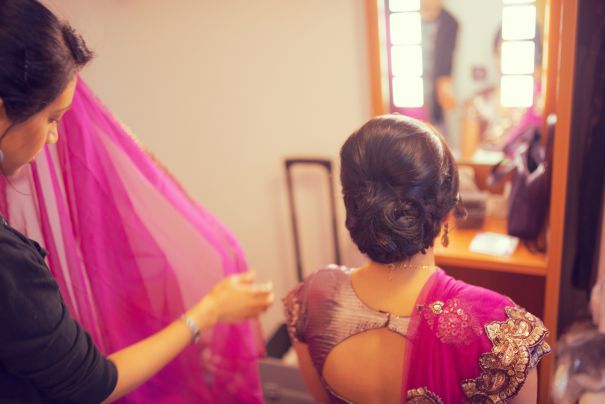 We live in a society where accepting the idea of a life partner through arranged marriages is easy to digest, in fact is often promoted as the next step to being a ‘responsible adult’ who makes their parents proud. I also accepted this thought, without giving it too much of a thought.

But can we do with this thing called LOVE?

I met him at my work place, and cliché as it may seem, it was love at first sight. I didn’t believe in clichés back then, in fact, we both didn’t. But our beliefs didn’t matter, in matters that the heart couldn't resist. We quickly became friends and he started asking me out ever so often. We spent all our time together. He’d pick me up on the way to work, drop me home at night; we spent all our lunches side by side and hung out in the evenings after work. So when he asked for my hand in marriage, you can imagine my joy!

Yet the fear of breaking the news to my parents bothered me. I repeatedly informed him about my family and how much they will disagree for this arrangement. But each time I spoke about it, he would quieten me down and insisted that he will speak to my dad and convince him that he was the right man for me. His confidence coupled with his fear of losing me was so evident in his expressions, that I couldn’t help but not trust his words.

I gave in and decided to introduce him to my family, but just as it was about to happen, he broke the news of him travelling to the United States of America for a work assignment. I was really happy for him, yet the burden of a long term relationship weighed heavy on me. I didn’t want to stop him either. I knew this was a one time opportunity, which could change our lives forever.

When the day of his departure arrived, I was right by his side at the airport. That vision of him leaving me behind for the new life is still fresh in my mind. He left but I couldn’t stop crying. Nights turned to days and I could not stop myself from missing him terribly. So instead, I decided not to moan, and focus on our bright future together.

But every time I discussed our future together, he’d start an argument on how we should proceed with things. He would give me reasons that life in States wasn’t easy, and he doesn’t want to risk anything with his career at the moment. This was his big break and he had a lot riding on his shoulders. He had to care for his parents, his family and us, with this job. I had no option but to agree with him as I was too blind in love. (It’s good to call it this way now)

When he came to India for a month, my blinders had to come off. Since we had decided to get married, I had mentally prepared myself to face my parents with this truth of choosing a man from a different community. But when I met him after all that time, he didn’t seem like the person I had fallen in love with. My friends cautioned me of this changed man.

However, I was too happy to have him back, and chose to shut my eyes and ears for everybody who said anything against him. After he had settled back home, I brought up the topic of our marriage plans again. For the first few minutes, he stayed quiet and participated in the discussion but my constant persistence on when he would accompany me back home, made him lose his calm. His temper soared and an argument ensued.

And out of nowhere, he uttered those 4 words "It was a mistake loving you."

It was like my worst nightmare coming true. I was crushed under the weight of his harsh words. I was devastated; I still gave him the benefit of doubt and assumed he hadn’t meant what he said. I tried to enquire what went wrong but what he had to say hurt me even more. He said that his career took precedence over our marriage, as it didn’t feel right to hurt his chances at work right now.

He added that his parents were a little doubtful of adjusting with a girl from another community, as his cousin just went through a terrible marriage (a fact that not once had he mentioned before). He then spoke about how coming to my hometown to meet my father means leaving his own parents and he needs to be there to care for his mother. The more he spoke, the less things made sense to me. I begged for him to re-consider his thoughts but he refused.

We decided to part ways, but still remained friends, secretly some part of me hoped that it would bring us back together. But one day he broke the news of him getting married to the girl his mother had chosen for him. As I was in the ‘friend zone’, I decided not to react badly. Instead, I tried to feel happy for him. I finally made peace with the fact that some things are not meant to be and chose to give myself some time to get over him and focus on myself.

A month after he got married, we bumped into each other at a common friend’s wedding. He had come there with his wife, who I met for the first time. There, at the party I found out that he was dating this girl before he married her. On enquiring and confronting him, he finally came out with the harsh truth. He had met this girl in the States while working on an assignment; they fell in love and decided to get married. And in between all this, he cheated on me with her, never once bothering to let me know, as he feared he would “hurt me”. I couldn’t tolerate his duplicity, and right there, took him out to expose him in front of his wife.

While I went towards her, he went onto say “Girls like you are not marriage material. You are the ones who should be used and left as you give in to the demands of what your lovers expect”. I was stunned at the words that came out of his mouth, I couldn’t believe this was the man I was once in love with.

I am 31 years old today and still not able to trust guys my parents choose for me. This article is for all those girls who carry blind faith in men they feel will stand by their promises. Life is too short to waste on boys who strangle you in something called LOVE. This definitely doesn’t mean that you should never fall in love but when you do try to use your head over your heart.

LIFE IN THE TIMES OF CORONA
DIRTY PICTURE
BAKKAR. CHAI. SUTTA
LIFE IS TOUGH
LET'S FACE IT
YOUR STORY