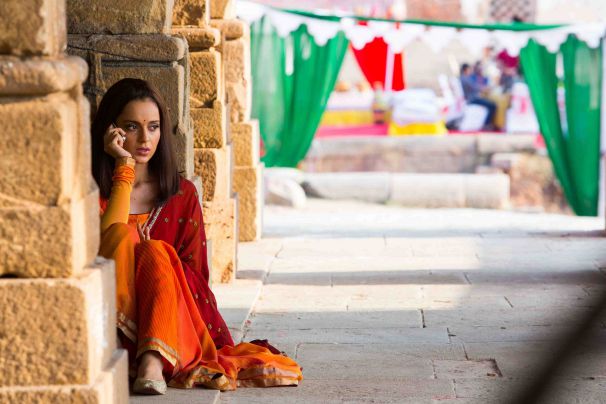 I am a 25-year-old girl and this is the age when we begin considering all the alliances that come our way. Most of my friends are already married but almost all of us have several questions about how a marriage works - especially an arranged marriage. We are fascinated and surprised every time we think about the concept of ‘marriage’ itself. And somehow we simply cannot tune into the thinking of people who were born in the 1950s or 1960s.

The first question that comes to all the girls’ minds is probably, “Why does a girl have to wear a saree when the prospective groom comes to ‘see’ her?”

We all know that we expose a lot of our skin when we wear a saree. When the girl enters the room where the guy and his relatives are sitting, she can feel all the eyes scanning her from top to bottom.

It is as if all of them are raping her with their eyes.

What is she supposed to do under such circumstances? She becomes conscious of all the people looking at her but is also very conscious of the fact that she has to take care of her saree. Usually, the girl’s parents are full of enthusiasm so after a while, they will ask their daughter to serve them some tea.

Hell! Now she also has to manage a tray full of teacups.

One of my cousins had worn an anarkali dress when the prospective groom and his relatives had come to see her. But she was asked to change into a saree.

Did she change as a person when she changed her dress?

Why couldn’t they talk to her when she was wearing an anarkali? Another cousin of mine was rejected because the guy’s father noticed that one of her toe fingers was crooked. Obviously, the guy's father had scanned the girl thoroughly.

How can we decide if the person sitting across us is the right partner for us by talking to him for just 5 minutes? How can we say that he is the one for us?

Can we gauge their inner selves and their true worth by the small conversations that we have with each other?

One of my friends was telling me about how a girl she knew had got an alliance from an NRI. They had chatted with each other a couple of times before they got married. She flew to the USA after getting married to him and then realized that the guy was gay. So she divorced him and came back to India.

Who is responsible when such things happen? Should we blame the girl’s parents because they thought that things are always perfect in an arranged marriage?

Another friend of mine is being tortured by her in-laws. She couldn’t share any of this with her parents because she did not want to hurt her parents. I wonder why she decided to ignore her gut feeling. How did she know that he was the right person for her?

What does her husband do when she is tortured by his parents?

Why is it mandatory for the entire family to like the guy or the girl in an arranged marriage? Let's be honest about this. In all probability, the parents may end up living for another 10 years or so after their children get married. Why then do they feel that they too have to love the girl or the guy?

Is it not enough that the girl and the guy like each other?

I have come across many arranged marriages where the girl and the guy liked each other but the marriage did not take place because one of the parents did not like the girl or the guy. Most of the time, the guy’s mother creates a lot of drama at such times.

Aunty – please keep quiet. Let your 28-year-old son decide for himself at least once in his lifetime.

It is not enough if the parents alone approve of the girl or guy. Even the relatives of both the families have to fall in love with the girl or the guy. In fact, quite a few marriages have been cancelled because there were disputes between the relatives.

Does anyone ever think of the emotions of the bride and the groom at such times?

Does anyone even bother to ask them about such things? No! Will any of these relatives help them out when they need their help at a later stage? No! They will be busy at such times.

And then there is always the issue of dowry. Why do the girl's parents alone have to give dowry? Let’s not overlook the issue by saying that dowry no longer exists.

Only the manner of asking for dowry has changed.

People will coolly say, “Give whatever you want to your daughter. We are not bothered. But we were just curious to know how much you plan to give her!”

Recently a man called my mom and said, “We have 500 crores. How much can you give?” He did not even know the kind of person I was or how I looked etc. He got our number from a marriage broker and these were the first words that he used to start a conversation with us.

Are 500 crores not enough to take care of your only son?

What will you do with all that money? Why do you want dowry when you already have so much money with you?

One of my friends agreed to get married to a girl simply because there was no reason for him to say ‘no’ to her. His sibling was forcing him to get married. Even though they got married, he couldn’t express his love to her and did not become physically intimate with her. He finally developed suicidal tendencies because he felt so unsatisfied in his life.

But he had to continue living with her because he had married her. They are like friends living in one house.

Is their marriage serving any purpose?

I have discussed only the arranged marriage cases. I agree that there are tragic love marriage stories too. What is the purpose of getting married when we need to make so many compromises all through our lives? We all get only this one life to live. Why do we have to spoil it by getting married?

Not all marriages are disastrous. No marriage is idyllic. No man is perfect. No woman is perfect. No relationship is perfect either. Marriage is a beautiful bond where partners become soul mates when they face the ups and downs of life together. Societal norms are flawed but they will surely evolve over time. That does not mean we stop believing in the institution of marriage itself. Share this story if you too believe that being married is a wondrous experience.

I Became A Mother After Two Years Of Marriage, To Fur Babies And It Is Just As Fulfilling