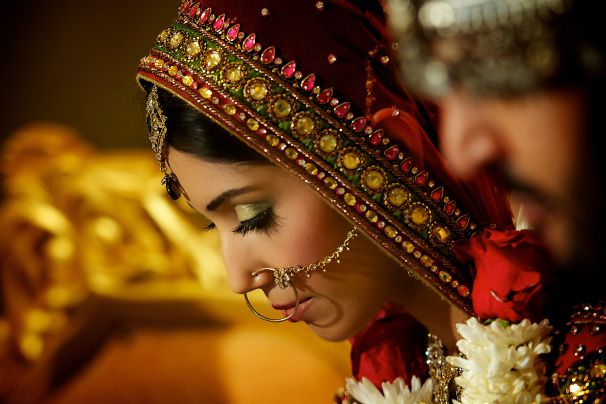 The big fat Indian wedding is up for a swing, a jolt, a makeover of a different kind.

The wings of this lavish affair, a mandatory show of opulence by the rich and the affluent in the country may soon be chopped off and it may have a rough landing, courtesy the fancies of MP Ranjit Ranjan (don’t go by the name, she's a woman herself). She is determined to have a stamp of approval for it in the Parliament soon. The proposed bill has gathered momentum and is already making a noise, for very obvious reasons.

However, for me it fails to strike the right note and the basic intention for its inception smells of the conventional mindset that centres around marriage being the sole aim of a woman’s life.

The bill states that if a family spends above Rs. 5 lakh on a wedding, it should contribute 10% of the amount on marriages of girls who belong to poor families. Families intending to spend more than the proposed amount should declare their expenditure to an authority and 10 percent of the same should be deposited in a welfare fund to be set up by the government to facilitate marriages of poor girls.

Of course, the honourable Member of Parliament, we certainly agree with you, that these days the tendency of celebrating marriages with pomp and show and spending lavishly is growing in the country. Marriages are more about showing off your wealth and as a result, poor families are under tremendous social pressure to spend more as well. You intend to seek a cap on such extravagant affairs but isn’t your focus too decrepit, and marred by a conducive plan for their upliftment in the wake of the growing concern for women empowerment?

The whole purpose of your bill zeroes in on the 'bechari poor girls being benefitted by funding their marriages', as if it's marriage alone that promises to elevate their destitute, un-resourceful and under-privileged lives. “Padhegi beti toh badhegi beti” only to be married off to serve her man for life.

A number of other government funded girl child and women welfare schemes become meaningless if the motive is finally to solemnise their existence into an alliance instead of giving them the right opportunity to. Why do we have such women parliamentarians who heartily embrace the obsolete and conservative   patterns of thinking, crowning marriage as the ultimate necessity of a woman’s life?

What if you could think of more encouraging and benefitting ways of utilizing the funds? Why not focus on their education or employment rather? If and when collected, why not divert those funds towards making them self reliant, independent beings by ensuring higher education? Will their destinies evolve for the better good or would their lives become more meaningful once they are married off?

How about a bill that proposes that marriages be held among two individuals where both man and woman are educated enough to earn and respectively support themselves by not being dependent upon each other? In that case, wouldn’t her financial independence save her from a torturous relationship or cease her suffering, where usually she has to pretend like a stable homemaker, smile and sustain herself; where she can’t think of revolting because she has nowhere to go with her offsprings, no livelihood and not a supportive set of parents either.

A somewhat similar decision was passed by the Kerala government two years ago. The state government had taken up the cudgels by launching a weekly lottery scheme called Mangalya lottery. The step was initiated to mobilise funds for providing financial aid for wedding of girls from poor families. I don’t know what to term such a move. Why is the support of a man as her legal partner needed to glorify her being or to provide a mere relief to her worried parents?

The proposal to curb the hefty expenditure on Indian weddings is a welcome move but attempting to teach a lesson to the society, to eventually propagate and lend a helping hand to the poor girls for their marriages does not amount to charity under the government welfare schemes.

The idea itself doesn’t foray into the realms of building a progressive society where education, employment and exercising their fundamental rights are overshadowed by the superficial significance attached to marriages.

Give her a foundation to set her feet firm. Give her wings to set herself free when she doesn’t need to go on beyond the levels of endurance. Stock her artillery with weapons of confidence and self-dependence instead of suggesting that she is best suited to serve a man.

The author has a point and if you agree, please share this story.