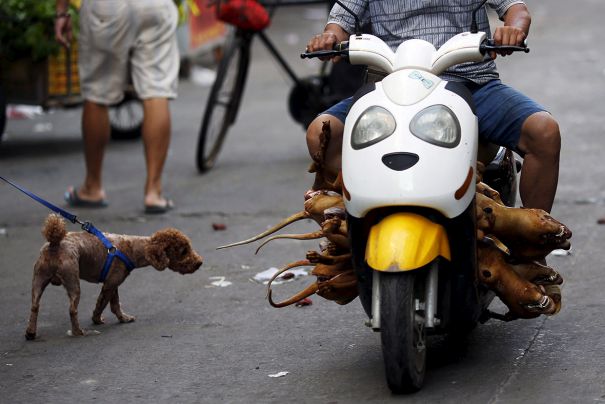 "It's a DOG'S life!" did you say? In today's world, it is life of being pampered, being cared for and becoming a Facebook celebrity as hordes of slaves worship the dog. Dogs have been man’s best friend for a long time, but today they are the mental masters for millions.

There are over 525 million pet dogs in the world, and that’s about HALF of India’s population. Do you understand that you don’t need to stand for animal rights by citing the dog as an example? They are nowhere near the endangered species list, to begin with!

Let's look at how the Eastern Cougar (this is a real animal, by the way) unlocked a new achievement by leaving the Endangered Species list and making it to the Extinction list. I am not sure if you know about the last male white rhino which is under armed guard, or even a few million other species which are pretty much being screwed over and are on the verge of disappearance. Tell me now- is your armchair cozy enough? From the comfort of your air-conditioned homes, you have a problem with the dog eating festival in China. This, to you, is the epitome of cruelty. But, but- What about the chicken 65 you just finished with your beer?

In your head, "Halal" sounds like a legit thing, but why do you REFUSE to think of how the animal was slowly bled to death. I want to take a minute to explain how gruesome that is- it is so painful that the Japanese Samurais used it as a form of honour suicide.

They bled themselves to death for days to prove that they are worthy of their own death. In my city, the stray dogs rule the roads after 10 pm in the night. No motorist is safe as these dogs chase after their two-wheelers when they ride past them. Some of them get bitten and end up having an accident, but they don’t ever harm the dog. Your great defense is that dogs are voiceless creatures which have been deprived of their environment. So tell me this, are the Chinese giving them a cruel death, or are they saving them from a cruel life? Do you want them to continue living a voiceless life as they eat out of the dumpsters and chase motorcyclists?

I'd like to see you adopt a stray instead of a Beagle or a Rottweiler. You'd do any kindness to your posh dog and pelt stones at the strays that "trouble" him. Or maybe, you'll feed the stray but you'll never bring him home.

The "love" you show for the stray with all your rotting leftovers have bulked them up- they look like mini werewolves now. One recent report said that these dogs attacked and killed a little baby. The dogs picked up the baby from its crib and took him off for what seems like a feast for them. Do you realize that the dogs you are feeding are actually growing wilder by the day? You don't want them to be impounded, you don't want them to be neutered, but people in China want to EAT them and you lose your sh*t.

What's your PROBLEM? I understand that your boyfriend/girlfriend dumped you and your life depends on your dogs for companionship, but your forever-alone problems are turning the streets into a dangerous place. If you were such an animal rights crusader, you would give a damn about other EQUALLY VOICELESS creatures too.

Not one of you even thinks that rats are worthy of a life. Let them be eaten or tested in labs, you really don't care. Why don’t you adopt a chicken instead of eating one? Why don’t you protect the rights of goats? Please spare us your shitty hypocrisy. You're that d*ck-head who hits the Muslim area this Ramzan season because "Machaaa! Haleeeeem!"

I'd like to see you SUPPORT the beef ban just as vehemently as you're opposed to the Yulin festival. I know you won't do it because you have no mind of your own and you'll only swim towards whichever direction social media pushes you. I sincerely hope that you are bitten on the same hand that feeds pedigree to these strays.

Daitya does multiple things. Economics, Branding, PR, Consumer Behaviour, and some more keywords that makes him seem corporate. But it's not just that. He knows things that they choose not to tell you. And he's here to spill the beans.