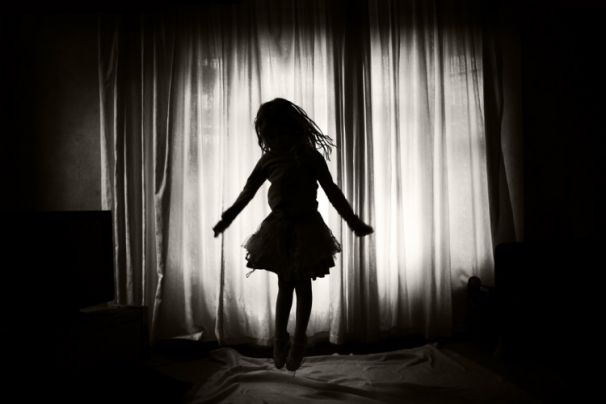 The world is beautiful, isn’t it? The Sun is blooming at its silhouette, rivers are flowing amidst the tranquility of the wilderness. Birds are chirping in the vastness and the most fated species, “humans” are busy playing their power game, the game of dominance! How can this world not look beautiful to us? We have got everything in this world to abuse, to molest, to thrash and to kill. So what else do we need? What more can we ask for?

Though we have everything to please our malicious selves, I am against giving birth to a daughter. For I know that once she grows up, maybe just old enough to walk, she will be pounced on by a thousand different hands, leaving her with scars on her chest, thighs and genitals. They are waiting to malign her innocent soul, bruise her shining eyes, and blacken her pink lips.

They wouldn’t even wait for her to reach puberty, as they had already devised a gruesome plan to slaughter her femininity among a gathering of shameless eyes that are waiting to witness the scene of inhuman destruction. But, I won’t let them win. I have a stronger and a better plan. Seeing these ruthless men behind our daughters, I have now turned an antagonist towards the “Beti Bachao” campaign. Why do you need such campaigns, after all, because what we would do, is saving our daughters only to get raped and murdered? Why would I even support such campaigns?

I have now decided, that I will rather kill my own daughter than allow her to fall prey to these men who want to rape her, whether in a temple, mosque or a church, no land is pious enough for these vultures. "Beti Maaro” should be the next campaign that needs to be launched by all the mothers who want to protect their daughters from rapists disguised as policemen or national leaders.

A mother gets tired waiting for her daughters to return home safe, from dusk to dawn her heart keeps thumping till she sees her daughter. For she knows she isn’t safe anywhere, not even while peeing in her own school toilet. What if a bus conductor comes and rapes her by closing her mouth and killing her screams? Or, what if her school teacher unbuttons her shirt because she falls into the category of introverts, and is a subdued soul. Now, why would I want all these tensions that could unnerve me to nothingness? For once I had thought, that this world would be a better place for my daughter, I would give her secure environment to bloom like a lotus. But I was wrong just like those other mothers who have lost their daughters.

They know the true meaning of suffering because they have seen those bite marks on their child’s thighs. They had to take their daughters to doctors to confirm molestation charges. What can be more horrid an experience? Are these reasons not enough to campaign against giving birth to a daughter? Today it is a temple, tomorrow it can be your own home, where you hear the last shrieks of your molested daughter. And just like today, your daughter’s rapist will walk away hiding under the cloak of Netas and SPs. And, trust me these protests we keep seeing when a girl gets raped haven’t done anything to shake our judicial system. It is just a mere follow-up that somewhat helps to comfort us after every rape.

But if you still want to give birth to a daughter, you should probably teach your girl to shoot with her AK-47 instead of giving her a pencil to sketch, thereby complying with the saying, “our safety is in our own hands”.

Share this story because unfortunately, the writer is not exaggerating. The harsh reality is such that this fear is prevalent among all of us.

I am a writer who looks for new ways of self expression and learning.