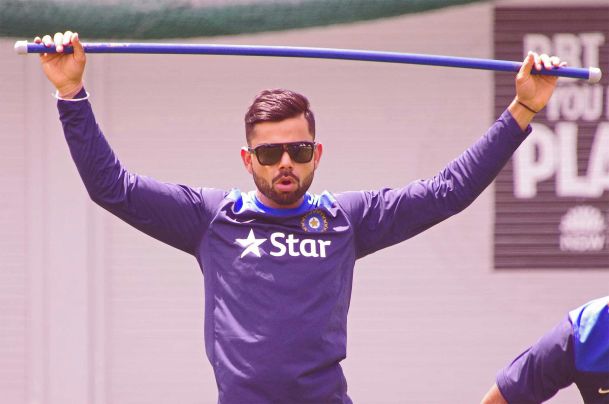 Kohli Saab,
Aah well. There we go again. When your bat doesn’t talk, your mouth takes over. Motor Mouth, much like your ‘Dilli-ki-feisty’ stereotyped girlfriend. Ok that was just for reference. I don’t mean to attack your personal life. But I couldn’t resist. You just did not learn anything from the ugly spat with the journalist in Australia, and now you go ahead and create yet another foot-in-the-mouth moment.

"Personally, I was very disappointed. In last five years, the number of matches I've helped India win and the consistency with which I've played is more than anyone else in the team. I don't think there's anybody else in the team who has done better than me." Whoa!! That’s a lot to digest. You aren’t disappointed. You are miffed and pissed. This rant of yours will haunt you for a long time to come. This rant has, sure, hurt us all and am sure your team mates are hurting too.

Cricket is a team sport, so even if you are the best player amongst the chosen 11, you cannot win a match without the contribution of the other 10.

For each run you score, there is a non-striker saving his wicket to ensure victory. Each bowler and fielder is stretching his sinew to save runs. And you say have won the team games more often? A very juvenile comment. You have undermined Dhoni’s 91 in 2011 WC finals. You have undermined Yuvraj overcoming personal frailties, to win the world cup.

We all, the rational fans (we are a majority), agree that the media was unfair to you for they made veiled attacks on your personal life, your rare failure in a crucial match. Totally uncalled for. But criticizing media is one thing and towering your achievements over other cricketer’s is another. The latter makes you a megalomaniac.

Media is a sham and worries about TRPs alone, a case in point was Arnab’s tirade after the semi-final loss. Where not the Nation, but only Arnab wanted to know. So to take them seriously was your first mistake. To think that media’s sentiments is the same as those of your fan’s, is your second mistake.

The sea of humans you see in the stadium, who cheer and whistle for you, run behind the team bus, chase you for autographs, pictures. That my friend is the sentiment of a cricket fan. We supported you no matter what the media said. But that was only till yesterday. You have seriously chaffed your stature in our hearts by saying, you are better than others.

It’s a win for the media, for they again managed to break you and let you rant. Reminds me of what the Joker said in The Dark Knight.

“I took Gotham's white knight and I brought him down to our level. It wasn't hard. You see, madness, as you know, is like gravity." You were the white knight, you were the chosen one. Until now.

Sachin, in 2006, was booed by his aamchi mumbai crowd for not scoring runs against England. This was a man who had consistently delivered for 17 years, and a rare failure was booed. Media had termed him “Endulkar” and had written his career’s epitaph. His response. Silence and an amazing 2007-08, and beyond, with the bat.

When Dhoni’s head was on the line and his captaincy was questioned, did he go about saying that he was the most successful captain of India and didn’t deserve to be treated this way? Dhoni was the hero India deserved, but not the one it needed at that time. And you are scowling over social media memes and jokes about your girlfriend?

The fans supported you all through the on field tiffs with the Aussies. In hindsight, the Australian media and players were right in calling you a brat. You just proved it. Precisely why the likes of Dhoni, Tendulkar, Laxman, Dravid are still revered. For deep down, they knew fans and their team mates mattered to them most.

You may break many more records, become a run machine. But trust me, you will never be able to climb back on the pedestal, the fans had perched you on.

A global Indian :) , born in the north, bred in the south. A blogger, photographer, runner and a social commentator. Live and Let Live. Hate hypocrites and pseudo liberals. No religious/group allegiance.